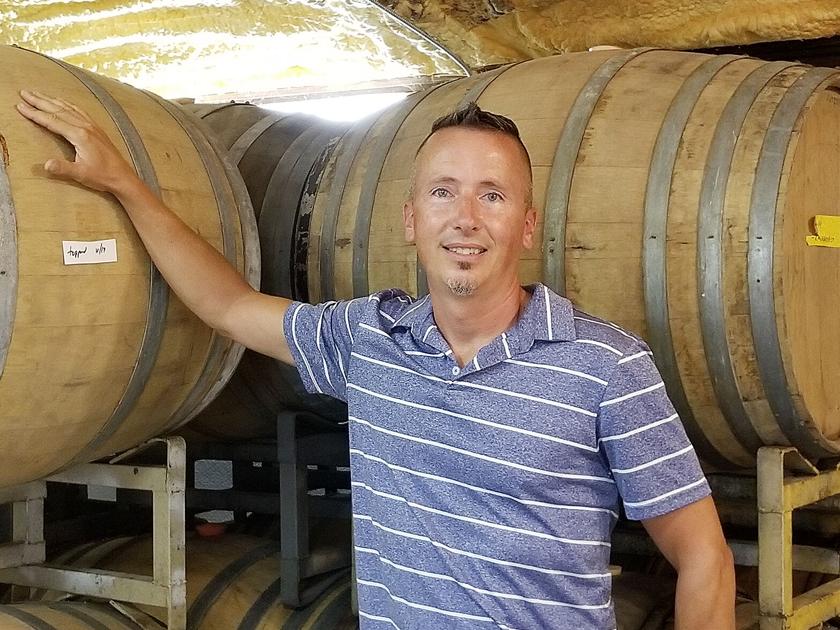 Jason Hanson and his father, Clark, started Hanson Vineyards 15 years ago in Monitor, Ore., on land their family has farmed for four generations.

“I had been working in Washington, D.C., and knew I wanted to come back to the Northwest,” Jason Hanson said. “Around 2002 my father and I started talking about starting a winery.”

A few years later things were underway and by 2008 Hanson returned to Oregon’s Willamette Valley full-time. During his time in D.C., he attended graduate school, worked in marketing and advertising, started his own political research firm and, for several years, ran a bar.

“When I came back Oregon was going through its second wine Renaissance and I was already a big fan of Oregon wine,” Hanson said. “My dad had always been a hobby winemaker, so we didn’t feel like we were starting totally from scratch.”

Hanson Vineyards is a whole-family undertaking, just the way they like it.

“I don’t buy fruit from anyone and I never will,” he said. “Making wine from our fourth-generation family farm is the end-all be-all of what we do.”

Hanson’s biggest production wine is a red blend, unusual among Willamette Valley wineries that tend toward Pinot noir and Chardonnay as their flagship wines.

In addition to a thriving wine club, the vineyard distributes around 1,200 cases a year throughout Oregon — and in Vermont, due to a chance connection that bore fruit.

Hanson’s background is advantageous in an industry answering to several local, state and federal agencies whose requirements include pre-approved labels and legally designated areas on the property for the making, pouring and storing of their wine.

Having these buttoned up allows Hanson more time to “play” and he comes out with a new wine every year. This year’s release is a cold fermentation of the three Pinot sister grapes.

“It’s a combination of Pinot gris, Pinot noir and Pinot blanc,” Hanson said. “I don’t know of anyone else making a wine quite like that.”

He named it “Tre Sostre” or “Three Sisters,” a nod to his Norwegian heritage.

Throughout, Hanson has enjoyed being a member of the Cascade Foothills Winegrowers group, especially the camaraderie and opportunity to tap into a vast storehouse of knowledge.

“That’s the good thing about our group,” he said. “Everyone is willing to share because we are all in the same boat.”

Lately, discussion has centered around the possibility of future supply-and-demand issues.

“There is a growing recognition on the West Coast that there are too many grapes in the ground right now,” he said. “California is probably overplanted by at least 60,000 acres and there’s a growing understanding in Oregon that we need to take a breather on putting more fruit in the ground and absorb the amount that’s there. Without a doubt it is a word of caution for our industry.”

There are more wineries in Oregon than ever before; over 800 now, with an average of two new wineries opening a month, Hanson said, “but in our crazy world right now (think COVID-19) there are a lot of people holding their breath, just wondering how things are going to proceed.”

Home Videos The WORLD of WINE – Wine News. Cheap wine, tasting notes and cooking with wine The World of Wine – May 2021 … END_OF_DOCUMENT_TOKEN_TO_BE_REPLACED

How to visit Napa Valley on a Budget. In this video Carson and I explain a few ways to enjoy Napa on the cheap. Tip and advice about how to visit Napa … END_OF_DOCUMENT_TOKEN_TO_BE_REPLACED

Home Videos Get To Know Argentina Wine | Wine Folly If you love Malbec, Argentina is your ultimate wine region. But that’s not … END_OF_DOCUMENT_TOKEN_TO_BE_REPLACED