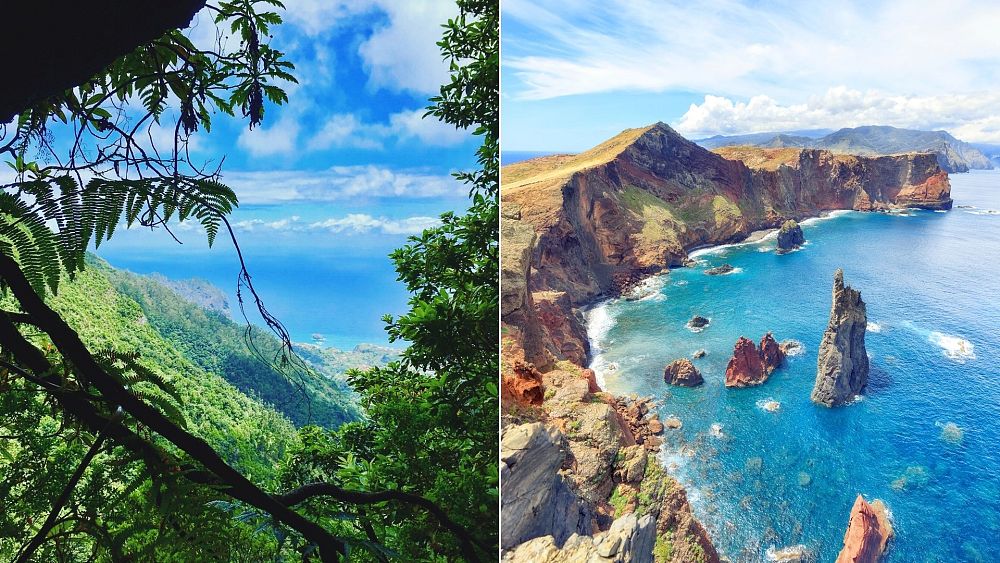 Pull up your maps app and pick a spot in the middle of the Atlantic ocean – not as far west as Bermuda but south of the Azores. It will take some zooming in to locate this tiny, volcanic island, but once you find it, you’ll never want to leave.

I had never been somewhere as remote as Madeira. Although it’s one of two autonomous regions of Portugal, the island has its own rich culture and a completely unique landscape of dramatic cliffs and botanical gardens.

But it wasn’t a smooth introduction to this island paradise.

Touching down at the main airport in Funchal, one of the shortest runways in the world, is not for the fainthearted. Cristiano Ronaldo International Airport (yes, Madeira is the birthplace of the famous footballer) is known for being dangerous – its 1,600 metre runway is cut short by high mountains and the sea.

The extreme gusts of wind created mean pilots have to take special training before being allowed to land here.

But after some turbulence and bonding over the adrenaline rush with those sitting near me, we make it onto the ground, only to be met by rigorous COVID checks (probably the reason Madeira has managed to remain on the Green list!).

Once you get through airport security and grab your luggage, you pull up your previously downloaded ‘Madeira Safe’ app which has your own personal barcode to show a team of officials.

At this point you get directed to either a light green or a dark green queue of people, with markings on the floor to show you the way.

Dark green means the app has processed your negative PCR fit-to-fly test (mine was from Qured) and you’re free to leave, but light green means the result hasn’t been accepted yet so you have to speak to a team of nurses. They inspect your app and ask for proof of either a double vaccination certificate or your PCR test before you can finally leave the airport.

Despite the slightly lengthy process, I found that I had a lot of respect for this thorough infrastructure as it made me feel safe and secure in a new country.

‘The best hotel on the island’

The smell of eucalyptus lingers in the air as we drive into the main town of Funchal, lush forests on one side and a vibrant city on the other. We arrive at the Savoy Palace hotel (‘the best hotel on the island’, my taxi driver exclaimed on the way there) late on a Friday night.

The taxi journey had given me a good overview of Funchal – lights glistening up into the hills and down into valleys, with the sea shining under the full moon. I certainly got a good first impression of Madeira.

The Savoy Palace Hotel is grand, with sumptuous interiors of chandeliers and marble staircases, yet cosy, with velvet armchairs and plants lining the windows.

The hotel was a joint venture between the island’s top designer, Nini Andrade Silva, and RH+ Architects, telling the story of Madeira’s traditions and culture through striking design.

After a light meal overlooking the pool by night, I happily collapse into my king-sized bed on the 16th floor.

Soaking in the panoramic views of the ocean, I fall asleep, ready to explore all the island had to offer.

A haven for outdoor adventure

As the winner of ‘Europe’s Leading Island Destination 2020’ at the World Travel Awards for its outdoor adventures, it is clear Madeira isn’t going to be a beach holiday. In fact, there aren’t many beaches at all due to the mountainous topography, but the cliffs are even more impressive.

I spend my days trekking around the island, visiting black sand caves and swimming in natural pools. A jeep tour with Madeira Mountain Expeditions takes us to the famous forest of Serra do Fanal.

On the way up, our tour guide tells us to stand up at the back of the jeep to really inhale the fresh forest air and duck every time we encounter a branch. It is completely exhilarating and the views, 1,150 metres above sea level, are breathtaking.

Fanal, as it is known locally, has some of the oldest trees in the world.

It’s home to the largest surviving area of laurel forest, which is protected by UNESCO world heritage and is an eerie sight to behold. This part of the island is subtropical and the volcanic microclimates mean it is often shrouded in mist, giving you the feeling that you’re on a film set.

Huge, gnarly trees stretch out in front of you, in and out of fog, and the air is wet and warm.

We do some forest yoga while up in the clouds with a local teacher – which feels as if I am sinking into the earth itself as I manoeuvre into downward dog.

Another highlight is Cabo Girão, the highest cliff in Europe and the second highest in the world. The viewpoint has a suspended glass platform (I tried not to look down) where you stand directly over the ‘fajãs of Rancho’ with a magnificent view of the fishing town Câmara de Lobos.

In the evenings, I would come back from a cliffside hike or a waterfall excursion and slide into the rooftop infinity pool to shake off that hard earned sweat from the day. I even opt for a massage at the spa one evening because – why not?

The leafy room mirrors the island’s landscape with lagoons and cascades and a rare Himalayan salt room.

As for Madeiran food, there are several delicacies that take my fancy. Many restaurants serve the typical dish of tuna steak with fried maize, which is delicious.

Then there’s some of the gooiest garlic bread you’ve ever tasted, called “bolo do caco”, which comes as a starter with almost every meal.

But I fall in love with Espada, the signature dish of the island.

It translates to ‘Black scabbardfish’ and is a soft, white fish that is very light in the mouth. The best bit is that it comes covered in fried banana and maracuja (passion fruit)…somewhere between a sweet and savoury dish.

Alongside the seafood, dinner time in Madeira calls for a ‘poncha’, the traditional Madeiran aperitif, made from honey, fresh lemon juice and a white alcohol deriving from sugar cane.

Just like a Cognac or strong whiskey, it hits the back of your throat as you swallow, but soon turns into a fuzzy glow which keeps you warm all evening, even when the sun goes down.

Spoilt for choice by the restaurants

We find there is no need to leave the hotel for dinner as it has so many restaurants to choose from.

I go for a light bite at the Alameda during the day, indulge in some sushi at Jacarandá or visit the real showstopper – Galaxia – the rooftop restaurant where we dine on our last evening.

With a view of the island by night and a ceiling full of stars, Galaxia is a palatial restaurant. Of the five-course tasting menu, I am won over by the tender Wagyu beef skewers and fermented fish with mango avocado and chilli.

It all comes with a wine pairing, which is a mixture of fortified wines, white, red and rosé – a chance to taste real Madeiran produce from the many vineyards on the island.

Safe to say I had a cloudy head the next morning…

After four days of adventures, followed by unwinding at the hotel and some excellent food, I am still not ready to leave.

I will take a lot away from Madeira. The exceptional service in every restaurant and some of the most welcoming locals I have encountered in Europe. Even as a non-Portuguese speaker, it’s easy to get around. Everyone I met was almost fluent in English, as the island is so heavily dependent on tourism.

Being so remote, in the middle of the Atlantic and just west of Morocco, allowed me to cut off from the digital world and immerse myself in nature. It is a truly magical island that definitely deserves a spot on your bucket list.

Maeve Campbell travelled as a guest of the Savoy Palace Hotel in Madeira.

Home Videos The WORLD of WINE – Wine News. Cheap wine, tasting notes and cooking with wine The World of Wine – May 2021 … END_OF_DOCUMENT_TOKEN_TO_BE_REPLACED

How to visit Napa Valley on a Budget. In this video Carson and I explain a few ways to enjoy Napa on the cheap. Tip and advice about how to visit Napa … END_OF_DOCUMENT_TOKEN_TO_BE_REPLACED

Home Videos Get To Know Argentina Wine | Wine Folly If you love Malbec, Argentina is your ultimate wine region. But that’s not … END_OF_DOCUMENT_TOKEN_TO_BE_REPLACED