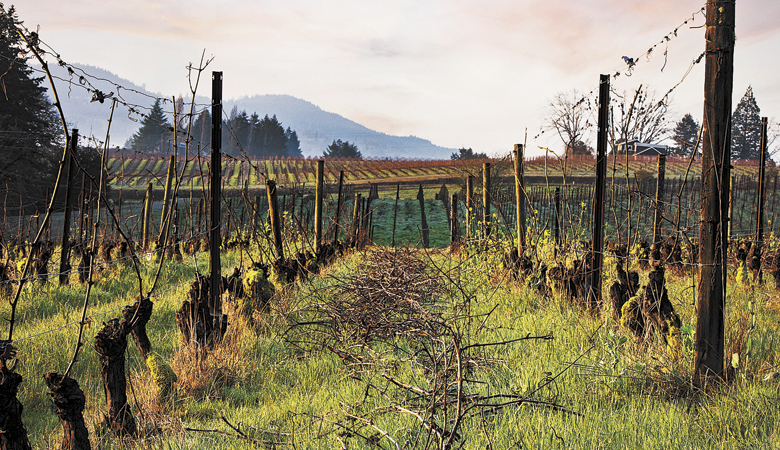 Resting on the western edge of the Willamette Valley’s Chehalem Mountains, the Ribbon Ridge AVA measures merely 3.5 miles long by 1.75 miles wide. Not only is it the smallest appellation in the state, Ribbon Ridge is, perhaps, the greenest, as well.

When Harry Peterson-Nedry started his quest for vineyard land in 1979, he was directed to a parcel on Ribbon Ridge Road outside Newberg. A year later, he and his family began Ridgecrest Vineyards, the first of its kind on Ribbon Ridge.

“The aspect, soils and open south-facing hillside ticked off boxes on my checklist,” Peterson-Nedry, also founder of RR Wines, recalled. “The fact that they overlooked Dick Erath’s original Chehalem Mountain Vineyard a half-mile away sealed the deal.” He laughed, “Aww, the innocence of not knowing what I was doing.”

Peterson-Nedry says since Ridgecrest’s first harvest in 1985, the wines have been uniformly well-balanced and ageable. Pinots with dusty blackberry flavors, firm structure, as well as savory, earthy qualities. Recognizing this consistency over time and between wineries resulted in a serious conversation about establishing Ribbon Ridge as a distinct region.

In the mid-’90s, growers within the northern Willamette Valley discussed submitting AVAs (American Viticultural Areas) for approval, but, during a 1996 meeting, concerns raised about creating a divisive atmosphere paused the process. Some five years later, a similar gathering concluded the time had come. According to Peterson-Nedry: “With a flood of new players, concern over dilution of the historical narrative required a crisper set of definitions to differentiate Willamette Valley terroir.”

A small committee formed to establish the Ribbon Ridge AVA in tandem with a broader coordinated effort to precisely define the other key growing regions of the northern Valley. While awaiting results from the TTB for three years, the same group met occasionally, asking “Who are we?” and “What makes us special?” — not to mention, “Would you pass that bottle of wine?” Together, they developed a vision and set of principles influenced by Biodynamic farmers such as Doug Tunnell of Brick House Vineyards, the late Bryce Bagnall of Bryce Vineyard and Mike Etzel of Beaux Frères, as well as LIVE practitioners like Peterson-Nedry.

Then and now, growers pledge to honor the Ribbon Ridge Statement of Principles, which contains a clause for chemical herbicide-free farming. “This commits all our members from using any glyphosates (i.e. Roundup),” explained Dan Warnshuis, owner/winemaker of Utopia Vineyard and president of the Ribbon Ridge Winegrowers Association. “That said, many — if not most — of our vineyards are farmed either organically (as is the case with Utopia) or Biodynamically.”

Warnshuis admits it took a couple years of convincing to get the entire association to agree not to use glyphosates. “The cost issues with chemical-free herbicide for weed control means you’re going to have to utilize mechanical weeders or hand labor instead, which are both more expensive.” But as news of the terrible effects of chemical herbicides became more widely known, it became easier to convince growers not to use them. “I see this as a first step to getting all our members to eventually farm 100% organically or Biodynamically,” he said.

Because the top of the ridge twists and turns, Ribbon Ridge was initially a name coined by Colby Carter, who migrated from Missouri to the well-known farming area in 1865.

Protected by geographical features to the north, south and west, Ribbon Ridge’s grape-growing hillsides are slightly warmer and drier compared to the adjacent valley floors. Its moderate climate is well-suited for early grape growth in the spring, consistent and even ripening over the summer and a lengthy, full-maturing season in the fall.

“Since I first visited the Willamette Valley 26 years ago, I have always been impressed by the wines from Ribbon Ridge,” noted Bruno Corneaux, owner/winemaker of Domaine Divio. “[The soil] is sedimentary with a very high level of clay, just like my family vineyard in Burgundy.” He jokingly calls it “Clay-doh.”

He continues, “The wines show a finesse, texture and elegance that reminded me of the most Burgundian wines. When they age, they tend to have delicate forest-floor, mushroomy aromas that I love in older Burgundian wines.”

Brick House owner/winemaker Doug Tunnell felt certain Ribbon Ridge would be a unique place for growing wine grapes. Unlike other AVAs, the region contains a nearly homogenous soil type, stands apart geologically from other formations around it and is sheltered on three sides from incoming weather systems. Tunnell says, “In a nutshell, I’d say Ribbon Ridge wines come across as generally more concentrated as a result of the above. Lower yields, thicker skins, darker juice and routinely higher tannins.”

Committed to growing grapes in a way that respects soil, environment and people, Tunnell established his entire 40-acre vineyard with organic certification in mind; he first planted vines in May 1990. Brick House has continued as organic growers, adding Demeter Biodynamic certification as well. “I encouraged the AVA to consider becoming the first certified-organic AVA back in 2010 or 2011,” he explained. “So, the AVA’s commitment hasn’t changed Brick House; we’ve tried to change it!”

Tunnell admits one becomes more protective of the soil when living on it, and, yes, organic viticulture has its challenges. What do you do about weed competition among the vines? How do you keep powdery mildew at bay? What types of posts are permissible given the ban on copper-treated wood enforced by organic certifiers? Though there’s a long list of obstacles, he says none of them are insurmountable; they just require determination and imagination to resolve. “Since we live in a house in the middle of our vineyard, I can’t overstate how important and rewarding it is to succeed in growing wine grapes on an organic program, from the standpoint of our health and the well-being of our soils, vines and wines.”

Corneaux, a longtime proponent of sustainable farming, acknowledges the Ribbon Ridge AVA philosophies were not much of a stretch for him. He recalls, “Before coming to the U.S., I developed the first vineyard in French Polynesia on an atoll of the South Pacific. There, I had to think through all non-invasive practices to preserve the fragile ecosystem and be as sustainable as possible.” Bringing those techniques with him, he’s been using organic and Biodynamic practices since he first started farming in the Willamette Valley.

Doug Ackerman, owner of Armstrong Vineyard and co-owner of Red Electric Wines, was seduced years ago by the wines from Ribbon Ridge. “The wines have both a natural depth of flavor with abundant lavender, black raspberry and violets, as well as an exotic nature with lifted aromatics of fresh strawberry and Asian spices (notably from Brick House, Ayres and Beaux Frères).”

Ackerman adds, “We continued to be inspired by our fantastic winemaking neighbors who show the world the potential of our region, particularly in those vineyards that are farmed organically and/or Biodynamically.” In 2013, Ackerman converted the Armstrong Vineyard to total organic farming methods. Taking a holistic approach, with an emphasis on vineyard health, creates balance between vines and cover crop, and develops a diverse soil microflora critical for vine health, the complexity of grapes and, overall, the well-being of the land.

Peterson-Nedry humbly acknowledges the area’s success: “None of us planted our grape dreams onto Ribbon Ridge thinking of creating an AVA. We all were looking for the ‘right place’ to grow Pinot Noir, looking for that something special that would make unique wines.  Of course, we all wanted to make THE best Pinot in the Valley, but most of us were naive and foolish, or damn lucky.”

After significant growth, the initially fluid winegrowers group has continued to foster communications and, recently, more tightly called for full voluntary adherence to the Ribbon Ridge Statement of Principles, giving hope they’ll someday meet Tunnell’s challenge of being a 100% organic, Biodynamic and LIVE-certified AVA. Fortunately, there is a singlemindedness on these critical concerns with few outliers.

Ribbon Ridge may be tiny, but its members have big plans.

Home Videos The WORLD of WINE – Wine News. Cheap wine, tasting notes and cooking with wine The World of Wine – May 2021 … END_OF_DOCUMENT_TOKEN_TO_BE_REPLACED

How to visit Napa Valley on a Budget. In this video Carson and I explain a few ways to enjoy Napa on the cheap. Tip and advice about how to visit Napa … END_OF_DOCUMENT_TOKEN_TO_BE_REPLACED

Home Videos Get To Know Argentina Wine | Wine Folly If you love Malbec, Argentina is your ultimate wine region. But that’s not … END_OF_DOCUMENT_TOKEN_TO_BE_REPLACED