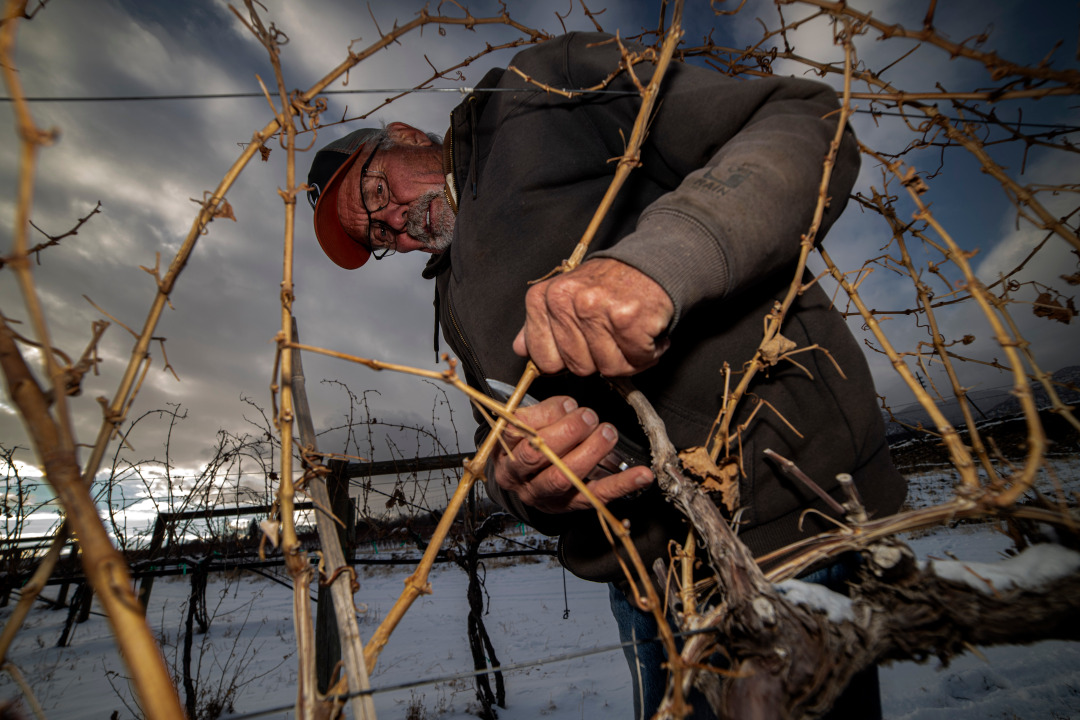 The grape vines lined up in rows throughout the Grand and North Fork valleys look promising for a 2021 vintage with their usual winter-brown foliage bunched neatly on trellises.

But cut into a bud, or scrape a stalk, and there are hints of the underlying damage done by a severe late-October freeze. An estimated 70% to 100% of the grapes in Colorado’s prime wine-growing areas have been zapped by cold this year.

The damage is bad enough that Gov. Jared Polis and Colorado Commissioner of Agriculture Kate Greenberg earlier this month asked for a federal disaster declaration for the Western Slope counties of Mesa, Delta and Montrose that were affected by the freeze. If it is granted, growers will be able to apply for emergency loans.

The grape-killing freeze added a bit of rotten luck on top of a rough spell for growers and vintners.

This is the second vineyard-damaging freeze in just over a year. In October 2019, temperatures plummeted twice, but there was less damage to grapes then because those freezes followed a number of lesser temperature drops. That allowed the vines to develop some cold hardiness. This year, temperatures were higher than average leading up to the sudden plunge, so the vines did not develop the same defense.

The 2020 freeze — what Colorado Wine Development Board Executive Director Doug Caskey calls “the kick in the butt”– was just one part of a year of other wine industry hits.  The pandemic forced the cancellation of wine festivals. Restaurant wine sales dropped off. Visitation at tasting rooms dwindled. And wildfires threatened grapes with a taste-altering effect called smoke taint. (Lab tests will soon confirm if vineyards dodged that bullet.)

“This year doesn’t look so good,” said Lee Bradley, the owner of Black Bridge Winery near Paonia. “Some of us are asking, ‘What the heck are we going to do?’”

Search for signs of damage

What most of the grape growers have to do for now is wait. The extent of the damage isn’t certain yet, said Horst Caspari, a viticulturist with the Colorado State University Western Colorado Research Center.

Caspari, who has been growing, studying and turning Grand Valley grapes into wine for more than 20 years, has been out in the valley’s vineyards in recent weeks cutting into buds to search for signs of damage. He and his helpers have examined more than 22,000 buds on more than 38 varieties of grapes at more than 50 vineyard sites.

What they have found is that the extreme freeze event when the temperatures dropped to 14 degrees on Oct. 26 and to 9 degrees on the 27th caused significant damage that is just beginning to show itself.

Late-maturing varieties of grapes like cabernet sauvignon, merlot, barbera and petit verdot got hit badly. Some of the more cold-hearty hybrids with lesser known names like Marquette, cabernet dorsa and Zweigelt did better. But even those suffered some damage.

Statewide, Caspari anticipates the vitus vinifera  —the European grape varieties — crop-loss average to be around 80%. He said he believes the North Fork Valley will take an even bigger hit than the Grand Valley. The only Colorado wine-growing region to escape the damage was in the McElmo Canyon area near Cortez.

Knowing that the damage is lurking in the vines and having a disaster declaration pending hasn’t given growers and vintners a clear path forward for the year. In a Zoom session with growers last week, Caspari told them they may have to wait several months to determine if there is anything salvageable in the vineyards.

“If you have a small vineyard, don’t do anything. Wait until spring to see if the trunks split. Wait until bud break and then respond to it,” he said, referring to the time when vines break from dormancy.

That response will include anything from forgoing pruning to whacking vines off back to the ground, or to ripping out plants that have no life left, even in the roots.

That might sound drastic for fans of Colorado wine, but Caskey said 2021 won’t be a dry year.

“I don’t think we are talking a scarcity,” Caskey said. “From a consumer perspective, it’s not like Colorado wine is going to disappear. I think there will still be a reasonable amount of wine out there.”

That is because 2017 through 2019 were bountiful years for Colorado vineyards. Those vintages will still be available. There is also frozen grape juice from those years that can be used to produce wines in the coming year.

Bruce Talbott, who supplies more than two dozen wineries with grapes from Talbott Farms Inc. vineyards, said he still has 40 to 50 tons of juice and must (juice containing the grape skins and stems) sitting in freezers that can be used to augment 2021 wines.

More hybrid grapes on the horizon

Beyond throwing up big challenges for wine production in the coming year, this second-in-a-row major freeze event has some growers considering a change.

Caspari has been pushing growers for years to plant more cold-hardy hybrid grape varieties, but many were resistant because the varieties aren’t recognizable by consumers and aren’t in demand from vintners who buy grapes.

That is beginning to change.

Ten years ago, only 1% of Colorado wine grapes were hybrids. That has jumped to about 15% currently. The most recent freeze damage is expected to hike that even higher.

Caskey said he believes the hybrids make wine that is just as good as the more recognizable grapes like merlot and cabernet sauvignon.

BookCliff Vineyards co-owner John Garlich said he is among those who have resisted planting the hybrids, but if he has to rip out a block of vines because the latest freeze killed them, he will consider replacing them with a cold-hearty grape like chambourcin.

Garlich and his wife, Ulla Merz, have been growing grapes and making wine for 24 years and selling it at their Palisade and Boulder tasting rooms. He said this is definitely the “worst scenario” they have encountered yet — with pandemic effects on top of a killing freeze.

“But this is farming. You can’t get too emotionally wound up about it,” he said. “Rest assured that we will try to keep our customers supplied. We think we can do that. Before this, the past couple of years have been very good to us.”

Home Videos The WORLD of WINE – Wine News. Cheap wine, tasting notes and cooking with wine The World of Wine – May 2021 … END_OF_DOCUMENT_TOKEN_TO_BE_REPLACED

How to visit Napa Valley on a Budget. In this video Carson and I explain a few ways to enjoy Napa on the cheap. Tip and advice about how to visit Napa … END_OF_DOCUMENT_TOKEN_TO_BE_REPLACED

Home Videos Get To Know Argentina Wine | Wine Folly If you love Malbec, Argentina is your ultimate wine region. But that’s not … END_OF_DOCUMENT_TOKEN_TO_BE_REPLACED