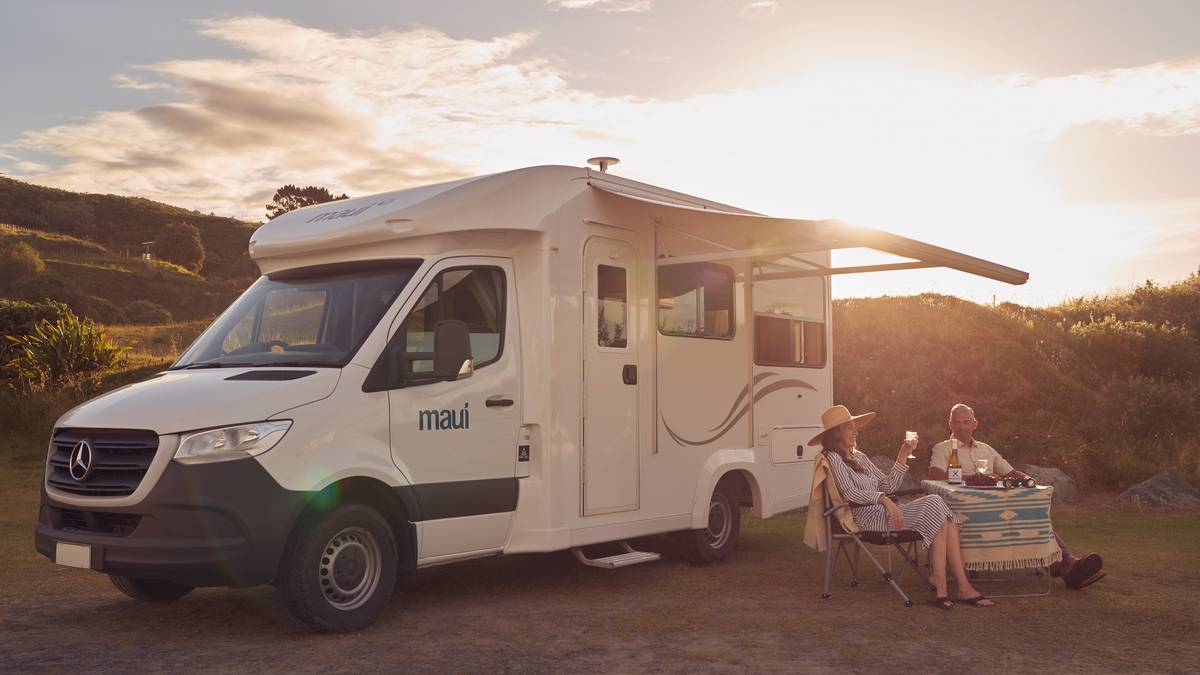 A motorhome is a great way to mix wining with driving – as long as you’re parked up for the night. Photo / Destination Wairarapa

There’s some “funky stuff” growing inside some of Lance Redgwell’s wine barrels and he’s absolutely thrilled about it.

Another of the barrels in his Wairarapa winery is made of tōtara. It’s large enough to drive a Mini into and as far as Lance knows, is the only native timber being used to age wine.

Lance is part mad-scientist, with painted toenails, using his Cambridge Road winery to push back against mass wine production, and part renowned vintner in a linen shirt using eco-farming principles to make some of the most interesting wines in the region.

As he takes us through a tasting of his natural orange wines, bubbles, rosé and red blend, he details his philosophy on organic winemaking and why it’s the little guys who are throwing caution to the wind and making the interesting stuff.

“I look at some of the big wineries and it’s mechanical as f*** and as a passionate vineyard guy, I go what the f*** – it’s all so repetitive. It’s a desert of grapevines and it would do my head in if you’re the poor guy sitting in the tractor every day.”

Redgwell landed in Martinborough after travelling the world making wine and stayed because of its charm. He loves the “intimacy and pedestrian nature” of having so many different wine pockets and winemakers all within a stone’s throw.

He knows every family along Cambridge Rd which is home to at least five different wineries and credits his neighbour with making arguably the best Syrah in Australasia.

“In my mind, Martinborough takes the prize of cutest wine village in New Zealand.”

Cambridge Road is one of the stops on our three-day campervan trip along the Classic Wine Trail which stretches from Marlborough in the South Island up through the Wairarapa and into the Hawke’s Bay.

Traditionally, and legally, wine doesn’t mix well with driving – which means taking a hotel on four wheels is a good hack to combine both.

We pick up our noble three-berthed steed in Lower Hutt and are soon winding our way up through the Remutakas, takeaway flat whites in reusable cups nestled in the cup holders. Before I’ve even worked out how to operate the sat nav, we get to Featherston where we first learn a Maui Venturer Plus is a bit of a pig to park.

At 7m long, the campervan’s rear-end hangs over the back of standard carparks and its parking camera points directly down at the back bumper giving it no context to the wider parking hazards making it a challenge to tuck in anywhere.

Fortunately, Wellingtonians weren’t rushing to the Wairarapa first thing on a dreary Friday morning, which leaves plenty of room on the side roads so we can get out and explore New Zealand’s only “Booktown” and its seven bookshops.

We pop our heads into a few but are a bit distracted at the thought of Featherston’s crown jewel, C’est Cheese, which specialises in local cheeses such as cumin-flecked Gouda and French-style blues as well as other picnic basket essentials like olive oils, dips and chutneys.

With grand plans to make a cheese-board later to go with a bottle of wine we’ll inevitably soon be picking up (and also excited to make use of our mobile fridge) the chilli-Havarti sounds too delicious not to buy.

Eager to continue on the wine trail, we jump back in our hotel on wheels and head on through the open fields of Wairarapa to Martinborough – the hotbed and hub of the region’s winemaking – and stop in at the oldest commercial olive grove in the region, Olivo.

Turning into its gravel driveway and down through its vast grove of twisted olive trees, you’d be forgiven for thinking you’d travelled through a wormhole and somehow ended up in Tuscany.

Generous parking spaces are next to a large vegetable garden complete with a dovecote. Owner Helen started with two doves but they “breed like rabbits” and now she has so many that rogue pigeons often try to sneak in and hide among the doves.

But she manages this with another hobby – shooting pigeons – in between making award-wining olive oil.

Like Cambridge Road winery, just up the road, Olivo experiments with an old art, except its medium is olive oil rather than wine.

Helen patiently explains the differences between the different varieties and politics of olive oil grades (extra virgin is the best and “pure oil” is a branding tactic) before walking us through a tasting of their numerous varieties.

We start with the classics – extra virgin, lemon-infused, and chilli – before moving on to her more experimental flavours such as porcini, for an umami hit, fennel and orange.

For dessert, there’s a vanilla blend which is almost like a light syrup, which would complement both savoury and sweet dishes.

As if the nine different varietals weren’t enough of an adventure through the potential of olive oil, Helen also mentions she’s eyeing up the bay tree in her expansive vegetable garden and is currently experimenting with a new blend.

Well-oiled, it’s time to hang up the car keys so we can responsibly sample what Martinborough is renowned for and head to the Top 10 Holiday Park just outside the small town centre to park up for the night.

We are told the best way to tour Martinborough is on two wheels, but the bikes for hire need to be back by 6pm. Instead, we instead opt to walk the 15 minutes to Cambridge Road to avoid having to clock-watch. This turns out to be a clever move because of the generous samples and decent chat with Redgwell about his wine barrels.

With the town configured to a Union Jack layout, it’s very simple to get around – even if you’ve had a few too many generous samples and need to get across the town in time for a dinner booking.

With the warmth of the sun disappearing, we opt for a large table indoors at Colombo Martinborough then quickly and greedily order a pizza each after realising how hungry we are. As we wait, Colombo comes alive.

Once a month, a group of retirees gets together at the winery to catch up over a beverage and a large platter of nibbles.

“Sorry about the noise,” says a woman who breaks away from the group to chat to us youngsters in the corner.

“The men are all ex-farmers so they’ve all lost their hearing because it was before we knew about hearing damage and earmuffs.”

Their gathering adds to the ambience and charm of Colombo as we scoff easily the most delicious woodfired pizzas I’ve ever eaten in New Zealand, with chewy crusts and classic Italian toppings.

While the boomers kick on, tossing their heads back with laughter and hopping between conversations, we millennials start yawning and opt to take away the last few uneaten slices of pizza for a snack the next day. We walk back to our home on wheels as the last of the light disappears.

We convert the campervan’s lounge into a bedroom, pop on the kettle and break out some chocolate.

After a quick run through the quiet vines the next morning, we coil up the power lead, batten the hatches and head back on the wine trail up to Greytown. Although it’s quite early, its cafes and boutique shops are bustling, and thankfully there’s generous parking on the back streets for our 7m hotel room so we can duck into Schoc Chocolates.

We head on up through Carterton and stop for lunch at the cute Clareville Bakery for a pretty brunch and their signature “Mikecronut”, which is a petite version of the famous cronut and named after the cafe’s head baker and owner, Michael Kloeg.

In Masterton, we get a dose of culture at the Wairarapa Museum of Art & History, which regularly hosts various exhibitions. When we visit, it’s home to a show of art done by local art teachers.

Ten minutes up the road we stop in at Le Gra and are greeted first of all by Tiger. “He’s turning into a bit of a schmoozer,” owner Brian says as the schnauzer rests his head on my knee.

“When people turn into the driveway there are bells that ring in the house so he comes running down the drive to meet them and he scavenges for pats and crumbs.”

Brian’s wife Nicky brings out a platter of garlic and chilli prawns, smoked salmon pate, local cheeses, homemade crackers and chutneys. The couple took over the small single vineyard about 18 months ago with not much prior experience so have been through quite a steep learning curve, especially with Covid-19.

“So the stress levels were through the roof trying to get your first harvest through with all of the complications,” Brian says.

Nicky says they managed through thanks to their neighbours and the local Wairarapa winemaking community who came together to help them get through the harvest.

They now also have a park-over option for motorhomes so holidaymakers can wake up with a view of the vines.

While we are mid-conversation, another motorhome rolls down the gravel driveway and is met by a bounding Tiger eager to schmooze for a few more pats.

For more New Zealand travel ideas and inspiration, go to newfinder.co.nz and newzealand.com

Home Videos The WORLD of WINE – Wine News. Cheap wine, tasting notes and cooking with wine The World of Wine – May 2021 … END_OF_DOCUMENT_TOKEN_TO_BE_REPLACED

How to visit Napa Valley on a Budget. In this video Carson and I explain a few ways to enjoy Napa on the cheap. Tip and advice about how to visit Napa … END_OF_DOCUMENT_TOKEN_TO_BE_REPLACED

Home Videos Get To Know Argentina Wine | Wine Folly If you love Malbec, Argentina is your ultimate wine region. But that’s not … END_OF_DOCUMENT_TOKEN_TO_BE_REPLACED