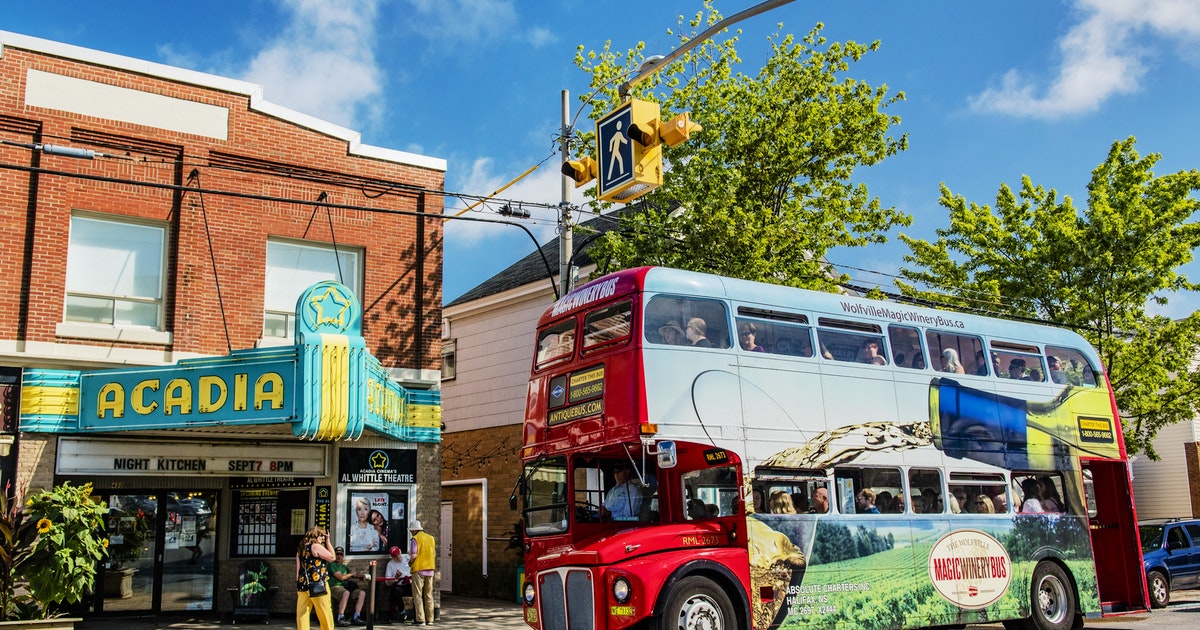 Like many entrepreneurs dealing with the pandemic, David Hovell likes to remain optimistic and see the glass as half full.

Although Nova Scotia is again under lockdown due to a surge in COVID-19 cases, the Magic Winery Bus Ltd. owner and operator said his company will begin its 10th winery tour season on June 24.

He’s hopeful case numbers will have settled by then and conversations about the Atlantic travel bubble will resume.

“Having the Atlantic Bubble restored is very important to our business,” Hovell said. “This season, if it’s only Nova Scotians who are travelling around Nova Scotia, that does have an impact on us.”

Hovell said they are seeing more people on board who genuinely want to learn about and experience Nova Scotia wine.

“After a day with us, they go home knowing a little more about the extraordinary things that are happening in Nova Scotia wine country,” Hovell said.

He hopes to offer visitors two different experiences, one with the traditional British double-decker bus and the other with the Tidal Bay Express, which was launched last year.

Although late getting started in 2020 due to the pandemic, Hovell said he considers last year’s Magic Winery tour season in the Annapolis Valley a success.

“When I look back a year ago, there was a whole lot of uncertainty whether or not we could even put an experience on the road,” he said.

It wasn’t until the Atlantic Bubble was established in July that he knew the tour would be able to run. There were several public health guidelines to address and he recognized capacities at Wolfville-area wineries would be greatly reduced. Instead of taking 150 visitors per day on tour, they were only able to offer the experience to 60.

The company brought a modern 56-passenger coach into service and launched the Tidal Bay Express Tour, carrying only 20 guests per departure. Plexiglass barriers were installed around the seats and all the guests onboard wore masks and were socially distanced. The bus was loaded from back to front and unloaded from front to back to avoid contact.

Although they traditionally would have been on the road the Victoria Day weekend in May, the season didn’t begin until Aug. 13. Hovell said they ran on Thursdays, Fridays, Saturdays and Sundays with three departure groups. They were able to add a few weeks to the end of the season, running tours until the end of October.

“In order for things to work last year, there had to be predictability,” Hovell said. “Wineries had to know who was coming and how many were coming.”

One new feature was offering guests small culinary plates prepared by winery chefs paired with curated wine tastings. Four area wineries were visited in sequential order, as will again be the case in 2021.

Return of the double-decker

Hovell said one of the changes the company had to make in the 2020 season was moving guests sequentially. In the past, with the British double-decker bus, guests had the flexibility to decide the order in which they visited the wineries and for how long with a hop-on-hop-off format.

The British double-decker remained parked in 2020, but Hovell said that having learned from last year’s experiences, it would be back on the road in 2021 in addition to the Tidal Bay Express.

“People love the British double-decker bus, there’s just something about the romance of the bus that people enjoy,” he said.

Some customers come back year after year to enjoy a Magic Winery Bus tour and for many, it’s because of the double-decker.

“Where else in North America can you travel around rural country roads looking at the beautiful farmland and the landscape and the wineries and be 14-and-a-half feet off the ground?” Hovell said.

This year, the season will run from June 24 to Oct. 31. The booking portal opened recently and Hovell said it’s been brisk.

There’s no doubt that Magic Winery Bus tours have become a major tourism draw for the Wolfville area and have a significant impact on the local economy.

Hovell said they take a tremendous amount of pride in the fact that they’ve created something that they and many other businesses, particularly the wineries, benefit from. He said the Magic Winery Bus is, figuratively, the vehicle that gets visitors here. Once they’re here, visitors add other stops to their itineraries to round out vacation experiences.

Hovell said they have been conducting an extensive survey of guests since 2014. This initiative is managed by Dr. Donna Sears of Acadia University’s Faculty of Business, who has expertise in wine tourism.

In 2018, the total economic impact of the Magic Winery Bus was approximately $3 million. About one-third of this directly benefited the five wineries involved. Hovell points out that this was at a year when they welcomed approximately 10,000 guests.

The survey was conducted again in 2019 but the sample size was too low to extrapolate any strong statistical conclusions. In 2020, when there were only 2,000 guests, the economic impact was approximately $750,000.

On average, in 2020, guests purchased six bottles of wine. Hovell said guests receive a commemorative, branded six-bottle wine bag while on tour to fill if they so wish. With the coach bus, guests are also able to purchase cases of wine that can be safely and securely stowed in the luggage compartment until the tour is over.

Following visits to Canada’s other wine regions, the company began offering tours in Ontario’s Niagara wine region’s Twenty Valley in 2018. They ran again in 2019 and were poised to expand into Niagara-on-the-Lake in 2020 before the pandemic hit.

“We’ve created a business model that really has the potential to be successful in many other wine regions across the country,” Hovell said.

Unfortunately, due to the level of risk involved and travel restrictions, the Ontario tour bus remained parked in 2020 and operations will remain paused in 2021.

Home Videos The WORLD of WINE – Wine News. Cheap wine, tasting notes and cooking with wine The World of Wine – May 2021 … END_OF_DOCUMENT_TOKEN_TO_BE_REPLACED

How to visit Napa Valley on a Budget. In this video Carson and I explain a few ways to enjoy Napa on the cheap. Tip and advice about how to visit Napa … END_OF_DOCUMENT_TOKEN_TO_BE_REPLACED

Home Videos Get To Know Argentina Wine | Wine Folly If you love Malbec, Argentina is your ultimate wine region. But that’s not … END_OF_DOCUMENT_TOKEN_TO_BE_REPLACED