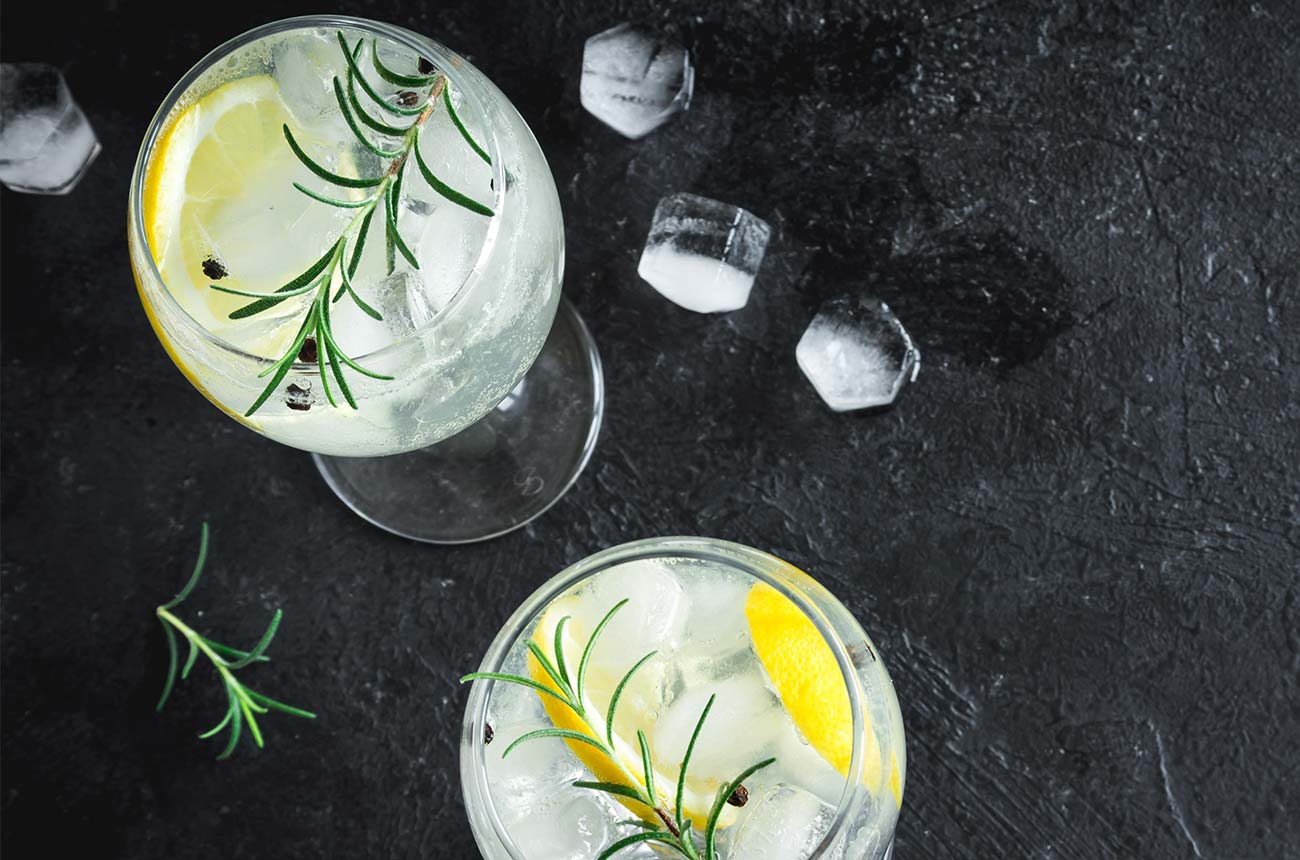 Gin from Europe?’ you might be thinking. ‘Is nothing sacred?’ After all, gin is as proudly British as fish and chips, Tesco and Fray Bentons meat pies. This is correct – but only in so far as none of the above are strictly British inventions, either. The first chippie was set up by a Jewish immigrant, the first Tesco was established by the son of Polish arrivals, and Fray Bentos was first manufactured in Uruguay.

As for gin, well, gin began in Holland, with medieval monks who flavoured distillates with juniper for medicinal purposes. Dutch distilleries continued this practice in the 17th century, and their genever (Dutch for juniper) was mostly used for medicinal reasons; though British soldiers fighting in the Eighty Years’ War reputedly found it useful for relieving pre-battle nerves, hence the term ‘Dutch courage’. Before long, it was well established in Britain – a proudly Protestant spirit that had the backing of the country’s rulers over untrustworthy Catholic brandies. At least, it did until they realised that swathes of the country were happily drinking themselves insensible on a daily basis. This ultimately led to greater regulation for gin production.

Sweeter ‘Old Tom’ style gins were popular, probably because the sugar helped to mask some of the more undesirable characteristics in the spirit. The (unsweetened) London Dry style was already established by the likes of Alexander Gordon (Gordon’s) and Plymouth’s Black Friars Distillery (now Plymouth Gin) in the 18th century.

London Dry received a major boost with the invention in the 1830s of the Coffey still (an efficient, two-column vertical design that can be operated continuously). Suddenly, it was a lot easier to make gin that was elegant, refined, and better showcased the botanicals that were part of the drink.

By 1870, the likes of Tanqueray and Beefeater were established, and things ticked along happily until 2008, when newcomer Sipsmith wanted to set up its distillery. Its 300-litre still, however, was too small; the minimum size permitted was 1,800 litres – a measure introduced almost 200 years previously to prevent people distilling small batches of moonshine at home.

This was sensibly deemed less of a problem in 21st-century Britain, so the law was changed, and the floodgates opened for small-batch gin production.

The resulting British ginaissance has spread worldwide, and particularly across Europe. Spain might have had its ‘gintonica’ fashion for years (huge balloon glasses with massive free-poured measures of spirit and minimal tonic), but consumption – and production – has skyrocketed in other countries, too.

The thing about gin is that it can have regional expression. It’s glib to call it terroir, but some versions do have a strong local accent. Spanish and Italian distilleries, for instance, use a lot of fresh citrus fruits as botanicals, while their French counterparts are elegant and correct. Scandinavians seem more interested in texture, mouthfeel and botanicals such as native plants and grasses.

It all makes for a fascinating category, with a wide array of styles and extraordinary energy. Pick up three or four of the gins mentioned here and try them against each other in multiple classic gin cocktails. We might not be able to travel at the moment, but at least our palates can still go on a juniper-led voyage of discovery.

Inspired by the founding family’s Indonesian-born grandfather, Bobby’s has an elegant sweet-spice nose, with grains of paradise and pink pepper. It’s quite Christmassy at first, with cinnamon and candied fruit but dries out nicely on the finish. It’s highly distinctive, but also surprisingly versatile. Good in a G&T, but works particularly well in a Negroni. Alc 42%

As you’d expect for the price tag, this is a classily packaged and beautifully made gin. But it’s not necessarily for everyone. There’s a short kick of juniper up front but it moves rapidly into layers of sweeter, fruitier, more perfumed flavours. It’s a cushiony hug, rather than a brisk juniper handshake. Distinctive and really smooth; you’d never know it was 47.6% abv. Well made. A good Martini gin if you like the profile, or in a Negroni for people who don’t like them too dry and bitter. Alc 47.6%

Created by a ‘pharmacist entrepreneur’ in 2013, Copperhead is absolutely on point. It’s a classical style of gin, so should appeal to lovers of Tanqueray or No3, but its aromas are perfectly in focus. Bright, brisk juniper leads into taut citrus and pricks of coriander spice before tailing into a gentle savoury earthiness on the finish. Very classy. Great G&T gin, though it will work in anything, frankly. Alc 40%

Produced by the Cognac house Maison Ferrand, it’s no surprise that this is a beautifully crafted gin. It’s not showy – grassy and herbal with that characteristic juniper pine aroma on the nose – but it’s wonderfully clean and elegant on the palate, where layers of grasses and juniper intertwine and merge over a drier, earthier base, before giving way to a sweet citrus finish. Versatile, too. Works in any gin cocktail or as a G&T. Alc 44%

This gin tastes very much of its French Riviera home – not least because it’s expensive! The feel of the bottle owes more to a top-end perfume than a bottle of booze, and there’s some of that in the flavours, too. There’s definite juniper up front, but then many layers below and behind it. Warm red leather, higher grass elements, sweet and dry spices and building notes of musky white flowers. It wraps itself around the bitterness of tonic but is at its best in a highly distinctive Martini. Alc 44%

If the Comte de Grasse is out of your price range, you can still capture the feel of southern France in this well-priced Provence gin. As pale pink as the region’s famed rosé, there’s a dry ‘countryside in the heat’ feel to it, with flavours of peppercorns and thyme. It’s great with tonic, where there’s enough punch that the spirit is distinctly gin, but also a gentle sweetly aromatic finish. Summery. Alc 40%

Plenty of reasons to buy this German take on London Dry – not least the fact that it’s environmentally and socially sustainable and 15% of profits go to elephant conservation charities. African botanicals combine to create a gin that’s dry and junipery, with sweet-spice sparkles on the finish. Makes a good dry G&T. Alc 45%

Nothing shy about this gin from the Black Forest. Monkey barges into your glass with all the decorum of a troupe of chimpanzees. It’s a fruited, complex, layered gin, with black, bright berries, a hint of liquorice and spiced herbs and grasses. Though there’s a lot happening here, it’s brilliantly balanced, and works in every format I’ve tried it in, from a G&T to a Martinez to a Negroni. Alc 47%

Maybe it’s the greyhound on the label, but there’s a definite sleekness to Windspiel – perhaps down to the fact that its base spirit is made with potatoes. It’s super elegant: lots of juniper, citrus, candied lemon peel and a gentle hint of lavender on the finish, no sharp edges. The charm is its smooth, rich texture, made for an indulgent Martinez or (better) a quality Martini. Alc 47%

You can usually rely on the Italians for a bit of pizzazz in their packaging, and Ginato has a brilliant ’70s retro coolness to it. Flavour-wise, it’s pretty standard – a juniper hit with some candied tangerine peel. But, made with Pinot Grigio grapes, there’s an underlying sweetness to the palate that makes for a good summery G&T. Alc 43%

Pretty is the word that springs to mind when you first nose VII Hills. It’s high toned and light footed – all citrus and white flowers, like playing the top two octaves of a piano. With tonic, this floral note becomes more pronounced, and the gin shows at its best in a Negroni, which brings out the citrus to create a classic, elegant cocktail. Alc 43%

There are all the gin elements a traditionalist would want – but seen through a Scandinavian filter. It’s like rolling a lemon in your hands in a cool pine forest. That vibrant pine element becomes sweeter and more heathery on the palate, with a high note of coriander dying away slowly on the finish. It’s elegant, highly drinkable, different and yet still respectful. Good as a Martini or a G&T. Organic. Alc 40.5%

You have to be brave to oak-age gin, but this tiny distillery on the island of Hven between Sweden and Denmark has pulled it off well. A light and wheaty gin, with a touch of sweet spice, the oak acts almost as a binding agent on which the other elements sit shyly. It’s textural rather than aromatic, but very smooth with a dry finish. Good Martini gin. Alc 40%

Dreamed up by a group of Finnish friends in a sauna, Kyrö is unusual in that its base spirit is made using Finnish rye. It has an attractive sweet grass character which moves into sweet fruit before juniper steams in, dragging a spicy train behind it on the finish. Big attack, big cymbal clash, then it’s gone. For me it’s brilliant in a Martinez, where it’s the first and last thing you taste, with the sweet vermouth and Maraschino holding the mid-palate. Alc 46.3%

Most Spanish and Italian gins go down the citrus route, but not Gin Mare. This is savoury rather than sweet – think olives and garrigue, particularly rosemary and thyme – with a touch of sea-breeze saltiness and a twist of lemon. It’s sweeter and softer on the palate than you’d expect, so although it works fine in a G&T, it’s at its best in a Martini, where it can show off its subtlety and silkiness. Alc 42.7%

The blue and white ceramic bottle tells you all about this drink’s Mallorcan heritage, and the flavours, too, are quintessentially Mediterranean. Lots of orange and juniper with a touch of leafiness, it’s oily rather than sweet-fruited, and the finish is dry. OK in a hot-weather G&T, but quite superb in a Negroni, where the orange note really hits it off with the other ingredients. You don’t even need the garnish! Alc 46.6%

Best gins for a Negroni

Best gins for a Martini

Home Videos The WORLD of WINE – Wine News. Cheap wine, tasting notes and cooking with wine The World of Wine – May 2021 … END_OF_DOCUMENT_TOKEN_TO_BE_REPLACED

How to visit Napa Valley on a Budget. In this video Carson and I explain a few ways to enjoy Napa on the cheap. Tip and advice about how to visit Napa … END_OF_DOCUMENT_TOKEN_TO_BE_REPLACED

Home Videos Get To Know Argentina Wine | Wine Folly If you love Malbec, Argentina is your ultimate wine region. But that’s not … END_OF_DOCUMENT_TOKEN_TO_BE_REPLACED