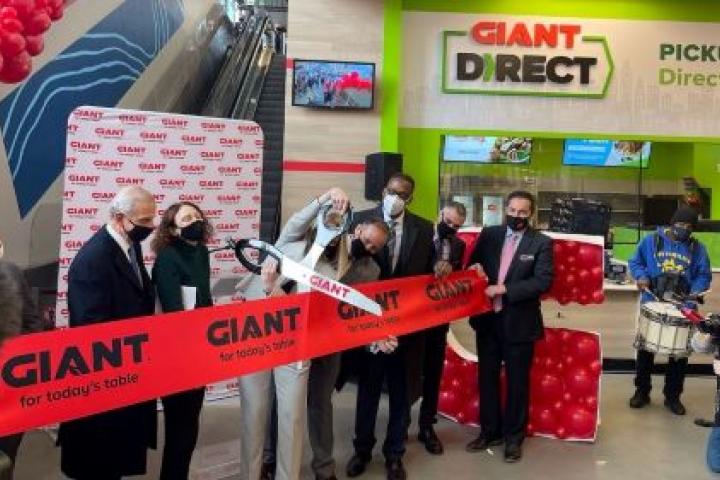 The new Giant has a grand entrance with a Starbucks cafe on the right and escalators on the left.

The Giant Co. has unveiled a stunning new format today in Philadelphia featuring everything on the wish list of every urban grocery shopper.

The two-level store, located at 60 N. 23rd St., is the company’s latest to open in the city, and the modern features are almost too many to mention. Some include a food hall, a kombucha tap, a VIP elevator for apartment dwellers, a parking garage with curbside pickup spots and electric vehicle charging, in-house smoked meats, a dairy department dedicated to plant-based dairy, dry-aged steakhouse quality meats, local foods spanning every category, natural beauty products, a smoothie bar, a brewpub, organic wines, and an express lane for shoppers using mobile pay.

“Philadelphia’s grocery scene is experiencing a major renaissance and The GIANT Company has been at the forefront, introducing new formats, opening new stores, and expanding grocery delivery services. Our Riverwalk store celebrates this transformation, offering an elevated omnichannel grocery experience unlike anything Philadelphia has ever seen,” said Nicholas Bertram, president, the Giant Co. “Expertly designed to meet the needs of urban dwellers, our Riverwalk store is the perfect blend of modern sophistication and surprise, and of course, pays homage to the city’s fantastic food scene. We can’t wait for opening day and to finally let the community discover what we’ve created for them – a one stop destination for all things food.”

The new Giant has 21 checkouts (self and full service), as well as a mobile pay lane.

A Store Uniquely Designed for Philadelphians

First announced in 2019 as a centerpiece of the Logan Square neighborhood’s new Riverwalk mixed-use development project, the 65,000 square foot store is located on the 2nd floor of a 25-floor residential tower. The Giant Co. chose Chute Gerdeman, an award-winning retail design and branding firm based in Columbus, Ohio, to work on the design. Riverwalk incorporates design elements inspired by the company’s heritage as well as its Giant Heirloom Market format, with wood elements, and its signature colors, red and black.

To make it easier for customers and team members to shop and work, the new store offers a ground level parking garage with direct access to the store’s lobby. Upon entering the lobby, which is accented by the work of local artists, a full-size Starbucks awaits, as does a GIANT Direct pickup station for orders placed online, offering added convenience for on-the-go families.

Customers will utilize an elevator, escalator, or stairs to reach the full store on the second floor; a dedicated cartalator safely transports shopping carts between levels. Residents of the living space above the store have exclusive access to a private elevator, bringing them directly from their apartment to the second level sales floor.

Taco lovers will love the locally branded taqueria in the food hall.

Food Hall: A New Place to Enjoy and Relax

The store features a food hall with a focus on fresh, with eats from Mission Taqueria, a local favorite for creative, high-quality Mexican cuisine; soup and salads from locally based Saladworks; responsibly sourced, premium sushi from Hissho Sushi, plus made-to-order sandwiches, flatbread pizzas, smoked meats, hot foods and gelato.

Rich in natural light, thanks to its floor to ceiling windows, the Food Hall offers a spacious area to safely enjoy a meal overlooking the Schuylkill River, 30th Street Station, and the riverside bike path. In addition, customers can also enjoy food and drink from the food hall and store on a picturesque terrace, complete with lounge-style furniture and fire pits.

“Our new brand platform, For Today’s Table, is all about encouraging families to connect over a meal; it’s what we stand for and guides all that we do,” Bertram added. “Our Riverwalk store brings For Today’s Table to life in a way that until now, we have only dreamed about. It’s the sum of the team’s very best work and is a tangible symbol of The Giant Company’s continued focus on omnichannel growth, innovation and above all else, families and community.”

The produce department features locally sourced fruit and veg and a butcher for both.

The produce department offers items fresh from many from local farms. In fact, the store has localization built-in seemingly everywhere, from local coffees in the coffee aisle to local bagels in the bread aisle to local wines in the wine aisle.

In response to the growing demand for meat-free alternatives, the Riverwalk store also features the company’s largest plant-based section to date. Customers will find meat and fish substitutes including Impossible and Beyond products, vegan cheeses, ice creams and other desserts. Shoppers will also find a four-door cooler case just for plant-based dairy products.

A full-service meat and seafood department includes a newly introduced aged beef program with steakhouse quality cuts, such as bone-in rib eyes and strips, aged in-house for up to 42 days. The store will also offer a wide range of fresh, sustainably sourced seafood, including fish, lobster and shellfish.

The Riverwalk location also includes a large cheese section, offering a wide assortment of domestic and imported cheeses plus selections from Philabundance’s Abundantly Good cheese label that helps support dairy farmers in the commonwealth. Customers will be able to receive food and wine pairing recommendations.

A full-service deli will offer an assortment of Boar’s Head deli meats and cheeses along with an expanded selection of prepared foods and grab and go meals. The department also includes a charcuterie station and a mozzarella station featuring cannoli and more from Spring Grove, Pa.-based Caputo Brothers Creamery.

Whether looking to sip on site or bring home, customers will enjoy Riverwalk’s robust beer and wine collection, the largest in The Giant Co.’s footprint. The section features local craft beers and imported favorites as well as Old and New World wine, prosecco and champagne. The store will also feature a Beer Garden, complete with a self-serve tap wall offering more than 40 craft beers, wines, hard seltzer, cider and kombucha on tap.

The Riverwalk store is expected to employ 220 team members.

The Riverwalk store is the company’s fifth location to open in Philadelphia, joining its Grant Avenue Giant and three Giant Heirloom Markets. These stores, along with the just announced Cottman Avenue project and the company’s Island Avenue e-commerce fulfillment center slated to open in November, bring the company’s total capex investment in the city to more than $106 million.

Ahold Delhaize USA, a division of Zaandam, Netherlands-based Ahold Delhaize, is the parent company for Ahold Delhaize’s U.S. companies, consisting of Food Lion, Giant Food, The Giant Co., Hannaford, and Stop & Shop, as well as e-grocer Peapod; Retail Business Services, a U.S. support services company providing services to the brands; and Peapod Digital Labs, its e-commerce engine. Operating more than 2,000 stores across more than 20 states, Ahold Delhaize USA is No. 11 on The PG 100, Progressive Grocer’s 2020 list of the top food and consumables retailers in the United States.

Home Videos The WORLD of WINE – Wine News. Cheap wine, tasting notes and cooking with wine The World of Wine – May 2021 … END_OF_DOCUMENT_TOKEN_TO_BE_REPLACED

How to visit Napa Valley on a Budget. In this video Carson and I explain a few ways to enjoy Napa on the cheap. Tip and advice about how to visit Napa … END_OF_DOCUMENT_TOKEN_TO_BE_REPLACED

Home Videos Get To Know Argentina Wine | Wine Folly If you love Malbec, Argentina is your ultimate wine region. But that’s not … END_OF_DOCUMENT_TOKEN_TO_BE_REPLACED