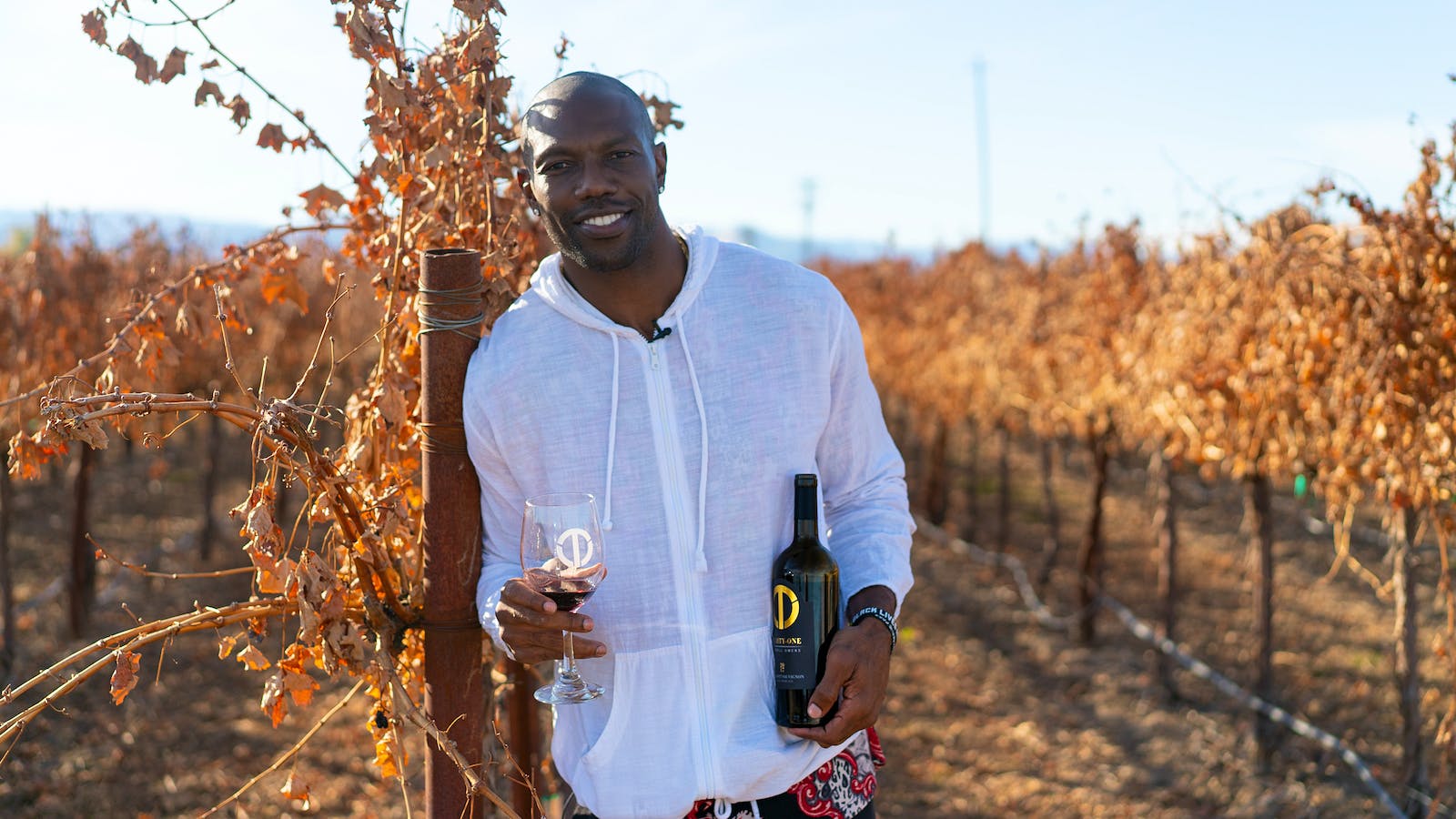 When Alabama native Terrell Owens’ NFL career started with the San Francisco 49ers in 1996, wine wasn’t in his playbook.

At one of Owens’ first team dinners, 49ers fullback William Floyd told him to try some red wine, but it wasn’t love at first sip. “It was really dry … so that’s what I always remembered of wine,” Owens told Wine Spectator. “But over the past few years I’ve tried to expand my palate.”

Owens says he stayed away from alcohol during the season, but San Francisco’s proximity to Napa Valley was bound to have an impact, and now the NFL Hall of Famer has joined a growing list of NFL veterans in the wine business. (Among those fellow NFL stars now winning at the wine game is Charles Woodson, who appeared on the Getcha Popcorn Ready with T.O. and Hatch podcast last year to talk about transitioning from the business of football to the business of wine.)

In 2016, Owens was presented with the opportunity to partner with Paso Robles–based Lasorda Family Wines, founded by baseball legend Tommy Lasorda, who passed away this past January. Over the next few years, Owens would consult with winemaker Terry Culton to create his own Paso Robles Cabernet label, called Eighty-One. There were 400 cases of the 2017 vintage made, priced at $40 a bottle.

“It’s been somewhat like my career—unexpected, and then me taking advantage of opportunity—and that’s what I did with this. It kind of describes me in a sense,” Owens laughed, “I was big. I was bold. But I definitely wasn’t dry!”

Owens says his wine project reflects not just himself but also the legacies of Lasorda and longtime friend Kobe Bryant, who were passionate about wine and had deep influences on Owens.

Last month, Owens checked in on the 2018 vintage with Culton in Paso Robles—it’s a special vintage for Owens, and he says the bottling will commemorate the year he was inducted to the NFL Hall of Fame.

“He’s been there since day one, going through the blending process with us, tasting different lots of Cabernet and playing around with adding back some Syrah into the blend,” said David Lasorda, Tommy’s nephew and managing director for Lasorda Family Wines. “I think we nailed it.”

But can Owens nail a wine pairing with popcorn? “In my opinion, the perfect match for buttered popcorn is a Chardonnay,” Owens tells us, “but I prefer to pair it with a Riesling. I think you’ll find that Eighty-One goes well with everything.”

The NBA and its athletes have passionately embraced fine wine over the past decade, but there will always be a place at the table for Cognac—and now it’s official. Hennessy has been named the Official Spirit of the NBA in a global multiyear partnership and campaign that celebrated “those who push the game forward.” Fans will also be able to celebrate with limited-edition Hennessy VS and VSOP bottles commemorating the NBA partnership.

“We are honored by the distinction as the first global spirit partner in the NBA’s history,” said Hennessy global CMO Julie Nollet in a statement. “The NBA is more than basketball, and Hennessy is more than Cognac. We represent global communities, and this partnership empowers us to support a game and culture that brings people together through entertainment and camaraderie despite the current challenges faced by fans around the world. We share the NBA’s core values of integrity, teamwork, respect and innovation, which are more powerful than ever as we work to inspire and unite people across the globe.”

Enjoy Unfiltered? The best of Unfiltered’s round-up of drinks in pop culture can now be delivered straight to your inbox every other week! Sign up now to receive the Unfiltered e-mail newsletter, featuring the latest scoop on how wine intersects with film, TV, music, sports, politics and more.

Home Videos The WORLD of WINE – Wine News. Cheap wine, tasting notes and cooking with wine The World of Wine – May 2021 … END_OF_DOCUMENT_TOKEN_TO_BE_REPLACED

How to visit Napa Valley on a Budget. In this video Carson and I explain a few ways to enjoy Napa on the cheap. Tip and advice about how to visit Napa … END_OF_DOCUMENT_TOKEN_TO_BE_REPLACED

Home Videos Get To Know Argentina Wine | Wine Folly If you love Malbec, Argentina is your ultimate wine region. But that’s not … END_OF_DOCUMENT_TOKEN_TO_BE_REPLACED