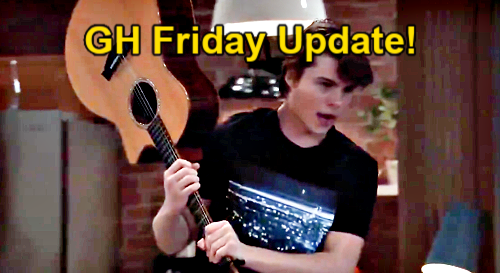 General Hospital (GH) spoilers update for Friday, February 19, teases that Brando Corbin (Johnny Wactor) will receive treatment at GH following his gunshot wound. Jason Morgan (Steve Burton) fired at Brando as Thursday’s show wrapped up, but he had some good reasons why.

Brando was freaking out about losing Cyrus Renault (Jeff Kober) trust and potentially getting killed.

Jason’s solution was shooting Brando in the thigh, so perhaps now Brando can point the finger at Jason and make it seem like he’s a true Corinthos clan enemy.

Cyrus will hopefully be convinced that Brando’s still on his side. Plus, Brando will need some recovery time, so Cyrus won’t be breathing down his neck about finding Florence Grey (Annie Abbott) while he’s in the hospital.

The only downside is Brando will have to face police questions, but he’ll handle Jordan Ashford (Briana Nicole Henry) pretty well in Friday’s episode.

Jordan won’t be happy about Brando withholding information and keeping the shooter under wraps, but Brando will insist he’s in the dark on who fired at him.

That’ll keep Jason from facing a legal battle, but there could be issues if Cyrus feels like Brando’s protecting Jason. Whatever the case, Brando will live another day and that’s great news.

Meanwhile, Portia Robinson (Brook Kerr) will enjoy drinks and some fun conversations with Curtis Ashford (Donnell Turner). Curtis will get confirmation that Portia’s having a blast on their nightclub stakeout.

This will definitely be a situation where Curtis mixes business with pleasure. Curtis’ Valentine’s Day investigation will lead to a deeper connection with Portia – and it’ll spark the idea of Curtis potentially buying a nightclub to run. It sounds like this night could set up more updates to Curtis’ life.

Other General Hospital spoilers say Cameron Webber (William Lipton) will arm himself against an intruder at the “Friz” home. After Cam grabs his guitar and prepares to use it as a weapon, he’ll call out to see who’s there.

Trina Robinson (Sydney Mikayla) and Josslyn Jacks (Eden McCoy) should eventually make their presence known, so Cameron can relax and welcome them inside.

Cameron will open up to Josslyn and Trina about his Stanford dilemma before talk turns to Franco Baldwin’s (Roger Howarth) health battle. Trina and Joss will do whatever they can to support Cam as he copes with all his family’s drama.

Next, Elizabeth Baldwin (Rebecca Herbst) will clear something up for Franco. Liz will be dressed up along with Franco for their anniversary date, but Franco will feel like he’s being tested somehow.

Elizabeth will promise that’s not the case and may apologize if Franco feels like he’s been put through a grilling session.

GH fans know Liz just wants to be supportive and stay in the loop on any symptoms Franco might be dealing with. Franco will face some rude behavior from other patrons in the restaurant he goes to with Liz.

Franco will also face some hair loss due to his cancer treatment, so his evening won’t be everything he hoped it would be. On a happier note, TJ Ashford (Tajh Bellow) and Molly Lansing-Davis (Haley Pullos) will move ahead with their commitment ceremony.

TJ will be excited about kicking off this new chapter with Molly and making their lie together a bit more official.

Kristina Corinthos-Davis (Lexi Ainsworth) will be happy everything worked out after Molly’s cheating confession. She might even apologize for urging Molly to keep quiet once upon time. Honesty was clearly the best policy, but Molly will just be glad her future with TJ is intact.

This commitment ceremony is happening at last, so Molly hold her bouquet and look forward to what’s ahead with the man she loves. While TJ and Molly get ready to commit, Willow Tait (Katelyn MacMullen) will share some sweet moments with Harrison Chase (Josh Swickard) for Valentine’s Day.

Chase will think Willow looks beautiful – and he’ll like the surprise she’s apparently cooked up, too.

Willow may suggest some dishes for Chase to try along with a specific bottle of wine. It should bring a blast from the past if Chase and Willow reminisce on their days of exploring different wine varieties. Chase will feel good about where things are headed with Willow after they have a relaxing evening together.

As for Michael Corinthos (Chad Duell), he’ll seem a bit agitated as he speaks with Sasha Gilmore (Sofia Mattsson). Michael will hint that you can’t always get back certain things you give up. Sasha might worry that giving up Michael means a reunion isn’t possible anymore.

However, Michael might be referring to something else entirely or just blowing up a bit in the heat of the moment. General Hospital spoilers say Michael will share some calmer scenes with Sasha after they visit Brando in the hospital.

It won’t be long until Michael heads back to the Quartermaine mansion with Sasha – and they’ll nearly lock lips as they reconnect.

Unfortunately, Chase and Willow will have some bad timing! As their own date wraps up, Chase will take Willow back to the Quartermaine gatehouse. That’ll put them in Sasha and Michael’s orbit briefly, so that kiss won’t pan out once Monday arrives.

In the meantime, Ava Jerome Cassadine (Maura West) will receive a present for Valentine’s Day. She’ll assume it’s from Nikolas Cassadine (Marcus Coloma) – and even Nik will mistakenly believe it’s the bracelet he bought for Ava. Too bad it’ll be a dead roach from a mystery sender instead!

Ava will be grossed out and anxious after she reads the ominous note attached to the box. This will set up Nikolas and Ava’s debate about who the sender is once Monday rolls around, but Friday should bring the initial bombshell.

Back at GH, Britt Westbourne (Kelly Thiebaud) will happily greet Brad Cooper (Parry Shen) and take her lab coat off for a chat.

Britt will get comfortable and see how Brad’s been holding up in prison. He’ll be grateful that Britt managed to score him this medical checkup and give him a breather from his cell.

Brad will sense that Britt’s bonded with Jason and most likely needle her about it. They’ll also address the serious topic of Britt’s hand tremors. Brad will feel like Britt really needs to get herself checked out, so Britt may admit that’s the plan.

Britt recently made an appointment and will seek a diagnosis at Mercy Hospital soon enough.

Of course, Britt won’t want to bring down the mood too much with any grim concerns. She may encourage a subject change, but there’ll be another unpleasant topic to dwell on. Brad will witness Lucas Jones (Matt Trudeau) looking way too cozy with Felix DuBois (Marc Anthony Samuel).

Lucas will get the wrong idea about something, so it’s possible there’ll be a Valentine’s Day misunderstanding that makes Lucas think Felix is behind a gift. Then again, Lucas might misunderstand why Brad is there and worry he’s had a health setback.

Either way, Lucas will eventually give Felix some attention and perhaps flirt a little, so Brad will be jealous and disheartened. General Hospital spoilers say Brad will fret about Lucas moving on, but maybe there’s still a chance for “Brucas” down the road.

“This isn’t a test.” #GH pic.twitter.com/vb2L1eDVQn

Home Videos The WORLD of WINE – Wine News. Cheap wine, tasting notes and cooking with wine The World of Wine – May 2021 … END_OF_DOCUMENT_TOKEN_TO_BE_REPLACED

How to visit Napa Valley on a Budget. In this video Carson and I explain a few ways to enjoy Napa on the cheap. Tip and advice about how to visit Napa … END_OF_DOCUMENT_TOKEN_TO_BE_REPLACED

Home Videos Get To Know Argentina Wine | Wine Folly If you love Malbec, Argentina is your ultimate wine region. But that’s not … END_OF_DOCUMENT_TOKEN_TO_BE_REPLACED