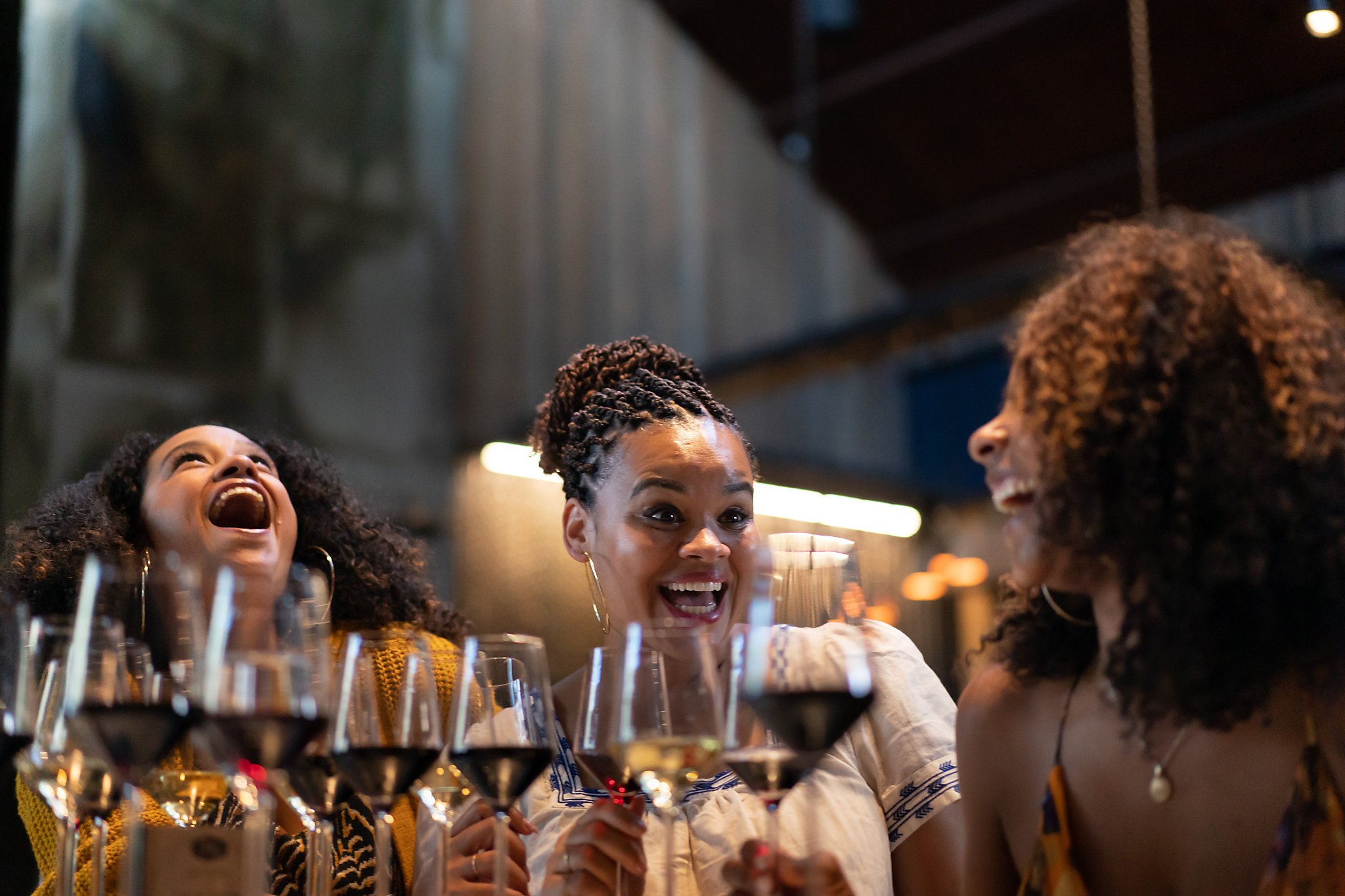 [The stories behind California wine and recommendations: Sign up for the weekly Drinking with Esther newsletter here.]

This is the portrait of the generation that’s currently 25 to 40 years old, as sketched in recent months on TikTok by their younger counterparts, Generation Z.

If you haven’t been following these generation wars that are playing out on TikTok, well, I can’t say you’re really missing out on much, apart from the fact that they will make you feel very old if you’ve been parting your hair on the side your entire life. (Guilty!) I’m a Millennial, and even though I don’t know which Harry Potter house the sorting hat would assign me to, I recognize that the kids are right to blast my cohort for some of our worst traits, like our collective love of avocado toast and our use of the term “adulting.”

But what has truly puzzled me about this #bullyMillennials movement is its fixation on Millennials’ ostensible love of wine. Despite the presence of “wine o’clock” in many a Millennial social-media bio, the data actually shows that Millennials aren’t drinking that much wine — at least compared with older generations.

“In my view, the issue of greatest concern for the wine business today continues to be the lagging participation in the premium wine category by the large Millennial generation,” wrote Rob McMillan, vice president of Silicon Valley Bank’s wine division, in his 2021 State of the Wine Industry Report.

Industry analysts have been bemoaning Millennials’ low rates of wine consumption for years. It’s been cast as a major generational shift: Unlike their parents, who took increasingly to wine as they entered adulthood and achieved financial security, Millennials are much more fickle in their drinking preferences. Part of that is because Millennials haven’t achieved the same financial security that their parents did; many entered the workforce during the Great Recession. Wine is often perceived as a luxury, and it tends to be more expensive per serving than other types of alcohol. Just look at a typical Bay Area restaurant menu, where a glass of good wine might cost $13 and a craft beer might be $7.

Only about 20% of Millennials are wine drinkers, according to McMillan’s report. They’re much more interested in craft beer, spirits, cocktails and now hard seltzer, which often do a better job of marketing their calorie counts or other health benefits, which is something Millennials care about. The vast majority — 71% — of wine consumption in the U.S. is still being done by Gen Xers and Boomers, ages 40 to 74.

Yet, as the Gen Z TikTokers are clearly picking up on, wine plays an outsize role in Millennials’ cultural identity. After a (presumably Gen Z) TikTok user called mayalepa posted a video announcing “I personally don’t want to be associated with people who still think that Harry Potter movies are a personality trait,” the comments came rolling in that shared in her critiques.

“All they do is drink wine, post cringy ’90s kid’ meme, talk about tech start-up and lie,” yeedledee wrote.

Another comment, from letzyy: “Or ‘ugh I hate adulting, just give me a slice of pizza and wine’ like sis, Rebecca you are 32 and an alcoholic pls sit down.”

I don’t need to get into the obvious — that most members of Gen Z are not of legal drinking age. The more important thing to note is that, for the most part, these youngsters have not yet been subjected to the task of “adulting.” (Maybe if they had, they’d use the word too.) Those two things are related here, since the trope of “wine o’ clock,” along with the “don’t talk to me before my coffee” expression, has been characterized as a coping mechanism for adulting, which, guess what kids, is actually pretty hard a lot of the time!

I’m reminded of a great New Yorker article by Jia Tolentino, “The Quiet Protests of Sassy Mom Merch,” about the rising popularity of t-shirts, mugs (and, yes, those ridiculous wooden placards) emblazoned with phrases like “the slant-rhyming trio of coffee, wine and Amazon Prime.” For moms, celebrating the fact that they rely on these balms to get through their harried, child-rearing lives can be seen as a way of them subtly, subversively fighting against some of the gendered expectations that put them in their situations, Tolentino writes.

Not all Millennials who put “wine o’ clock” in their Instagram bios are moms, and — more to the point — not everyone who drinks wine is doing it to cope with stress. (That is definitely a bad idea.) And clearly, if the wine industry is having this hard of a time winning Millennials’ business en masse, it’s got its work cut out for it as more people of the younger generation turn 21.

But, speaking as part of the Millennial minority that actually does drink wine, I’d just like to say to all you TikTok kids that as you enter into your late twenties and thirties, don’t write it off. Partly because you’ll have to start adulting, and that will be hard sometimes. Maybe you’ll continue drinking White Claw for the rest of your life. But I have faith that some of you will enter the ranks of good taste.

• Two Bay Area wine companies are planning to go public this spring, which is especially notable because there hasn’t been a major California winery IPO since the late 1990s. I wrote about why the previous winery IPOs all resulted in less-than-ideal outcomes and why the situation for the two soon-to-be-public companies, Vintage Wine Estates (whose CEO, Pat Roney, is pictured above) and Duckhorn Vineyards, will likely look very different.

• Virgil’s Sea Room, a beloved and nautical-theme queer bar in the Mission that had an amazing backyard, has permanently closed. It’s the latest in a string of bar closures that served San Francisco’s LGBTQ community.

• Attempts at gluten-free beer in the past have resulted in thin, watery, tasteless brews. But two new gluten-free breweries have opened in San Francisco and Oakland in recent months, and thanks to new developments in the science and supply chain, they’re actually making some pretty tasty beers, made from gluten-free grains like millet, buckwheat and rice.

This week’s pick is the Newfound Wines Gravels Grenache 2018 ($30, 13.9%), a delicate, lithe, energetic red wine from Matt Naumann and Audra Chapman. I talked to Naumann about why Grenache is such a promising grape for California’s future, thanks to its potential for turning out light wines when grown in hot climates. Read my review.

• Remember the Berkeley wine shop owner who was revealed to have carried about a $45 million Ponzi scheme by selling nonexistent Bordeaux futures? He’s now gotten out of prison, reports Frances Dinkelspiel in Berkeleyside.

• Just when it had reopened for outdoor service, San Francisco’s Pacific Cocktail Haven was significantly damaged in a fire on Monday morning, reports The Chronicle’s Janelle Bitker. All of the bar’s inventory is likely gone, but the owners are planning to rebuild and reopen.

• I love wine, and I love pizza, and consequently I enjoyed this exploration of the term “pizza wine” by Hannah Selinger in Punch. According to Selinger, this genre has evolved from the straw fiascos of Chianti that used to grace pizzeria tables to a swath of acid-driven, medium-bodied, natural red wines.

• Sonoma County has now vaccinated nearly 70% of its 12,500 ag and winery workers, according to the county’s winegrower association.

Home Videos The WORLD of WINE – Wine News. Cheap wine, tasting notes and cooking with wine The World of Wine – May 2021 … END_OF_DOCUMENT_TOKEN_TO_BE_REPLACED

How to visit Napa Valley on a Budget. In this video Carson and I explain a few ways to enjoy Napa on the cheap. Tip and advice about how to visit Napa … END_OF_DOCUMENT_TOKEN_TO_BE_REPLACED

Home Videos Get To Know Argentina Wine | Wine Folly If you love Malbec, Argentina is your ultimate wine region. But that’s not … END_OF_DOCUMENT_TOKEN_TO_BE_REPLACED