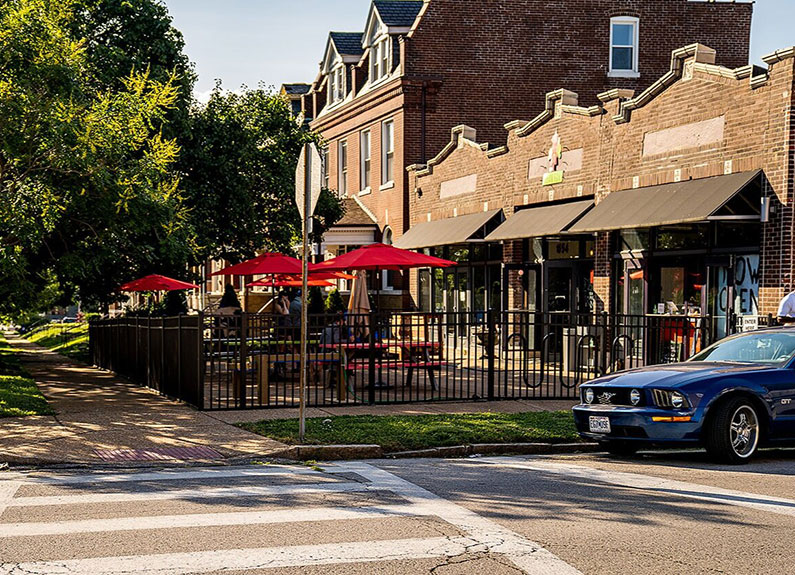 The McKinley Heights neighborhood will soon have a new gathering space. The cafe portion of the Urban Fort Play Cafe at 1854 Russell Blvd. is being replaced by a new concept, Gather Cafe, that aims to draw in not just parents and their children, but the neighborhood as a whole.

“The majority of play spaces in St. Louis do not offer food, only the play concept,” said co-owner Megan King-Popp. “We wanted to offer quality food and quality coffee to the parents that deserve it. The majority of these St. Louis kid museums have kind of the generic kid food that’s always offered at kid establishments. We wanted to go for something more upscale.”

Gather’s menu will offer a range of items, including a house-made quiche with custard and pie crust; and a turkey bacon panini made with thick wheat bread, chipotle aioli, tomatoes and greens; and a curry chicken salad with red onion and celery served on a croissant with tomatoes and greens. During the fall and winter, Gather will offer a vegan curried butternut squash soup with creamy coconut milk and lentils.

Gather has partnered with Blueprint Coffee and Living Room Coffee & Kitchen to offer a full coffee bar, with items like a lavender latte, orange-cardamom espresso and more. Tea will be from Big Heart Tea Co. There will also be a selection of beer and canned cocktails, including some nonalcoholic offerings, available from local purveyors like 4 Hands Brewing Co., 1220 Spirits and WellBeing Brewing, as well as Bota box wine.

When King-Popp and her business partner Monica Croke opened their play cafe in December 2018, it offered a play area on one side and a cafe on the other, but was a little less geared toward people just looking for a quick bite. Urban Fort was often mistaken as simply a daycare, so Croke and King-Popp wanted to refocus their goal of creating a community centered around not just a play space for children, but also good coffee and good food. The onset of the pandemic in 2020 was the perfect time to rebrand the establishment as two distinct companies – Gather Cafe and Urban Fort.

“Covid gave us the opportunity to rework the space to make it accommodating to both families and the neighborhood at large,” King-Popp said. “We now have soundproof walls that divide the play space from the cafe, so Urban Fort is on one side of the building and Gather is on the other. So the two are really just sister companies that embrace the surrounding neighborhood in the same way we embraced St. Louis families.”

Starting May 6, Gather Cafe will be open for dine-in service on the revamped patio, which has eight four-tops on the cafe side and two six-tops on a play side. Carryout will also be available. Indoor seating will be provided once the owners and staff feel more comfortable with the state of the pandemic, and there may also eventually be live band performances on the patio and wine tasting nights. Hours will be 7 a.m. to 3 p.m. from Wednesday through Sunday.

The play area is currently open for private play and open play by registration only, available online, for up to 15 children (age 6 and younger) at a time, and this model will continue when the Gather Cafe opens.

Home Videos The WORLD of WINE – Wine News. Cheap wine, tasting notes and cooking with wine The World of Wine – May 2021 … END_OF_DOCUMENT_TOKEN_TO_BE_REPLACED

How to visit Napa Valley on a Budget. In this video Carson and I explain a few ways to enjoy Napa on the cheap. Tip and advice about how to visit Napa … END_OF_DOCUMENT_TOKEN_TO_BE_REPLACED

Home Videos Get To Know Argentina Wine | Wine Folly If you love Malbec, Argentina is your ultimate wine region. But that’s not … END_OF_DOCUMENT_TOKEN_TO_BE_REPLACED