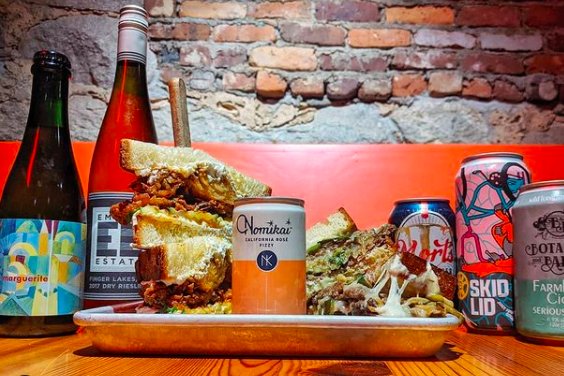 As far as food origin stories go, Chris Lopez, owner of pop-up concept Fine Folk in Raleigh, has a pretty classic one.

“My love of restaurants stems from growing up in suburban America,” Lopez says. “Going to places like Applebee’s and Chili’s. We want to draw a little bit of inspiration from that kind of dining and, you know, just using fun stuff and what’s local.”

Earlier today, Lopez announced that the pop-up had found a brick-and-mortar home at 2409 Crabtree Boulevard, Suite 101, in the former BREW Coffee space next to Union Special Bread. He expects the restaurant, a “high-end hole-in-the-wall,” to be open for business in late summer 2021 or early fall “at the absolute latest.”

Lopez, who has lived in Cary since he was 13 and Raleigh since he was 18, tried out a handful of concepts this past year: First, Gov’t Cheeseburger, a cheeky concept launched by Postmaster in March 2020, when pandemic restrictions made the restaurant turn to easy takeout dishes like Lopez’s legendary cheeseburgers.

The burgers—with their greasy, smashed double patties, seeded Union Special buns, lavish melty cheese, and offbeat sauces—attracted a devoted following. In November, Gov’t Cheeseburger closed shop after a successful run, and Lopez struck out on his own, launching Fine Folk with sous chef John Kleinert. From fall through late February, it was run out of Foundation Bar; last night, Lopez signed the lease for the permanent Gateway Plaza location.

On Instagram, the restaurant boasts an irreverent, approachable stream of memes, smiles, and towering burgers; Lopez says he hopes the new space will reflect this. It’ll need some overhaul (a kitchen, for instance) and some Craigslist and crate-digging to get the unpretentious, lived-in feel that ownership visions—like, for instance, “you’re in your uncle’s living room, from when you were a kid.”

Lopez says that he anticipates burgers and fries continuing to be a menu item alongside vegetarian options like the Beyond Burger, which is available at the same price point as a regular burger (“I’m not going to charge someone extra for caring about the planet,” Lopez says). Still, he and Kleinert are looking forward to moving toward more plated options.

“We’re just trying to cook some honest food,” he says. “Whenever people ask what the food is gonna be like, I honestly kind of tell them that ‘we’re gonna cook whatever we damn well please.’ We don’t really want to put ourselves in a box.”

“We are hoping that this can be a fun place that you can come hang out, have a few drinks, maybe split a bottle of wine with a couple of friends, and have a couple snacks,” he says, “and, you know, feel comfortable doing that a few times a month.”

Home Videos The WORLD of WINE – Wine News. Cheap wine, tasting notes and cooking with wine The World of Wine – May 2021 … END_OF_DOCUMENT_TOKEN_TO_BE_REPLACED

How to visit Napa Valley on a Budget. In this video Carson and I explain a few ways to enjoy Napa on the cheap. Tip and advice about how to visit Napa … END_OF_DOCUMENT_TOKEN_TO_BE_REPLACED

Home Videos Get To Know Argentina Wine | Wine Folly If you love Malbec, Argentina is your ultimate wine region. But that’s not … END_OF_DOCUMENT_TOKEN_TO_BE_REPLACED