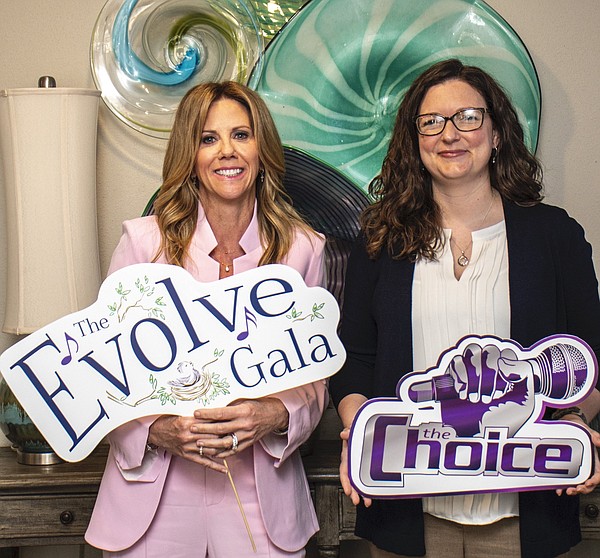 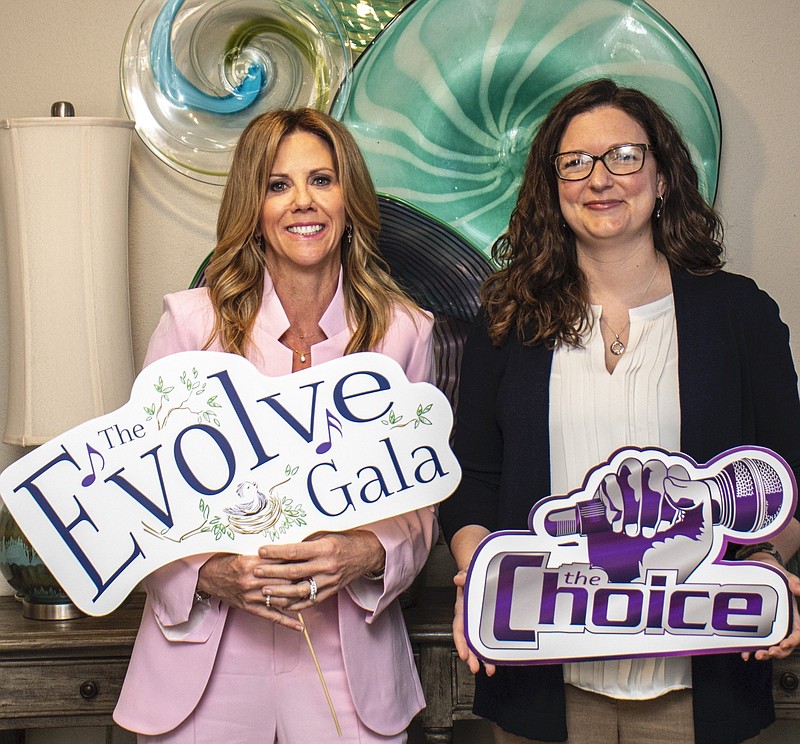 Wendy Hannah (left) is the co-chair and Erin Whitt chairs the auction committee for the Centers for Youth and Families’ April 16 virtual Evolve Gala, which includes a talent show called “The Choice” (inspired by TV’s “The Voice”) as part of its entertainment lineup.
(Arkansas Democrat-Gazette/Cary Jenkins)

In 2020 the Centers for Youth and Families first postponed, then moved its largest annual fundraiser, the Evolve Gala, online because of the pandemic.

The gala is back this year, though again as a virtual event, closer to its spring origins. The “Virtual Evolve Gala” is set for 7 p.m. April 16, with an online auction, an awards presentation and entertainment, all accessible via Evolve2021.GiveSmart.com.

This year’s Hero of Hope honoree is Greg Hatcher, chief executive officer of The Hatcher Agency, a Little Rock insurance firm. The program will also recognize 46 area young men in the nonprofit’s Champions of Hope leadership and philanthropy program.

Sponsors and guests can order dinner from Benton-based caterer Vibrant Occasions (the menu includes a salad, Chimichurri Chicken — or if you’re vegetarian, vegan and/or gluten-free, a spinach artichoke stuffed portobello mushroom — and, for dessert, a choice of strawberry cheesecake or four-layer chocolate delight). Pickup, along with a bottle of wine from Rusty Tractor Winery, is 4-6 p.m. that day at the winery, 10 Rusty Tractor Lane, off David O. Dodd Road in southwest Little Rock.

Tickets for the virtual show are $75; for $1,500 you can create a watch-party package for eight, including dinner and wine.

Wendy Hannah, co-chairing the gala with her husband, Kevin, says they got involved with the nonprofit after learning it created Arkansas’ first intensive residential treatment program for survivors of human trafficking, which is also the focus of this year’s gala.

“I spent 23 years at The Hatcher Agency, where the Centers was my client,” says Wendy Hannah, who has recently retired. “When I learned about this program, that drew me to become involved.”

The agency is, by its billing, “a national resource center for young people who have survived being sold for sex or labor.” Its Elizabeth Mitchell Adolescent Center reserves 32 beds “for survivors or young girls at risk of being trafficked.” The program started in 2014, and while it took a while to get on its feet, “it has really taken off,” Hannah adds.

It remains the state’s only in-patient juvenile facility for trafficked children, she says, currently housing youngsters as young as 12 and as old as 18, but with the ability to house children as young as 5. Around the corner, another building has as many as 20 beds available for boys, and yes, the agency has taken in boys from time to time.

“We’ve had trafficked girls from California and Texas, and a boy from Guatemala,” Hannah says. “It’s a model for other states.”

Hannah says planning for the gala started in September, and while it has still gone remarkably smoothly, “it has been a lot more detailed and involved than I realized.”

“When you have, as we have for number of years, such a good team, it all falls together fairly seamlessly,” she says. “We have a good quality group of volunteers, we’ve got the necessary people with experience willing to help with a passion” for the nonprofit.

Everything the gala makes on the actual night of April 16 will go directly toward the Centers’ mission to care for survivors of human trafficking.

“Kevin and I are also helping create the Human Trafficking Task Force in central Arkansas,” Wendy Hannah explains in the gala program, “inviting other people to join together to raise awareness and work to end this abuse that is sadly all too common.

“In January, we helped The Centers Foundation raise both awareness and funds through the sale of specially designed T-shirts and bracelets. Staff created shirts emblazoned with the message ‘End. Human. Trafficking’ and survivors in our care partnered with local boutique Bella Vita to create a beautiful bracelet. We are pleased to share that this effort was a success.”

The Hannahs have three sons — Hank, Sam and Max — “so we know the importance of teaching our children how to serve and make a difference and this program does just that.”

Foundation Director Melissa Hendricks says the fundraising goal for the gala is $370,000, and on the upside, the gala has met its sponsorship goal.

But auction committee chair Erin Whitt, who explains that her job and that of her committee members requires time, effort and connections to obtain prime items for the gala’s live and silent auctions, says that goal may be harder to achieve this year.

“Unfortunately, many businesses have suffered [during the pandemic] and are unable to make a donation,” she explains. In the past, she could have counted on donations of cars, golf carts or bicycles; now — for businesses, if they can give at all — it has been mostly gift certificates.

“You don’t have to buy a ticket to take part in the silent auction; anybody can register,” Hendricks says. “We would prefer to have done a live event, of course, just on a monetary basis, but a virtual event can still result in increased awareness of these kids and what they’ve gone through. They don’t care about covid, and we don’t want covid to be an excuse that they can’t ask for help.”

More information is available at centersforyouthandfamilies.net/foundation/fundraisers/evolve/. 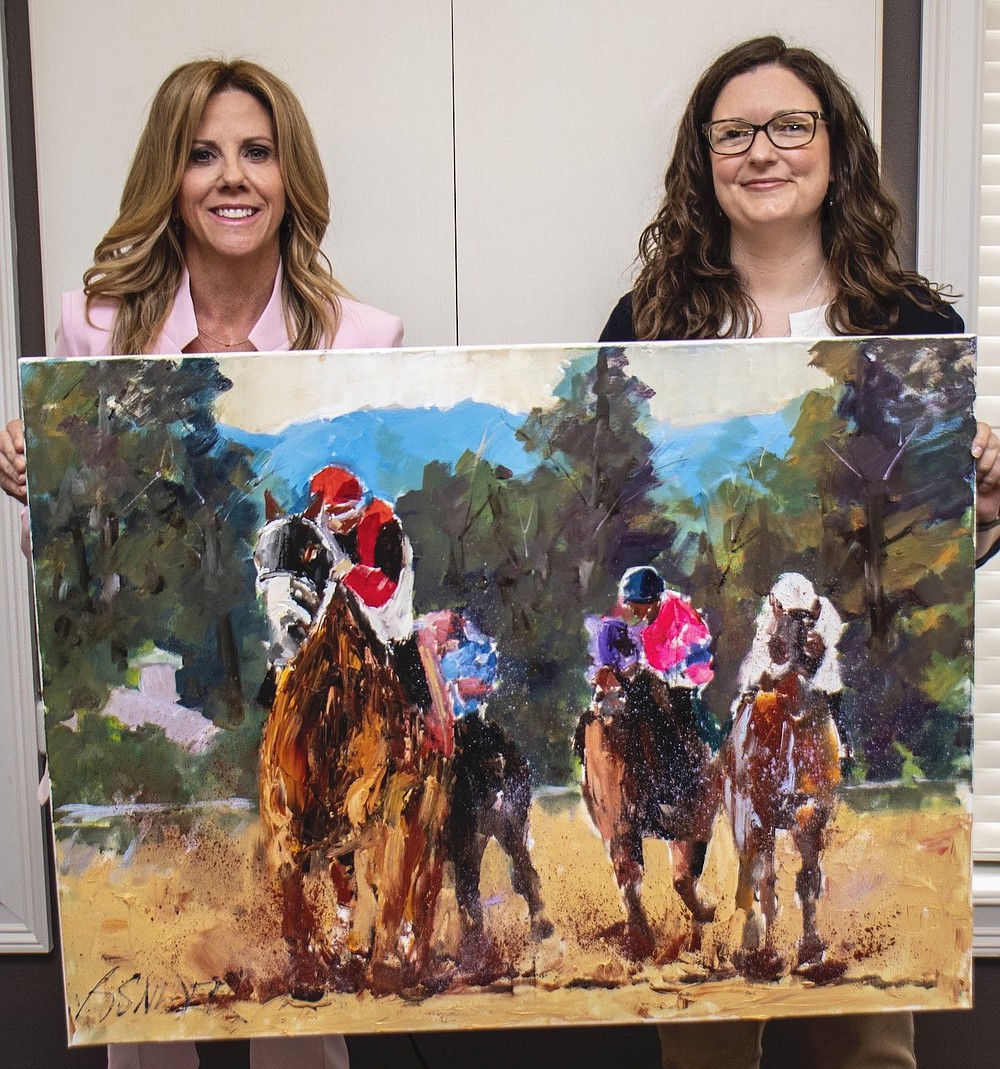 Evolve Gala co-chair Wendy Hannah (left) and auction committee chair Erin Whitt are off to the races with an oil painting by Bob Snider, among the auction items for the Centers for Youth and Families’ April 16 virtual gala.
(Arkansas Democrat-Gazette/Cary Jenkins)

Home Videos The WORLD of WINE – Wine News. Cheap wine, tasting notes and cooking with wine The World of Wine – May 2021 … END_OF_DOCUMENT_TOKEN_TO_BE_REPLACED

How to visit Napa Valley on a Budget. In this video Carson and I explain a few ways to enjoy Napa on the cheap. Tip and advice about how to visit Napa … END_OF_DOCUMENT_TOKEN_TO_BE_REPLACED

Home Videos Get To Know Argentina Wine | Wine Folly If you love Malbec, Argentina is your ultimate wine region. But that’s not … END_OF_DOCUMENT_TOKEN_TO_BE_REPLACED