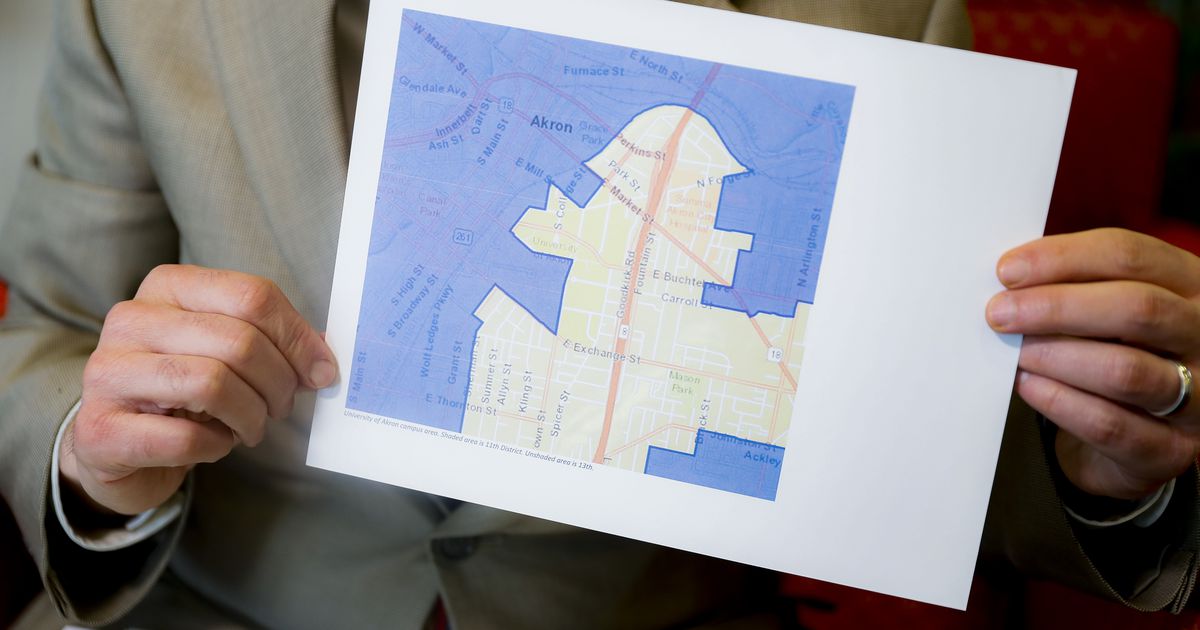 Many of us vote in elections in which the minority party has about as much chance of winning as ascending into heaven.

David Niven, a professor of political science at the University of Cincinnati holds a map demonstrating a gerrymandered Ohio district, Thursday, April 11, 2019, in Cincinnati. Congressional Democrats nationwide had a good year in 2018, gaining 40 seats. But Republicans held fast with 75% of Ohio’s House seats, despite winning only 52% of Ohio’s congressional vote total. “Not a single seat has changed hands,” said Niven, who testified for those challenging Ohio’s map. “Not a single seat. The point of this map was to build a seawall against the storm, and it has held.” (AP Photo/John Minchillo)

The Senate is taking up a big bill on voting rights. What do you think the 50 Republican members are going to do?

A. Invite the Democrats to a wine-tasting party in which the last 10 lawmakers standing get to make all the decisions.

B. Have Mitch McConnell announce that “as much as I would like to defeat this bill, effective government is more important than partisan advantage.”

Yeah, yeah. Terrible to feel so cynical, isn’t it? Well, we’ll see. The House put a lot of important reforms in the bill, many of them aimed at making it easier for citizens to vote. But today let’s look at another piece of the story that doesn’t get enough attention.

Gerrymandering is the age-old practice of trying to fix the boundaries of electoral districts to make sure your side gets as much advantage as possible. It’s named for Elbridge Gerry, who was governor of Massachusetts in 1812 after the legislature passed a bill setting the lines of state Senate districts to give his party a big boost. That required a lot of creative map-drawing, and critics thought one of the districts wound up looking like a salamander — or, wags said, a “Gerry-mander.”

Now the bill wasn’t Gerry’s idea. His son-in-law said he found it “exceedingly disagreeable” and pretty much all he did was reluctantly sign it. But it’s an excellent lesson in how careful you have to be if you’re planning to become a historical figure. You can devote your life to creating a new nation, championing the Bill of Rights, getting elected as James Madison’s vice president, and in the end the one thing people will remember about you is a district shaped like an amphibian.

The bill now headed toward McConnell’s dustheap would require states to establish independent redistricting commissions when they prepare new maps for their legislatures and congressional districts based on the 2020 census. In days of yore this was a job for a bunch of guys sitting around a table full of maps, slowly divvying things up. Now it’s done with computers, which makes it much, much easier to game the system.

“You have software that can give you 10,000 distinct variations in a number of minutes,” said Edwin Bender, executive director of the National Institute on Money in Politics. Check out its website for an index that will tell you, for instance, that in the fast-growing state of Texas, only 9% of the 2018 state legislative races featured a real contest. A large chunk didn’t have even a second contender.

Gerrymandering is one of the main reasons many of us vote in elections in which the minority party has about as much chance of winning as ascending into heaven. There are a few saintly lawmakers dedicated to reform, but plenty just concentrate on making the system work for them.

Pretend you’re a member of Congress. (Go ahead — pretend.) An angel appears to you with two maps of your seven-district state. In one, your party has at least a 40-50% chance of winning six. In the other, it has no hope whatsoever of taking four; a 65% chance of getting two; and a 97.7% chance of winning the one in which you happen to be running.

What would you do? If you quickly choose the very competitive option, congratulations! You are a person of strong moral principle who is highly unlikely to ever run for public office.

Right now in Louisiana, voters are picking a successor to Cedric Richmond, who gave up his House seat for a job as a White House adviser. The district, which resembles a very long and thin dragon balancing a ball on its nose, seems drawn to squish in as many Democrats — particularly Black Democrats — as humanly possible. (The rest of the state gets left to the Republican mapmakers.) So it was no surprise that it was all Democrats who came out on top in a special election this month, and two of them will face off in a runoff in April.

I am represented in Washington by Congressman Jerry Nadler, the powerful Democratic chairman of the House Judiciary Committee. One conservative publication tastefully described his district as something “that skips around the city like a bachelorette party bus.”

That would presume that the partygoers wanted to start on the Upper West Side of Manhattan, travel all the way down the borough across the Brooklyn Bridge and then down a little tiny passage to Borough Park. It looks less like a salamander than a Pekingese on a leash that stretches along Brooklyn and over to a very sturdy pole that’s stuck far away on the city’s northern end.

This mapmaking affects everything. Remember that anti-transgender bathroom law North Carolina passed in 2016? The folks who voted on it came from a brilliantly gerrymandered state legislature in which Republicans, who got only about half the statewide vote, nevertheless controlled a supermajority.

Democrats are well aware that they’ve been losing the redistricting game, but it’s going to take a lot of effort for them to turn things around. At which point they’d probably start redrawing future maps to their advantage. What we need is a reform-populist movement dedicated to dividing the states up more fairly. It’s up to you to start complaining, people. Elbridge Gerry is watching from above.

Gail Collins is an Op-Ed columnist for The New York Times.

Home Videos The WORLD of WINE – Wine News. Cheap wine, tasting notes and cooking with wine The World of Wine – May 2021 … END_OF_DOCUMENT_TOKEN_TO_BE_REPLACED

How to visit Napa Valley on a Budget. In this video Carson and I explain a few ways to enjoy Napa on the cheap. Tip and advice about how to visit Napa … END_OF_DOCUMENT_TOKEN_TO_BE_REPLACED

Home Videos Get To Know Argentina Wine | Wine Folly If you love Malbec, Argentina is your ultimate wine region. But that’s not … END_OF_DOCUMENT_TOKEN_TO_BE_REPLACED