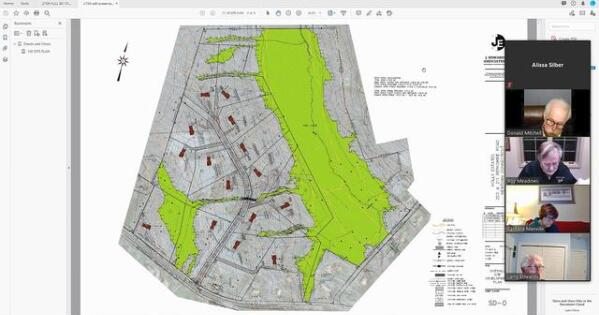 Husband and wife Ardian Llomi and Neviana Zhgaba, owners of Aquila’s Nest Vineyards at 56 Pole Bridge Road, spoke on behalf of Application 20.14 seeking a text amendment to the zoning regulations regarding the approval of various functions at the vineyard.

Llomi thanked the commission for allowing them to open their business last year and said that they are submitting this application because their company is “very limited” in the events they can do.

Zhgaba explained, “That’s why we wanted to put in more detail the types of activities we want to have at the vineyard. A lot of these activities have happened before in the past few months since we opened by the special approval from the zoning department.”

They are looking to make it a permanent zoning regulation where they will not have to seek special approval for every activity.

They are hoping to add that vineyards and wineries can be allowed one food truck on the premise at any one time; conduct private gatherings such as birthdays, corporate events, and weddings with wine and food offerings from the vineyard or pre-approved catered food indoors and outdoors; conduct events such as food and wine pairings, paint and sip, and craft and sip, where the vineyard partners with local businesses and has wine/food catering as a component; art installations in the vineyard for local artists to display work and possibly have it for purchase; and a small farmers market in the vineyard for no more than five farmers.

Zhgaba said they received a lot of positive feedback from the events they have done so far and that there is interest to continue these functions in the future.

She read a letter submitted by Andrea Spencer of the Cultural Arts Commission, where Spencer gave her support for passing the text amendment.

P&Z Chair Don Mitchell said his initial thoughts on the text amendment is that these are “lovely activities” for their vineyard.

“A lot of vineyards are in residential zones, as is yours, and we have to be careful about introducing business uses as a right,” Mitchell said.

If they permit these for the zoning regulations, the commission would not be able to examine the activities — and their potential traffic and neighborhood impact — on a case-by-case basis to determine if they are appropriate. It would also retroactively apply for existing vineyards.

“These kinds of activities, in residential zones especially, are so subject to the peculiarities of a particular neighborhood that if they are going to be allowed, I’d want to see them by permit and not as an allowed use in a special exception,” Mitchell explained.

Land Use Agency Director of Planning George Benson spoke to the commission about how he has been working on a separate draft for the last two years for vineyards and farms regulations for activities, which was presented as a separate document from the applicants’ submission.

Benson suggested they continue the hearing and he can work with the applicants. He also wanted to get the commission’s input in the meantime.

P&Z member Corinne Cox voiced that she has concerns with the noise and traffic that these functions could create in the residential area.

Fellow commission member Jim Swift added that he agreed with Mitchell in that he feels these could continue to be special exceptions.

P&Z member Barbara Manville also noted a concern with potential noise and too many people attending the functions.

The commission approved continuing the public hearing to the next P&Z meeting, on January 21, via Zoom.

The P&Z commission had its second public hearing on January 7 for Application 20.13 by Negreiro & Sons Construction, LLC, with plans titled “Holly Estates.”

The applicant is seeking to create a 16-lot residential subdivision with 15 single family homes located at 203 and 211 Berkshire Road (Route 34). The parcel is a 73.2-acre site that is currently a mixture of forest, old fields, and currently farmed fields that supports a variety of wildlife.

At the application’s first P&Z public hearing, on December 17, 2020, there was information presented about the land and sight line that were relevant to the following meeting’s discussion.

In that initial meeting, Larry Edwards of Edwards Associates represented the applicant and explained that all lots would be serviced from a newly constructed road, except for Lot 1, which would be serviced directly from Berkshire Road.

It was noted that 37 percent of the property would be left as open space.

Swift asked what percentage of that open space is wetlands, and Edwards replied that about 21 of the 27 acres are either wetlands or steep slopes.

Cox inquired if the wetlands would expand when it rains and was told by Edwards that there would not be an issue with residents’ backyards.

Commission members also raised concerns about the obstructions in the sight lines of the road when coming out on Berkshire Road (Route 34).

On January 7, Edwards said that he addressed Deputy Director of Land Use Rob Sibley’s comments and added a right-of-way to the end of the cul-de-sac, though it was not what the applicant preferred.

Mitchell clarified later in the meeting that there is another subdivision “in the wings north” that would be able to hook up with the Holly Estates road for a second access-way.

“It would be my client’s wish to leave it as a cul-de-sac, but we understand this is something the commission would have to look at,” Edwards said.

He informed the P&Z that the Conservation Commission has not yet had a meeting to approve the open space and it is not yet determined if the Newtown Forest Association (NFA) will be accepting the donation of land instead of the Town of Newtown.

Mitchell inquired about the Connecticut Department of Transportation’s (DOT) actions and Edwards said that DOT will not give final approval on the project until the P&Z does. Mitchell explained he is still concerned about the sight line, but said if DOT approves it, it would be good for him.

However, Mitchell noted that when he did walk of the property and compared it to the aerial provided, he found some discrepancies with where some of the lot stakes were placed.

P&Z alternate member Roy Meadows said he did a site walk and was able to find the driveway stakes, but his main concern was the sight lines.

“The exit to that road where it comes out to Route 34 is marked, there’s a ribbon around the telephone pole there, and there’s some real problems whenever you look to the left. The road is coming up the hill and around the curve,” Meadows said.

He explained that when he was standing out where the Holly Estates’ road is proposed, he looked down the road to see if there were cars coming and did not see any. Then, suddenly, cars appeared where Meadows was not expecting them to be, and he realized he had been originally looking down Chestnut Hill Road and not Route 34.

He referenced this because it was an easy mistake that others could make due to the angle.

“There’s some real problems with the road coming out at that point there. It may meet all the DOT regulations and everything, but I think we have to be concerned about the citizens of Newtown,” Meadows said.

He asked Edwards if it would be possible to move the road 200 feet to the west, which would be over more wetlands but would give a better sight line in both directions.

Edwards acknowledged the sight line is currently “not anywhere near acceptable.”

Edwards went on to say the area in front of the house has to be regraded to lower it and they will have to remove “a large percentage of trees.”

Cox asserted that it still does not change the curve to the road and said, “It’s dangerous.”

Manville added that in addition to the curve there is the hill obscuring the traffic.

“DOT is the ultimate one that has to sign off on this…” Edwards responded. He said they are complying with the DOT, which is the “ultimate expert.”

Commission members agreed with Meadows and discussed possible solutions for adjusting the roadway.

“I’d like to see the subdivision go, but there is a safety component here that I think we, the commission, have to be worried about,” Meadows said.

Benson said since Route 34 (Berkshire Road) is a state road, it really is up to DOT if they feel the proposed plan is sufficient.

“I understand that, George, but I’m trying to see if we can work out a better thing here and propose that to the DOT,” Meadows said.

Swift said he agrees with Meadows that pulling out from there is “hazardous” and that Meadows has a “great idea.”

When Swift asked Benson if they can deny the application due to traffic concerns, Benson said, “If the DOT says it is a safe entry out to Route 34 – no.”

However, Benson added, “DOT doesn’t approve it until after we are done… your approval will be contingent upon DOT giving them a permit. If they don’t get a permit from DOT, they can’t build it.”

If the P&Z creates a new spot for the Holly Estates’ road, then it would go back to the Inland Wetlands Commission (IWC) for approval.

Edwards said IWC chose this road option over another that was proposed, because it had less impact on the wetlands.

Mitchell said it is reasonable to come up with another option.

Newtown resident Dennis Casey, whose property borders the Holly Estates parcel, spoke about how he hoped the “pristine wetlands” would remain preserved and not built upon nor have any storm debris dumped on it from the town.

When asking if hunting would be permitted there, Benson said hunting is not allowed on town open space.

At the first P&Z meeting for the application, on December 17, Casey also voiced concerns for how the subdivision would impact the water table and wells in the area, including his.

He and multiple residents had similar worries for the subdivision’s impact on their properties and brought it to the attention of the IWC last year.

Casey said he objects to the subdivision on the grounds that it is not compliant with the Plan of Conservation and Development.

The commission approved continuing the application’s public hearing to the next P&Z meeting on January 21 via Zoom.

For more information about the Planning and Zoning Commission, visit newtown-ct.gov/planning-zoning-commission. Call the P&Z office at 203-270-4276 for information on participating in meetings virtually.

The Planning and Zoning Commission reviews site plans for the Holly Estates subdivision off Route 34 during a Zoom meeting on January 7.

Home Videos The WORLD of WINE – Wine News. Cheap wine, tasting notes and cooking with wine The World of Wine – May 2021 … END_OF_DOCUMENT_TOKEN_TO_BE_REPLACED

How to visit Napa Valley on a Budget. In this video Carson and I explain a few ways to enjoy Napa on the cheap. Tip and advice about how to visit Napa … END_OF_DOCUMENT_TOKEN_TO_BE_REPLACED

Home Videos Get To Know Argentina Wine | Wine Folly If you love Malbec, Argentina is your ultimate wine region. But that’s not … END_OF_DOCUMENT_TOKEN_TO_BE_REPLACED