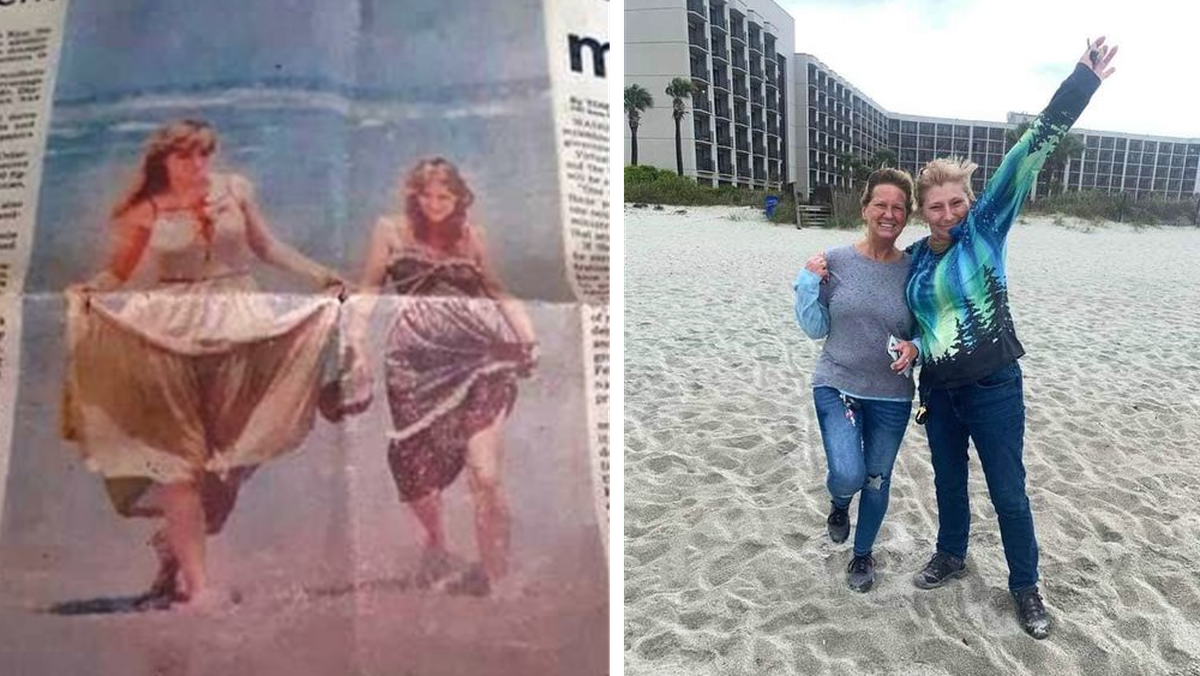 It was no longer spring break, but it was still a teen’s dream vacation: Florida-bound from the chilly Midwest on a $99 flight with a wine tasting on board, then a couple of days of getting wet and sunburned on the beach.

It was Wanda Wild’s first flight, and her friend Karen McCain’s first one on a commercial airliner. The year was 1981. They were 18 and 19 and had grown up together in suburban Chicago, just under the southern edge of Lake Michigan.

When they got to Daytona Beach, they spent two or three hours just walking barefoot along the shore, reveling in the warmth.

At one point, Wanda recalls, “We saw these weird guys sitting in a car with their cameras out the window. They called us over and asked who were were.”

Neither Wanda nor Karen remembers whether the men said they were with the newspaper. But the next day, they were stunned to see themselves in news racks, printed on the front page of each and every Sentinel Star (the Orlando Sentinel’s previous name).

The friends had no idea they were being photographed before the journalists got their attention.

“To this day I don’t get it,” Wanda said with a laugh this week, almost exactly 40 years after the day of the photo. “You’ve got all these hot chicks at the beach in bikinis, and you decide to pick the ones who have dresses on.”

But the visual appeal of the image is clear. Karen on the right, the more petite friend at exactly 5 feet tall, smiles as she talks, engrossed in their private conversation. Both women are bunching their long sundresses up around their thighs as they splash in the surf. Their loose hair spills past their shoulders.

Behind them, the blues of the sky and ocean blend and merge into the light tan of the sand, in a backdrop no modern-day Instagram filter could ever re-create.

Although the beach must have been populated that day, the frame captures the friends alone, as though in their own world.

Life would soon take them in different directions. Karen, who had recently married and had a son, moved to the Carolinas not long after the Daytona weekend. Now 59, she’s in Myrtle Beach, where she has lived for decades.

Wanda married young as well, and had three children. Now 58, she has remained in Indiana.

Both women’s marriages ended in divorce. Children grew up and moved away. But their friendship endures. They call and text constantly and have visited each other about twice a year since their 20s.

“Karen has always been in my life,” Wanda says.

“No one has the bond Wanda and I have,” Karen says.

They met as children at Emmanuel Baptist Church in South Haven, Indiana, where both their fathers were deacons. Almost every weekend was spent at Karen’s, whose family lived on a couple of acres cut out of a cornfield in Hobart. Their house had a swimming pool and a pool table.

Karen had four older brothers, so Karen’s mom — who was “Mom to everybody,” she says — always made sure there were plenty of fun things for kids to do.

The girls went to summer church camp together in Wisconsin, and attended the same high school.

Wanda and Karen visited Daytona Beach again five years ago, on the 35th anniversary of their front-page photo, to take another picture and re-create the scene. Karen carried a copy of the 1981 newspaper for reference, using a plastic bag to protect the yellowing pages from wind and water.

“That picture is a very nostalgic memory for us,” Karen says. “It was a big deal to us. We were from a small town — we thought we were somebody, you know. That made our day. It made our trip.”

That 2016 re-creation was on an old phone and is now gone. But the friends spent time together again in late April in Myrtle Beach and posed for another beach photo, at the spot where they like to go to watch the sunrise.

On their most recent visit, the weather was chilly and rainy, but the friends went all over town doing touristy things. Wanda still has seashells in her purse.

“When you have a foundation that goes back to childhood, it’s something you work at keeping,” Wanda says. “Not many things in this life last forever.”

Home Videos The WORLD of WINE – Wine News. Cheap wine, tasting notes and cooking with wine The World of Wine – May 2021 … END_OF_DOCUMENT_TOKEN_TO_BE_REPLACED

How to visit Napa Valley on a Budget. In this video Carson and I explain a few ways to enjoy Napa on the cheap. Tip and advice about how to visit Napa … END_OF_DOCUMENT_TOKEN_TO_BE_REPLACED

Home Videos Get To Know Argentina Wine | Wine Folly If you love Malbec, Argentina is your ultimate wine region. But that’s not … END_OF_DOCUMENT_TOKEN_TO_BE_REPLACED