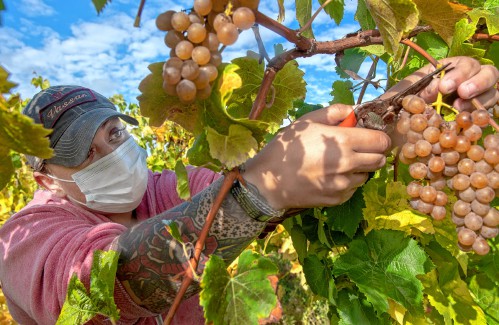 Walking between rows of vidal blanc grapevines on a recent and warm Saturday morning, a group of masked volunteers carefully snip hanging fruit into bunches and place them into red baskets on the ground for collection.

The harvest marked the beginning of a process that will end with the grapes being turned into local wine — with this specific bounty being used to create a “straight Vidal” as well as an ice wine, said Ed Hamel, who co-owns Glendale Ridge Vineyard in Southampton his wife, Mary Hamel.

One of the volunteers who may very well be drinking the grapes he hand-picked sometime next year is Dennis Hayden, who came to the vineyard earlier this month with four of his family members to help the Hamels. And as the morning fog slowly rolled off of Mt. Tom in the far distance, Hayden noted that volunteering felt almost like a “mental holiday.”

“They have a little hidden gem here … The location is spectacular,” said Hayden, of Springfield. “It’s picturesque. I think it makes the wine taste better.”

Glendale Ridge Vineyard is on Ed Hamel’s property, which he said was an old dairy farm. He said he and his wife, Mary, started with just 120 grapevines in 2010 and have since expanded to five acres of different varieties of grapes, such as vidal blanc, traminette, corot noir, cabernet franc, aromella and itasca. Hamel said that out of all five of his acres, he expects to collect about 18 tons of grapes in total, which he said is an average yield. He said he buys grapes from places like Long Island, too.

White grapes are typically, crushed, de-stemmed and pressed into juice immediately after harvesting before fermentation, Hamel said. The red grapes at his vineyard are also crushed, but the skins are kept on for color and the grapes remain in oak barrels for fermentation.

Alex Bienvenue, Glendale Ridge’s production winemaker, said that the vidal blanc grapes will be created into orange wine, which means that the white grapes will ferment with its skins kept on — similar to the process for red grapes. Hamel said the vidal blanc will be bottled before March of next year.

The vineyard has a wine-tasting room that was shut down at the beginning of March after only a few weeks of being open because of the COVID-19 pandemic. Hamel said that before the pandemic, the vineyard also hosted live music.

He said that at the very start of the pandemic, to-go wine sales were pretty strong. That faded as people adjusted to the new normal. In the summer, the vineyard used part of its property for people to park their cars and tailgate, with each space over 20 feet away from its neighbor for proper social distancing. At first, the tailgating wasn’t so popular because of the hot weather, Hamel said, but in August the weather improved and more people started to come.

“People really appreciate it a lot because there is a lot of distance between … people,” Hamel said. “Everything we do now is outside. Everything.”

Also volunteering on this recent Saturday were Tony and Celine Zimmerman, of Easthampton, who began volunteering at the vineyard two years ago but had been coming for the wine for even longer. Celine said that volunteering gives her a greater appreciation of the wine she enjoys.

“It’s a great opportunity to be outside, and help out Mary and Ed,” Tony Zimmerman said.

Glendale Ridge sells its win at the farm and online at glendaleridgevineyard.com/wines/current-releases.

As a young kid growing up in a large Italian family in Springfield, Larry Godard of Mineral Hills Winery on Godard’s Red Hen Farm in Florence said he would often play in the cellar where his winemaker grandfather kept barrels.

“I grew up in the culture,” Godard said.

Godard, who co-owns the winery with his wife Susan, said he opened the winery on his farm in 2010, when he started making only five wines — only to quickly learn that “the palates here in New England require a wider variety of wines, so we do about 15 different varieties of wine.”

“We go from those dry, complex reds and whites … all the way to dessert wines, like ice apple wine, blueberry wine, mead,” he said. “We run the whole gambit of wines so we can please all palates.”

About 25 wineries, including Godard’s, are part of the Massachusetts Farm Wineries & Growers Association, though Godard said there are others that are not members. Godard said that growing grapes “is not easy to do” in the Northeast due to the climate. That’s partly why he grows hybrid grapes that are hardier but still produce “award-winning wine.” He said he also imports types of grapes from California, such as cabernet sauvignon: “That’s one of my favorites,” Godard said.

Out of the 60 acres on Godard’s Red Hen Farm, about two acres are used for apples, blueberries and vineyard. Godard said he started the farm around 1985 and added the wine operation in 2010 that he said “turned our farm from always being in the red to actually being in the black.”

“We never made money at the farm,” Godard said. “But the moral of the story, I guess, is sell alcohol.”

Godard’s “crush season,” which is what he said wineries call harvesting season, started around mid-October and that he expects it to end the beginning of November. Some of his wines will go to bottle next spring, he said, and he expects to produce about 15,600 to 21,600 bottles of wine.

“We’re at the right size for what we want to do,” he said.

Godard said his wine is available in all of the Big Y’s in Massachusetts with a liquor license, as well as some Liquors 44 and others.

“It’s not just any old business, it’s something you have to have a passion for,” Godard said about his winery. “You really gotta love what you’re doing.”

Michael Connors can be reached at mconnors@gazettenet.com.

Home Videos The WORLD of WINE – Wine News. Cheap wine, tasting notes and cooking with wine The World of Wine – May 2021 … END_OF_DOCUMENT_TOKEN_TO_BE_REPLACED

How to visit Napa Valley on a Budget. In this video Carson and I explain a few ways to enjoy Napa on the cheap. Tip and advice about how to visit Napa … END_OF_DOCUMENT_TOKEN_TO_BE_REPLACED

Home Videos Get To Know Argentina Wine | Wine Folly If you love Malbec, Argentina is your ultimate wine region. But that’s not … END_OF_DOCUMENT_TOKEN_TO_BE_REPLACED