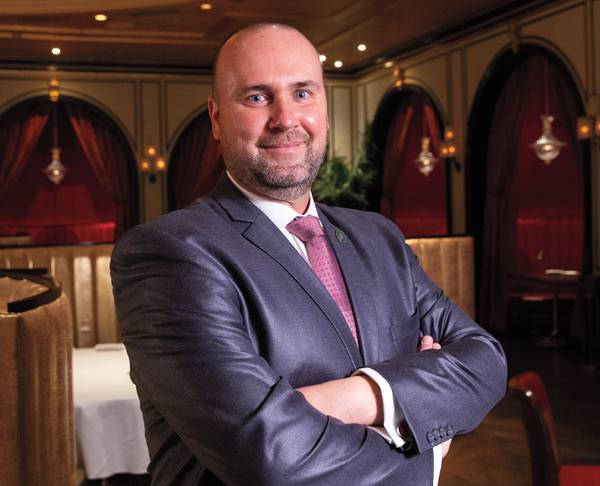 You’d never know it by looking at Hristian Iliev now, but when he was a teenager, he had a mohawk and played guitar for a hard-core punk band in his home country of Bulgaria. Iliev says he had a passion for music and the scene, and now he’s found that same passion in a career that’s nearly two decades long.

Iliev is the lead sommelier for Carbone at Aria. “One of the most exuberant, exciting feelings you can have is playing punk music onstage for people,” he says. “And for me if you find a wine that can give you that same experience, and I have, I’ve had those same experiences with wine that I used to feel onstage.”

Iliev first moved to Las Vegas in the late-’90s, and his first job working at a Caesars Palace restaurant helped spark his interest in becoming a sommelier. By 2004, he helped open Mix at Mandalay Bay, where he worked for eight years and ran a wine program that featured 2,500 labels. In 2012, Iliev joined Aria, working as a sommelier at restaurants like Bar Masa and Sage, and in 2015, he helped open and build the wine program for Carbone.

Today, Iliev is an advanced sommelier, but wine was in his life long before being certified. “I’ve been around grapes and vines since I was young,” he says, explaining that he grew up working in his family’s vineyards.

“I love to show the world where the wine comes from, who makes it,” he says. “It’s almost like the wine takes them to the place it comes from.” And that’s what Iliev is doing at Carbone, with the Italian restaurant’s more than 700 labels of Italian, French and American wines. “I’ve grown to really love Italian wines, he says. “What I really love about Carbone is it really is like a homemade meal executed at its best. It’s that simple. You leave the restaurant, and you’ll remember what you had.” And something tells us you’ll remember Iliev, too … even without the mohawk. Iliev chose this white wine not only because of its rich flavor with slight floral notes, but because of the family behind the label. The vineyard is located in Italy, and Emidio Pepe, at more than 80 years old, along with his family, makes organic, natural wines with no pesticides used. “The family is an exciting one, and their love for wine and the process of making wine is exciting,” Iliev says. “To me it’s one of the most exciting pairings with our signature spicy rigatoni.”

Benefit: Carbone has an incredible rum selection, with classic offerings to rare finds such as the Appleton 50-Year and Black Tot British Royal Naval.

Click here for your free subscription to the weekly digital edition of Las Vegas Magazine, your guide to everything to do, hear, see and experience in Southern Nevada. In addition to the latest edition emailed to every week, you’ll find plenty of great, money-saving offers from some of the most exciting attractions, restaurants, properties and more! And Las Vegas Magazine is full of informative content such as restaurants to visit, cocktails to sip and attractions to enjoy.

Home Videos The WORLD of WINE – Wine News. Cheap wine, tasting notes and cooking with wine The World of Wine – May 2021 … END_OF_DOCUMENT_TOKEN_TO_BE_REPLACED

How to visit Napa Valley on a Budget. In this video Carson and I explain a few ways to enjoy Napa on the cheap. Tip and advice about how to visit Napa … END_OF_DOCUMENT_TOKEN_TO_BE_REPLACED

Home Videos Get To Know Argentina Wine | Wine Folly If you love Malbec, Argentina is your ultimate wine region. But that’s not … END_OF_DOCUMENT_TOKEN_TO_BE_REPLACED