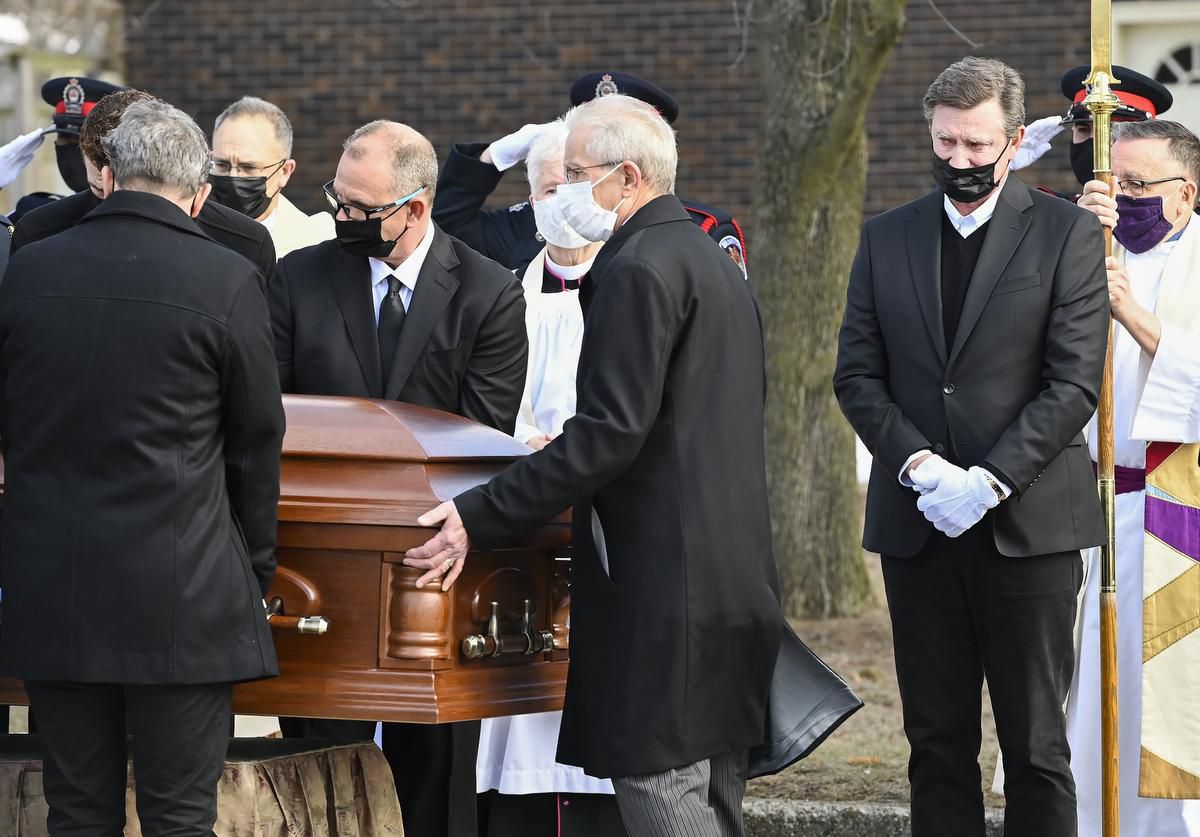 updateArticle was updated 5 hrs ago

The world’s most renowned hockey dad, remembered for having a “love for life” and being important to the “culture of Canada” by his legendary hockey son, was laid to rest on Saturday.

Walter Gretzky’s funeral took place at St. Mark’s Anglican Church in Brantford, Ont., but was significantly scaled back from anywhere near the scope and grandeur fitting the mark he left, with capacity limited to 30 per cent due to pandemic protocols.

“I don’t think I met a prouder Canadian than my dad,” Wayne Gretzky said of his father. Dozens of community members, including throngs of youngsters donning hockey uniforms, gathered outside the church, located near the home where Gretzky raised his family. Wayne told the sombre gathering of family and friends that his father, who suffered a brain aneurysm in the early 1990s and had a decade-long battle with Parkinson’s disease, had sustained a bad hip injury a few weeks ago.

Gretzky clung to life for 21 days, with his family sitting with him, similar to how he fought after numerous other debilitating health complications over the years. He died March 4. He was 82.

“We thought weeks ago that the end was here,” Wayne told the mourners. “He had a love for life and he didn’t want to leave.”

Wayne called his late father a remarkable man who had a “heart of gold.” He said the world would be better off if there were many more people like him.

He thanked the community for leaving food and sandwiches as the family waited for the worst.

Wayne told a fond story about how his father missed the birth of one of his sons, Brent, so that the two of them could attend a tournament in Whitby.

When bothered by family and friends about missing the birth of his boy, an irritated Gretzky responded, “Yes, but we got the trophy,” Wayne recounted.

“Every grandchild loved him,” Wayne said describing Walter’s close relationship to his grandchildren. “They understand how important he was, not only to our family but to the culture of Canada.”

Gretzky was remembered as a man of faith who cherished family, hockey and church. The gathering also heard how he treated everyone equally and was willing to volunteer his time and raise money for charities.

“Walter was great with kids, our kids, and all those kids he coached in minor league over the years, and those kids who came up to him for an autograph,” said Tim Dobbin, the former parish priest at St. Mark’s who presided over the funeral. Wayne tweeted the news of his father’s death on behalf of the family late Thursday:

Walter Gretzky rose from humble beginnings to become the patriarch of this country’s most legendary hockey family.

Wayne honed his skills in a backyard rink that Walter built for his children and neighbourhood kids. It was dubbed “Wally Coliseum.” That’s where he taught his sons the basics of the game.

Walter was born on the family farm in Canning, Ont., in 1938, where his mom made “good, old country Polish food,” including perogies that were “second to none,” he wrote in his autobiography, “On Family, Hockey and Healing.” His father, from Russia, specialized in making wine. Walter went to work for Bell Canada as a technician after finishing school, and is reported to have lost hearing in one ear after an on-the-job injury. He stayed with the company until 1991, when he retired after 34 years.

Wayne had barely learned to walk when Walter had him out on his backyard patch of ice, teaching him to skate.

Walter also coached two other sons. Keith Gretzky is assistant general manager of the Oilers. Brent Gretzky played 13 games in the NHL, all with Tampa Bay, and played a season in the Maple Leafs system when the top farm team was in St. John’s, N.L.

Friends recalled that Walter was also an astute coach of other boys in the Brantford minor hockey system, including former Boston Bruins tough guy Stan Jonathan. In 2007, he was named to the Order of Canada, recognized for his contributions to minor hockey and support for numerous charities and non-profits, including the Canadian National Institute for the Blind and the Heart and Stroke Foundation.

In 2010, he carried the Olympic torch hours before the opening ceremony of the Vancouver Winter Games.

With files from Star staff

Jason Miller is a Toronto-based reporter for the Star covering crime and justice in the Peel Region. His reporting is funded by the Canadian government through its Local Journalism Initiative. Reach him on email: jasonmiller@thestar.ca or follow him on Twitter: @millermotionpic

Home Videos The WORLD of WINE – Wine News. Cheap wine, tasting notes and cooking with wine The World of Wine – May 2021 … END_OF_DOCUMENT_TOKEN_TO_BE_REPLACED

How to visit Napa Valley on a Budget. In this video Carson and I explain a few ways to enjoy Napa on the cheap. Tip and advice about how to visit Napa … END_OF_DOCUMENT_TOKEN_TO_BE_REPLACED

Home Videos Get To Know Argentina Wine | Wine Folly If you love Malbec, Argentina is your ultimate wine region. But that’s not … END_OF_DOCUMENT_TOKEN_TO_BE_REPLACED