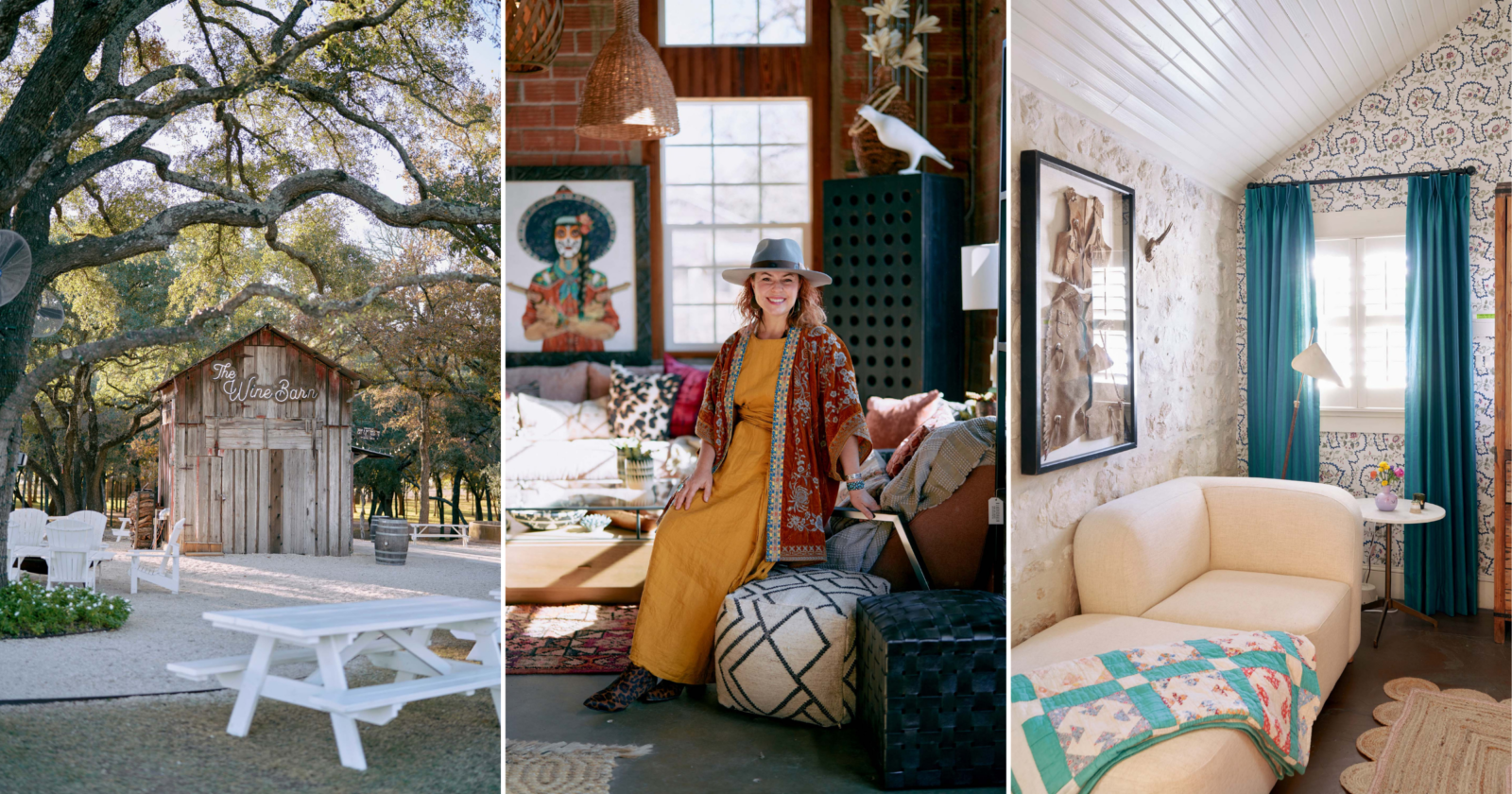 The Hill Country haven marks 175 years this spring, and a crew of locals keep it flourishing

On a freezing afternoon late last winter, I drove west on I-10, leaving my home in San Antonio for a yearlong sabbatical in Fredericksburg. Though only seventy miles away, the town couldn’t feel more removed from my life back home. Fredericksburg may be little, especially by Texas standards—population 12,135—but it boasts a big reputation. Known for its sweet summer peaches, a booming wine industry, and its German heritage, it will begin celebrating its 175th anniversary this May with a year’s worth of festivities. But even a weekend exploring its mix of historic and modern charms—and reveling in its springtime wildflower show—can feel like a reset.

For a landing pad, check in to the Trueheart Hotel, with its twelve cottages and lush, meandering garden nestled just off Main Street. Nick and Alice Adair purchased the property, previously called the Sugarberry Inn, last summer and launched a complete overhaul. Sitting on the sun-drenched patio, I hear the couple’s cockapoo, Mr. Bean, rustling in the flower beds as Alice explains her vision. “I wanted an homage to Texas with an element of earthiness and not overly feminine,” she says. The result is a “pop retro meets Western meets Hill Country” aesthetic that shines through in festive Pierre Frey wallpapers, traditional Scalamandré fabrics, scalloped door frames painted by the English expat designer Miranda Gill, and watercolors of Texas flora and fauna by the San Antonio artist Tara Gill.

Friday nights in Fredericksburg can be surprisingly bustling, nowhere more so than at Vaudeville. A partnership between chef Jordan Muraglia and artist Richard Boprae, the venue is part bistro, part boutique. “Texans already have a je ne sais quoi,” Boprae says, “but somehow, when one crosses the city limit of Fredericksburg, there is a joie de vivre that possesses everyone.” Treasures abound in the showroom—Assouline books, Baccarat crystal, Kyle Bunting rugs—while the scents of burrata with truffle asparagus and braised Akaushi short ribs waft from downstairs. I rearrange my schedule when Vaudeville hosts one of its supper clubs, lavish seasonal dinners that are among Texas’s best-kept secrets. The winter menu explored the Japanese tradition of omakase—the chef’s choice of raw and roasted delights—with wine and sake pairings.

Come Saturday morning, I like to ponder the day’s itinerary over a cup of locally roasted coffee at Caliche Coffee Bar & Roastery, set in a onetime beer shack downtown. Directly across the street stands the Pioneer Museum, which invites an amble through a one-room schoolhouse and displays of historic homesteads that recall the German immigrants who settled here in the mid-1800s. For another look at the Texas experience, I walk just a block away to the San Antonio gallerist Charles Morin’s new space. Morin is a passionate scholar of vintage Texas art by celebrated figures such as Porfirio Salinas, whose oil canvases depicting fields of bluebonnets hang next to intricate hand-drawn maps and a collection of utilitarian pottery.

Along Main Street, the nineteenth-century stone buildings remain testaments to the area’s German heritage. A statue of hometown hero Admiral Chester Nimitz greets visitors just outside the National Museum of the Pacific War. One of the nation’s premier military museums, the fifty-five-thousand-square-foot institution stretches over six acres and will commemorate the town’s anniversary with the exhibition The Art of Fredericksburg: 175 Years.

A covey of local boutiques beckon from South Lincoln, just off Main Street. I peruse the romantic antiques and fine bed linens at Carol Hicks Bolton before lunching next door at Woerner Warehouse Cafe, where Jamie Luckey and her business partner, Angela Mancino, serve up fresh-fired pizzas, bagel sandwiches, and loaded avocado toasts in what was once the town’s feed store. Across the street, Jill Elliott runs Blackchalk Home and Laundry, one of Fredericksburg’s most charming home and gift boutiques, where she stocks eclectic furniture and original artwork, like Virginia-born artist Dolan Geiman’s paper collages of sugar skull cowgirls. Elliott and her husband recently opened Ololo, a bed-and-breakfast with four casitas furnished with Moroccan wedding blankets, Kenyan wall hangings, and other objects her family has collected in their travels.

New businesses like these bring a contemporary flair to town but are balanced by its older, traditional institutions. I could spend a whole afternoon at Der Küchen Laden, with its wall of springerle cookie molds and other culinary treasures. The same goes for Kuckuck’s Nest, where Paula Kager, from western Germany, sells authentic lederhosen, dirndls, beer steins, and an impressive collection of Black Forest cuckoo clocks.

Come spring, no Fredericksburg weekend would be complete without taking in the Hill Country’s wildflowers, on the way to another of the area’s big draws—wine. As winter thaws, the roadsides transform into kaleidoscopic carpets of Pinklady primroses, purple wine-cups, and bluebonnets. On the outskirts of town, butterflies fan their wings over yellow and tangerine cosmos at Wildseed Farms. Founder and president John Thomas has built the largest working wildflower farm in the world. “Our motto is ‘Come for the flowers and stay for the atmosphere,’” he tells me as we walk amid its more than two hundred acres of fields, winding trails, and butterfly gardens. In May, the Thomas family will release the first wines from Wildseed Farms Vineyards and serve them in a recently expanded tasting room. Before leaving, I grab a sack of wildflower seeds from the gift shop and dream of spring.

The Texas Hill Country is the second most visited wine region in the nation, behind Napa Valley. Richard Becker of Becker Vineyards was one of the early pioneers and is often called the Robert Mondavi of the region. In fact, he was friends with the late California winemaker, and they had an appreciation for each other’s vintages. Visiting Becker’s vineyard feels like stepping back in time thanks to two restored historic farmhouses. “We try to make it feel like you are at a German property in the nineteenth century,” he says.

Three miles from Becker, on the drive back to downtown, I stop into Signor Vineyards, which feels more like a French garden than a Texas winery, with its wisteria trellises and rambling rosebushes. The Signor family’s history in the state dates back more than a century, and this year, they will root themselves even deeper by breaking ground on forty rooms at the vineyard for overnight guests. In the sun-dappled courtyard, I swirl a glass of pinot gris as the sun sets over a sea of vines.

Back in town, I meet John and Evelyn Washburne for dinner at Otto’s, where a menu of braided pretzels, duck schnitzel, and apple strudel upholds German tradition. The Washburne family owns a number of establishments here, including La Bergerie, a wine, cheese, and charcuterie market, and the Hoffman Haus bed-and-breakfast. “One of the best things about Fredericksburg is how inviting everyone is,” Evelyn says. She should know—she grew up here and has watched countless people, including her husband and his family, relocate from cities like Dallas and Houston. As John puts it over a Flammkuchen flatbread with smoked salmon, “We’re seeing a renaissance of people reassessing their priorities.”

The end of a festive weekend requires a hearty send-off and perhaps some local music. Trek just a bit outside of town for the Sunday brunch and jams at Hill Top Cafe, a forty-year-old, neon-lit watering hole owned by musician Johnny Nicholas of the Grammy-winning band Asleep at the Wheel. Downtown, find more Texas tunes along with ice-cold margaritas and juicy cheeseburgers at Hondo’s on Main, named after Hondo Crouch, the writer, humorist, and self-proclaimed mayor of (nearby) Luckenbach, whose daughter owns the joint.

I cap off the weekend at the stunning Enchanted Rock, the largest pink monadnock in the nation, laden with Native American lore. At the dome’s 425-foot summit, I catch my breath and marvel at 360-degree views of sagebrush and wild prairie. Enchanting indeed. I think of Fredericksburg’s delicate dance of old and new, its grafted grapevines and flower-strewn roads, its clean country air and carved cuckoo clocks. Soon enough, my yearlong sabbatical will ticktock to a close, but who knows? Maybe I’ll stay a little longer.

Home Videos The WORLD of WINE – Wine News. Cheap wine, tasting notes and cooking with wine The World of Wine – May 2021 … END_OF_DOCUMENT_TOKEN_TO_BE_REPLACED

How to visit Napa Valley on a Budget. In this video Carson and I explain a few ways to enjoy Napa on the cheap. Tip and advice about how to visit Napa … END_OF_DOCUMENT_TOKEN_TO_BE_REPLACED

Home Videos Get To Know Argentina Wine | Wine Folly If you love Malbec, Argentina is your ultimate wine region. But that’s not … END_OF_DOCUMENT_TOKEN_TO_BE_REPLACED