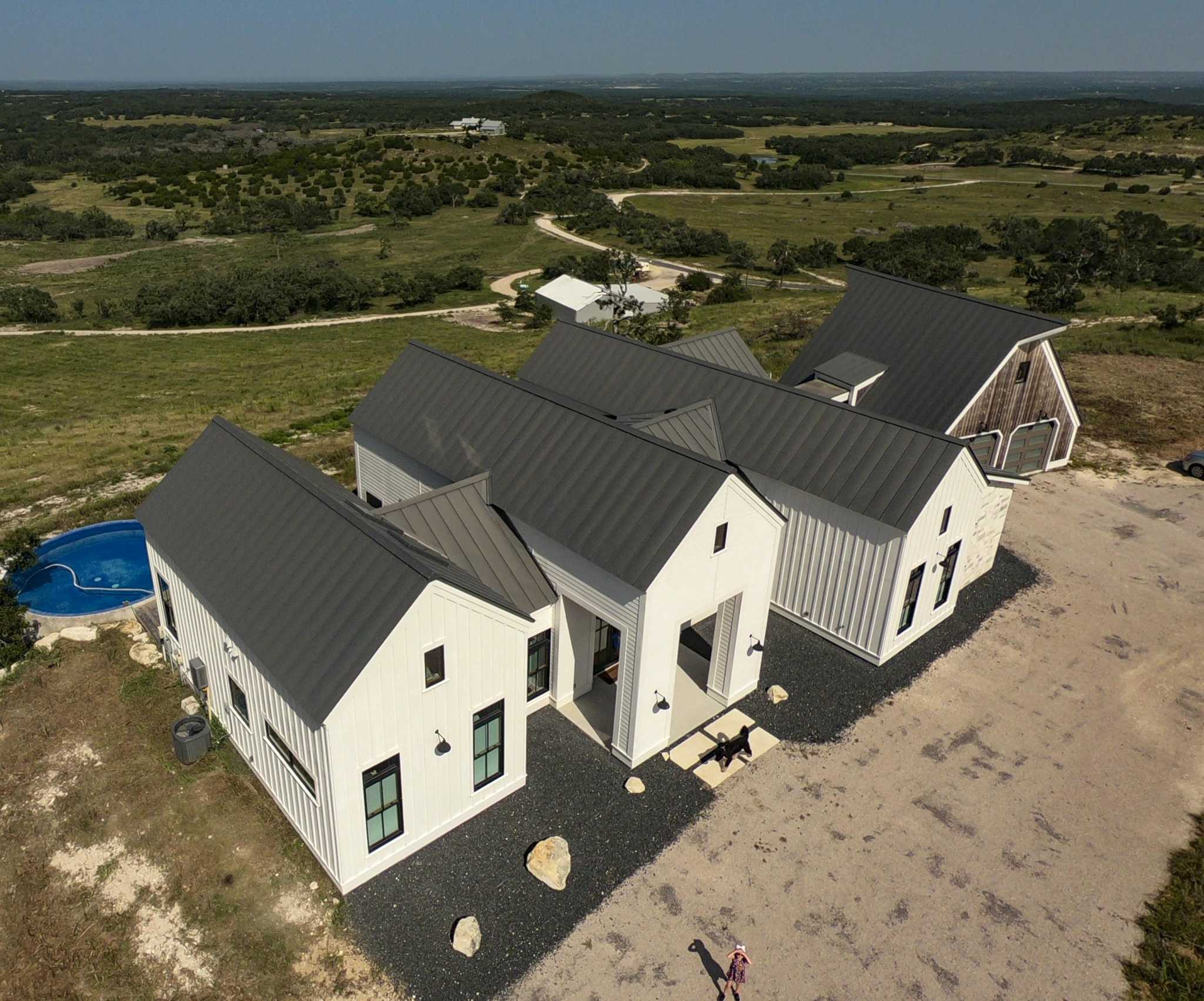 When winemakers Regan Meador and his wife Carey decided to build their forever home in Gillespie County not far from Fredericksburg, they never considered doing so anywhere else but on the grounds of their 62-acre vineyard, Southold Farm + Cellar.

Completed in 2019, the four-bedroom, 3 ½-bathroom house is just a short walk from the winery’s hilltop tasting room and within sight of the production building at the bottom of the hill.

The 2,800-square-foot home, which cost about $650,000 to build. Sited on the hill’s eastern slope, the home has a spectacular view out over the Hill Country.

“At night we can see the lights all the way from Johnson City,” Carey said.

But the view wasn’t the only reason the couple, who have two children ages 6 and 8, decided to build their new home on the vineyard property.

“We like the idea that the kids would grow up on a working farm,” Regan said. “And because so much goes into farming and making wine on our site, we also wanted to live nearby to be able to work it.”

One might expect a winemaker’s home would to be decorated with corks; dark, heavy Italian furniture; and wine-inspired art. Instead, the house is white, bright and airy, and the only reference to how the Meadors make their living is the partial living room wall made from used barrel staves fitted together in a chevron pattern.

“There’s a little bit of nuance there,” Regan said. “It’s not like we have wine barrels all over the house.”

They didn’t even build a cellar in the house. Instead they keep a reasonable selection of bottles in a pair of wine coolers in the kitchen pantry and run down to the production building if they need something special, according to Regan.

During planning, the couple, both 41, told architect Tim Brown they wanted the house to make maximum use of its interior space. That meant as few hallways as possible without settling for the default open-plan design.

Brown’s solution is a layout in which many of the individual living spaces are demarcated visually, with partial walls and ceilings of different heights.

The home’s most dramatic space, the combination living and dining area, runs 40 feet from the front entryway to the massive windows in the back. Above, a cathedral ceiling made from rich, golden Douglas fir rises 23 feet and gives the room something of a Scandinavian feel.

The couple say the plan initially was to run a large support beam down the middle of the ceiling and several cross beams perpendicular to that. They changed their minds during construction, however.

“We liked the cleaner look without all those beams,” Carey said.

On ExpressNews.com: Townhouse’s challenging top floor gets a redo for entertaining, lounge space

With its soaring ceiling and large windows letting in plenty of eastern light, the room would seem the perfect spot to watch the sunrise while enjoying the morning’s first cup of coffee.

“I wish,” said Carey with a laugh. “Our kids are 6 and 8, did we mention that? We’re more interested in getting them to finish their cereal and getting them out the door in the morning.”

Another of the home’s simple design elements is the concrete flooring that runs through the house, broken up by the occasional area rug.

“We had wood floors in our old house on Long Island, and they quickly got pretty scraped up,” Carey said. “We also like the look of concrete. The only thing we had them do was to add some gray dye to the pour to make it a little darker.” 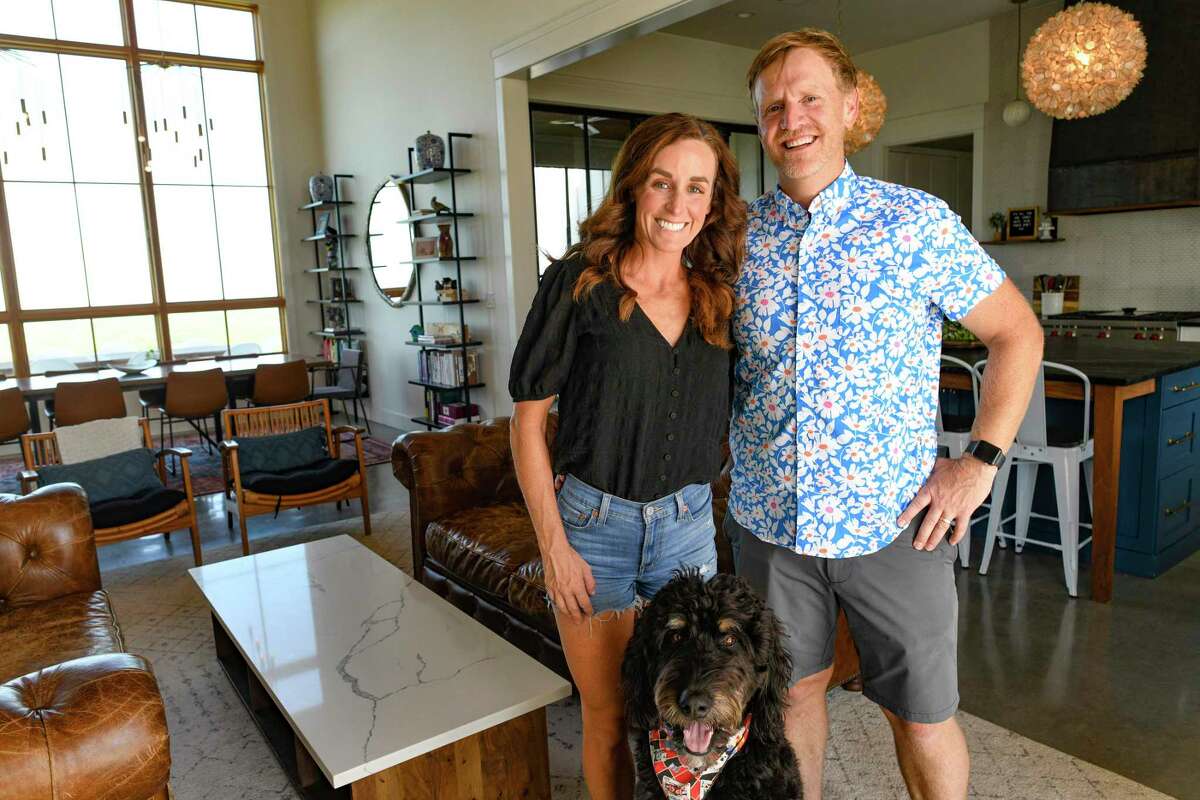 Carey, left, and Regan Meador built their home on their Southold Farm + Cellar vineyard property near Fredericksburg in part because they wanted their children to know what it’s like living on a working farm

The Meadors moved to Texas in 2017 after several years of making wine in Southold, New York, on Long Island’s North Fork.

In 2019 they began planting about 30 different varieties of grapes on 14 acres. While waiting for those vines to mature, they’ve been crushing grapes both from a nearby vineyard they farm and purchased from two other Texas growers. Regan is the Southold president and winemaker while Carey is the company’s board secretary. They make between 4,000 to 5,000 cases annually and hope eventually to produce estate-grown wines exclusively.

Located off the opposite side of the living/dining room, the kitchen is dominated by a large center island topped by black soapstone countertop with subtle white markings. The top extends well over the edge of the base so family and visitors can easily gather around it like a large table.

“When we entertain we’ll throw some butcher paper over the top and put cheese and other stuff out so people can graze,” Regan said. “That way, the island becomes the focal point of the party.”

Regan said they entertain every couple of weeks or so — and of course, there’s plenty of wine — but these events are usually limited to family and friends.

“If we’re entertaining for business, we’ll usually do it in the tasting room or the restaurant,” Regan said, referring to The Kitchen at Southold Farm + Cellar, which serves a New American Menu along with the killer views.

The home kitchen’s metal-clad oven hood and the tile backsplash with its delicate black-and-white pattern combine to give it a country farmhouse feel.

“I don’t love super modern vent hoods,” Carey said. “I wanted something clean but that had some interest. Same thing with the tile. We didn’t want the pattern to be overwhelming since the backsplash goes all the way up to the ceiling.”

Around the corner from the kitchen, there’s a pantry with large open shelves for storing food and small appliances.

“This was kind of a big deal for me, to have everything right here where I need it,” Carey said. “It’s hidden away, so I can have my clean kitchen countertops but still have easy access to my toaster oven.”

The master bedroom echoes the living/dining room, with the same Douglas fir cathedral ceiling, albeit on a smaller scale. It also has the same view to the east.

“We can lay in bed and look up at the stars at night and watch meteor showers,” Regan said.

“And then we can watch the sun come up in the morning,” Carey added.

If there’s one place in the house where the couple got bit playful, it’s the master bathroom floor, which shocks with green tiles in a wild geometric pattern. The tile also runs up one of the shower walls.

“Our last house had those classic black and white hex tiles,” Carey said. “So we wanted to do something different. People who’ve seen it have been like, ‘But what if you want to sell?’ And we’re like, ‘We’re probably not gonna be selling this house for a while.’”

After all, it’s the perfect live-work space for them.

Home Videos The WORLD of WINE – Wine News. Cheap wine, tasting notes and cooking with wine The World of Wine – May 2021 … END_OF_DOCUMENT_TOKEN_TO_BE_REPLACED

How to visit Napa Valley on a Budget. In this video Carson and I explain a few ways to enjoy Napa on the cheap. Tip and advice about how to visit Napa … END_OF_DOCUMENT_TOKEN_TO_BE_REPLACED

Home Videos Get To Know Argentina Wine | Wine Folly If you love Malbec, Argentina is your ultimate wine region. But that’s not … END_OF_DOCUMENT_TOKEN_TO_BE_REPLACED