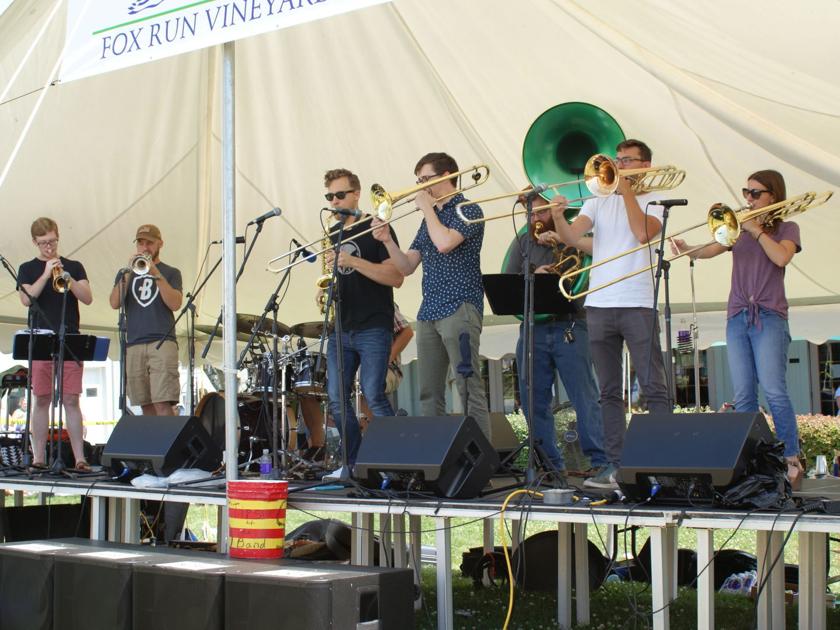 GENEVA — Dave Bunnell said Fox Run Vineyards’ Glorious Garlic Fest has been a huge draw to the Finger Lakes region, but he gushes at the possibilities of what it can be with its move to the Geneva lakefront next August.

“It’s a really big deal,” said Bunnell, a member of the Geneva Business Improvement District board, which announced on Tuesday it would be taking on the festival — canceled because of the pandemic this year and last — in 2022.

With festivals such as the Atlanta Food and Wine Festival, the Santa Fe Wine and Chile Fest, and the Food and Wine Classic in Aspen becoming national draws, Geneva has a chance to do the same for the Garlic Festival, Bunnell believes.

After all, this festival is in one of the nation’s most visited wine regions, he said.

“I think we’ve got a similar opportunity here,” he said. “I’m extremely excited.”

Fox Run co-owner Scott Osborn — he owns the winery with his wife, Ruth — said it was time the growing winery find a new place for the festival, which started in 1993, the year he began transitioning to ownership of the Yates County winery.

“It kept getting bigger,” said Osborn.

So much bigger that there was nary a parking space left on the Fox Run grounds, he said.

The move to Lakefront Park in 2022 addresses the parking issue and allows for future growth, he said.

“I think it’s going to be good for everybody,” said Osborn, who noted that while BID is taking over the operation, Fox Run will remain part of the event’s planning. “It’s good for Geneva, it’s good for the region. And it’s a lot less stress for us.”

He said BID Director Michael Mills, who worked on the Atlanta Food and Wine Festival while living there, is the perfect guy to take over the event and help it grow.

Osborn, who is friends with Bunnell, a local business owner whose properties including Plum Point Lodge, said he mentioned that he was hoping to find a new spot for the festival. Bunnell brought the idea to BID’s board of directors.

Mills said the board gave the idea its full support and that the small agency, which supports downtown businesses, is equipped to handle such events.

“We wouldn’t have taken it on if we didn’t have the confidence to do so,” he said. “We know the challenges. We have reverence for the event.”

BID said a transfer agreement is in place that will pass ownership of the festival to the BID, but that Fox Run Vineyards will continue to be an “integral planning partner and participant” for the foreseeable future.

The two-day festival celebrates the harvest of garlic and includes a Thursday outdoor concert to kick off the weekend. The event features, garlic-flavored food, regional garlic farmers and tips from Finger Lakes chefs through garlic cooking demonstrations. Fox Run’s wines will be featured at the new festival, but Osborn said the transfer of the festival to BID will allow other wineries and beverage producers to participate.

Mills said BID envisions the festival becoming a week-long celebration of garlic and downtown. He notes that the lakefront is in the Business Improvement District.

“Downtown Geneva has a once-in-a-lifetime opportunity to build upon nearly 30 years of success with this festival to continue enhancing our reputation as a culinary and cultural destination within the Finger Lakes region,” said Mills, who expressed appreciation for Bunnell for bringing the idea to the agency.

City Manager Sage Gerling said the move of the popular festival is a win for Geneva.

“The city of Geneva is honored to be the new home for the acclaimed Glorious Garlic Festival,” said Gerling. “This festival has been a long-running tradition that brings new and returning visitors to the Finger Lakes annually and we are excited to add Geneva’s unique lakefront and downtown landscape to the recipe.”

Home Videos The WORLD of WINE – Wine News. Cheap wine, tasting notes and cooking with wine The World of Wine – May 2021 … END_OF_DOCUMENT_TOKEN_TO_BE_REPLACED

How to visit Napa Valley on a Budget. In this video Carson and I explain a few ways to enjoy Napa on the cheap. Tip and advice about how to visit Napa … END_OF_DOCUMENT_TOKEN_TO_BE_REPLACED

Home Videos Get To Know Argentina Wine | Wine Folly If you love Malbec, Argentina is your ultimate wine region. But that’s not … END_OF_DOCUMENT_TOKEN_TO_BE_REPLACED