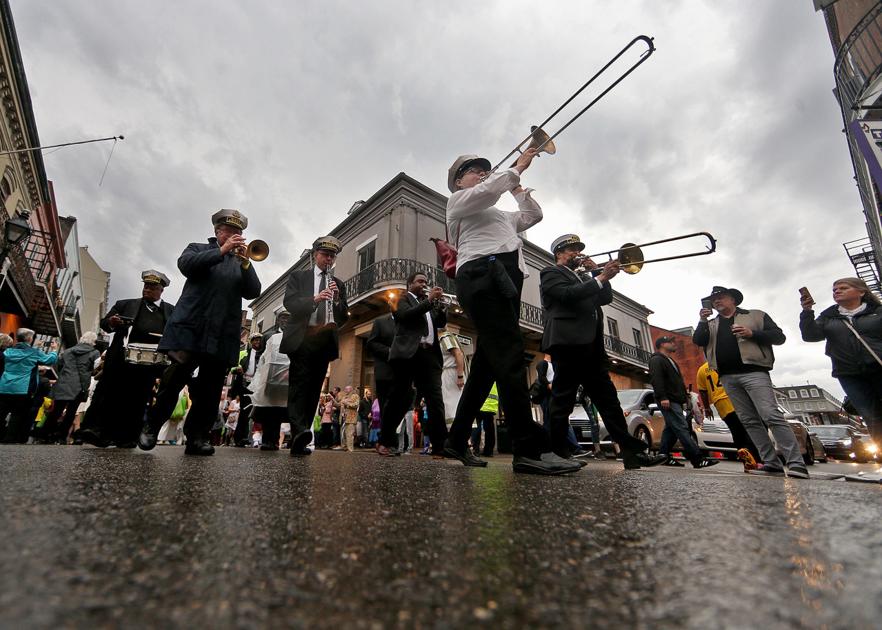 After a curtailed Carnival season and the homebound holidays, New Orleans will next experience another spring festival season laid low by the pandemic.

The New Orleans Jazz and Heritage Festival and French Quarter Fest are both rescheduled for the fall and Essence, usually a high point of the summer calendar, will be a virtual event for the second year in a row.

Between these marquee events, the spring calendar is also peppered with smaller festivals, including many food and drink events. March is when this all usually gets rolling.

Most have been called off yet again, facing the risk of coronavirus spread and the uncertainty of planning week to week, never mind months in advance.

But at least two are moving forward with plans heavily tailored to the times.

The New Orleans Wine & Food Experience plans to hold its annual event June 9-13, modified for coronavirus safety protocols. Greek Festival, another local mainstay of the spring event calendar, is carrying on with a series of drive-thru events for its specialty foods, with one on March 20 and another on Memorial Day weekend, the date for its traditional festival (see details below).

Festivals and fairs are on the city’s “not allowed” list, along with second-lines and parades, concert halls and dance clubs. These events are taking shape in different forms from the traditional festival gathering.

For others that would normally be on the horizon, the future path remains uncertain.

Peering ahead to plan

One of those is Hogs for the Cause. Normally held in March, the festival part of Hogs for the Cause is the biggest public manifestation of this fundraising organization, which supports families dealing with pediatric brain cancer.

Co-founder Becker Hall confirmed Hogs for the Cause is not planning any event in March, and said the group continues to assess options for a future event. In the meantime, fundraising continues through the group’s online platform, which last year added a new campaign encouraging individuals and teams to hold their own smaller fundraisers for the overall cause.

New Orleans Bourbon Festival, an event built around the burgeoning interest in its namesake whiskey, was one of the first events to fold last year. Organizers had four days of seminars, tastings, dinners and other bourbon-themed events lined up last March, but less than 24 hours from its scheduled start it all had to be shut down.

Founder Tracy Napolitano is now working to bring Bourbon Festival back to New Orleans sometime near the end of August.

He and the event’s partners are discussing possibilities for the format, including a hybrid idea, mixing in-person tastings with virtual components. At this point, though, just what the city and state will allow by late summer is still the big question, and that means all options are on the table.

“The problem is we just don’t know what we’ll be allowed to do,” Napolitano said. “I’d love to keep it in Louisiana, but if we’re not allowed to do it here, we’ll have to move.”

Top Taco is in a similar situation. Called off just a week before its fourth annual edition last March, this giant taco and tequila party could return sometime in the fall. But, like Bourbon Festival, the scheduling dilemma in pandemic times is clouding its future.

“We’re trying to figure out what’s possible for the fall, but it’s hard to plan now when you don’t know what will be feasible later,” said Top Taco founder Shane Finkelstein. “If I can’t do it the right way, I won’t do it at all, though.”

While the event has always been held on the New Orleans riverfront, he’s now looking at alternative venues, including Lafreniere Park in Metairie.

For NOWFE and Greek Fest, planning events in the weeks and months ahead means recasting what the festivals look like and working flexibility into the plans.

NOWFE was technically postponed last year as the coronavirus emerged; it was not officially called off. As 2020 played out, organizers found different ways to bring back some of its features, including wine dinners at restaurants and a seated wine tasting. NOWFE executive director Aimee Brown says that experience is guiding this year’s events.

“We’ve done more than 45 events with restaurants and hotels in the past year and we’ve learned a lot from them,” she said. “They know how to do these things safely. That’s why they’re great partners.”

This year’s event will unfold over five days, June 9-13, including seminars and specialty food and drink “experiences,” which are normally presented in small groups, and also including wine tastings and festive meals.

Ticket sales will be set by occupancy rules for the various venues, and Brown said the available tickets will be much more limited than in past years.

The Royal Street Stroll, usually the most freewheeling of NOWFE events, won’t happen this year. Other familiar features will return though, including the Grand Tastings and the higher-end Vinola tasting; the Tournament of Rosés, a rosé themed tasting; and the Burlesque, Bubbly & Brunch event.

Grand Tastings and Vinola are normally “walk around” events, where people stroll between tables to sample different wines. That is the plan for this year too, with smaller groups and staggered start times. Depending on local rules and protocols in place at the time of the event, the tastings could shift to seated events.

“We know this is a fluid situation. We want to keep as much of the traditional NOWFE events that we can offer safely, and we’re working with all partners to make sure we can do that,” Brown said.

Recognizing that many restaurants face sharp hardships in the pandemic, Brown said the group will pay restaurants that take part to defray expenses.

For many years, NOWFE was held around Memorial Day weekend, but the event date has shifted over the past few years (it was scheduled for March in 2020, just before the pandemic arrived). Now, NOWFE is looking to June as the permanent time frame for the event, and it has already staked out June 2022 for the next edition.

Brown said moving away from Memorial Day led to much higher participation by wineries. This year, she said, it also gives more time for pandemic conditions and the corresponding protocols to change. For NOWFE event details and ticket information, see nowfe.com.

Traditional Greek food is a centerpiece of Greek Fest, which normally draws crowds to the Holy Trinity Greek Orthodox Cathedral along Bayou St. John each Memorial Day. In December, Greek Festival organizers held a drive-thru Winter Greek Feast for people to pick up pre-ordered packages of baked goods at the church. They have two more scheduled — Spring Greek Feast on March 20; and Greek Feast, a Tribute to Greek Fest, on May 29.

For the March event, home cooks and the teams that normally prepare festival specialties will serve take-and-bake portions of lamb shank and moussaka, plus Greek pizzas, soups, salads, wraps and dips, and the festivals signature assortment of desserts and baked goods.

The deadline for pre-orders for the March 20 drive-thru event is March 7. See menus and details at holytrinitycathedral.org.

Vickie Catsulis, chairwoman of Spring Greek Feast, said the experience of the December event encouraged the church community to continue the format.

“People were so grateful and so generous,” she said. “I think people are hungry for this, for the experience. We are too. We want to cook for people, and this offers a safe way to do it.”

The Greek Feast in May will feature a broader array of traditional dishes. Catsulis said organizers are considering holding a full version of Greek Fest in November — with music and dancing and ouzo — provided local protocols allow large gatherings by then.

The Greek Feast events, however, may continue as an annual part of the church’s event calendar, with different seasonal Greek foods showcased at each one.

“It could be one of those things to come out of the pandemic,” she said. “If it works, we could keep doing it.”

Café Reconcile has red beans and rice on Mondays and seafood on Fridays. It has regulars who visit weekly. Sometimes the restaurant is slow, s…

The parade was one of the first events canceled in 2020.

The Lenten fish fry is a tradition robustly upheld around the New Orleans area, and that continues in 2021 with some modifications and more dr…

Home Videos The WORLD of WINE – Wine News. Cheap wine, tasting notes and cooking with wine The World of Wine – May 2021 … END_OF_DOCUMENT_TOKEN_TO_BE_REPLACED

How to visit Napa Valley on a Budget. In this video Carson and I explain a few ways to enjoy Napa on the cheap. Tip and advice about how to visit Napa … END_OF_DOCUMENT_TOKEN_TO_BE_REPLACED

Home Videos Get To Know Argentina Wine | Wine Folly If you love Malbec, Argentina is your ultimate wine region. But that’s not … END_OF_DOCUMENT_TOKEN_TO_BE_REPLACED