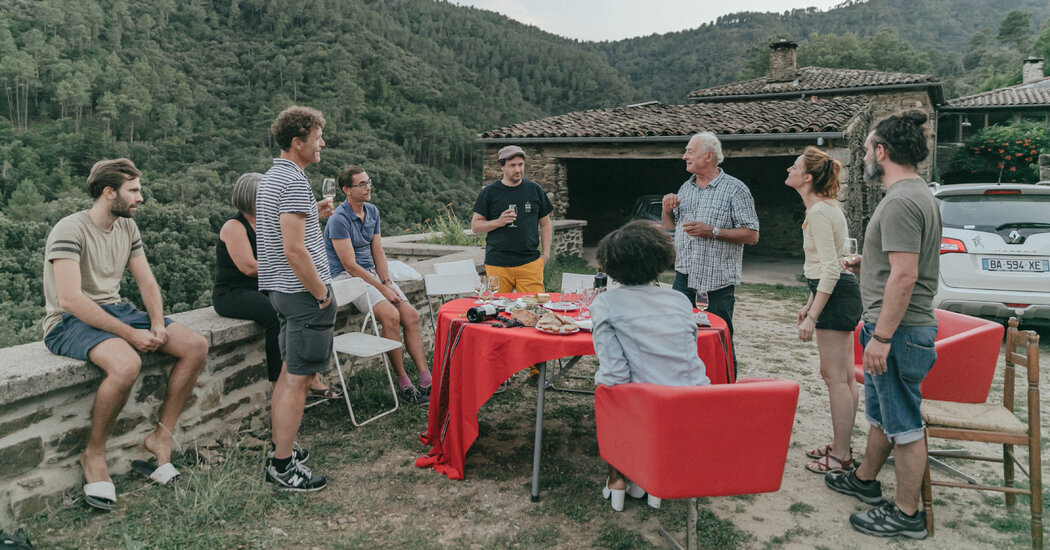 BEAUMONT, France — The vines were once demonized for causing madness and blindness, and had been banned decades ago. The French authorities, brandishing money and sanctions, nearly wiped them out.

But there they were. On a hillside off a winding mountain road in a lost corner of southern France, the forbidden crop was thriving. Early one recent evening, Hervé Garnier inspected his field with relief.

In a year when an April frost and disease have decimated France’s overall wine production, Mr. Garnier’s grapes — an American hybrid variety named jacquez, banned by the French government since 1934 — were already turning red. Barring an early-autumn cold snap, all was on track for a new vintage.

“There’s really no reason for its prohibition,” Mr. Garnier said. “Prohibited? I’d like to understand why, especially when you see the prohibition rests on nothing.”

Mr. Garnier is one of the last stragglers in a long-running struggle against the French wine establishment and its allies in Paris. The French government has tried to rip the jacquez and five other American vine varieties out of French soil for the past 87 years, arguing that they are bad for human physical and mental health — and produce bad wine.

But in recent years, the hardiness of the American varieties has given a lift to guerrilla winemakers like him, as climate change wreaks havoc on vineyards across Europe and natural wines made without the use of pesticides have grown in popularity.

Despite France’s pledge in 2008 to halve the use of pesticides, it has continued to rise in the past decade. Vineyards occupied just over 4 percent of France’s agricultural area but used 15 percent of all pesticides nationwide in 2019, according to the Agriculture Ministry.

“These vines ensure bountiful harvests, without irrigation, without fertilizers and without treatment,” said Christian Sunt, a member of Forgotten Fruits, a group fighting for the legalization of the American grapes. Showing off forbidden vines, including the clinton and isabelle varieties, on a property in the southern Cévennes region, near the town of Anduze, he added, “These vines are ideal for making natural wine.”

American grapes have long played a central role in the tumultuous, and emotional, history of wine between France and the United States — alternately threatening French production, and reviving it.

It all started in the mid-1800s when vines native to the United States were brought over to Europe, with a piggybacking louse known as phylloxera. While the American vines were resistant to the pest, their European counterparts did not stand a chance. The ravenous lice attacked their roots, choking off the flow of nutrients to the rest of the plant — and causing the biggest crisis in the history of French wine.

The lice destroyed millions of acres, shut down vineyards and sent jobless French to Algeria, a French colony.

After a quarter-century of helplessly watching the collapse of Europe’s traditional wine culture, the wine world’s best minds had an epiphany. The cure was in the poison: the American vines.

Some vintners grafted the European vines onto the resistant American rootstocks. Others crossbred American and European vines, producing what became known as the American hybrids, like the jacquez.

“That left an impression to this day,” said Thierry Lacombe, an ampelographer, or vine expert, who teaches at Montpellier SupAgro, a French university specializing in agriculture. “It wasn’t the only time that the Americans, our American friends, came to save the French.”

The French wine world split between supporters of grafting and hybrid grapes.

Still, the American hybrids thrived all over France. Sturdier and easier to grow, they were especially popular in rural areas like the Cévennes. Families planted them on hillsides where other crops were impossible to grow. They let them grow on top of arbors, cultivating potatoes underneath, as a way to make productive every inch of land. Villagers harvested and made wine together, using a common cellar.

If pinot noir is part of Burgundy’s identity, the jacquez became part of the folklore of the northern Cévennes, including the village of Beaumont.

And in the southern Cévennes, the clinton (pronounced clain-ton) reigned.

“Here, if you serve a glass of clinton at any bar, people will pounce on it,” said Mr. Sunt, 70, a retired forest ranger. “If the clinton became legal again, I can tell you that if a winemaker wrote clinton on his bottle, he’d sell 10 times more than if he wrote syrah or cabernet sauvignon.”

Today, the American varieties make up only a tiny percentage of all French wine. But with grafting and the hybrids, production boomed across the land in the early part of last century. Algeria also become a major wine exporter to metropolitan France.

With France awash in wine, lawmakers urgently addressed the problem around Christmas in 1934. To reduce overproduction, they outlawed the six American vines — including hybrids like the jacquez and pure American grapes like the isabelle — mainly on the grounds that they produced poor wine. Production for private consumption would be tolerated, but not for commercial sale.

The government had planned to follow up with bans on other hybrids but stopped because of the backlash to the initial ban, Mr. Lacombe said. Then the war provided another reprieve.

It was only in the 1950s — when hybrids were still cultivated on a third of all French vineyards — that the government really began cracking down on the six forbidden grapes, Mr. Lacombe said. It offered incentives to rip out the offending vines, then threatened growers with fines.

It then condemned the American grapes as harmful to body and sanity with arguments “not completely honest to try to quell a situation that was slipping away from the government,” Mr. Lacombe said.

“In fact, the present defenders of these vines are right in underlining all the historical and government inconsistencies,” he added.

The clinton and jacquez might have met a quiet death if not for a back-to-the-land movement that, starting in the 1970s, brought people like Mr. Garnier to the Cévennes.

Originally from northeastern France, Mr. Garnier, now 68, was once a longhaired high school student who traveled to see Jimi Hendrix, The Who and Janis Joplin perform in concert. Half a century later, he cheerfully recalls how he avoided mandatory military service after only seven hours on a base during which he asked to see a psychologist, refused to eat with others and was generally annoying.

A week after his discharge, aimless hitchhiking brought him in 1973 to the village of Beaumont in the Cévennes where he immediately decided to buy an abandoned property — paying it off mostly by repairing roofs in the region and elsewhere.

Some years later, he got into winemaking almost by accident. Two elderly brothers asked him to harvest their jacquez grapes in return for half of the wine production. He learned the history of the forbidden vines and eventually bought the brothers’ vineyards.

Today, he makes 3,400 bottles a year of his deeply colored, fruity “Cuvée des vignes d’antan,” or wine from vines of yesteryear. He got around the ban by creating a cultural, noncommercial association, “Memory of the Vine.” A membership fee of 10 euros, or about $12, yields a bottle.

With the growing threat of climate change and the backlash against the use of pesticides, Mr. Garnier is hoping that the forbidden grapes will be legalized and that France’s wine industry will open up to a new generation of hybrids — as Germany, Switzerland and other European nations already have.

“France is a great wine country,” he said. “To remain one, we have to open up. We can’t get stuck on what we already know.”

Home Videos The WORLD of WINE – Wine News. Cheap wine, tasting notes and cooking with wine The World of Wine – May 2021 … END_OF_DOCUMENT_TOKEN_TO_BE_REPLACED

How to visit Napa Valley on a Budget. In this video Carson and I explain a few ways to enjoy Napa on the cheap. Tip and advice about how to visit Napa … END_OF_DOCUMENT_TOKEN_TO_BE_REPLACED

Home Videos Get To Know Argentina Wine | Wine Folly If you love Malbec, Argentina is your ultimate wine region. But that’s not … END_OF_DOCUMENT_TOKEN_TO_BE_REPLACED