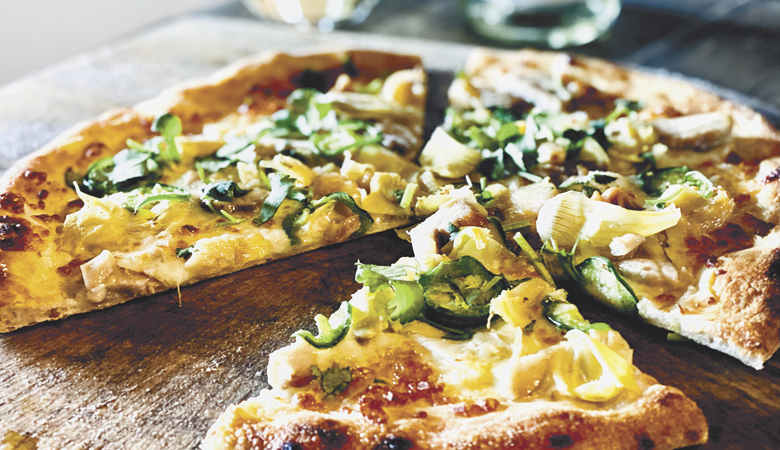 Land plus climate equals wine destiny. Together, these geographical qualities determine which grapes flourish and which struggle. However, while most Oregon winemakers appreciate their dependable regional varieties such as Pinot Noir and Chardonnay, they’re still captive to a sense of curiosity and exploration, unable to resist experimenting with the occasional obscure grape.

Enter Tocai Friulano, a grape long cultivated in Friuli-Venezia Giulia, Italy’s northeastern-most wine region. The first point made in any literature on this varietal emphasizes that it’s not to be confused with the Hungarian wine region of Tokaj or its wines called Tokay or Tokaji. This ambiguity has resulted in European labeling regulations that don’t apply in the U.S.

A few adventurous winemakers in Oregon are producing Tocai Friulano in limited quantities. Cooper Mountain Vineyards and Furioso Vineyards shared their experiences with the challenges and rewards of diving into production with this locally unproven grape. We also spoke with Chef Jody Kropf, owner of Red Hills Market, Kitchen & Catering in Dundee and McMinnville, who appreciates Tocai Friulano for its unique pairing merits.

Winemaker Dominique Mahé of Furioso Vineyards recalls how owner Giorgio Furioso enjoyed Tocai Friulano at a 2014 dinner with the Mondavis in Napa, where everyone raved about it. His team concluded it would thrive at the very top of their new Yamhill site, Trovato Vineyard — named after Furioso’s mother — where they planted less than an acre at about 680 feet. “That varietal is fairly unknown here in Oregon; I know of two other growers, so it’s a unique grape in that way,” Mahé said. Cooper Mountain Vineyards bought cuttings for the wine in California. Co-owner Barbara Gross recalls how wine pioneer David Adelsheim demonstrated its viability in Oregon as an early grower of the grape, and that it’s “an esoteric grape; nobody really knows what it is. It’s a little geeky.” At Cooper Mountain, they planted 2.5 acres in 2004, for a first vintage in 2008. “We always sort of laugh about this. Adelsheim took it out right around the year we had our first vintage. He was too pioneering in that moment of time. The world wasn’t ready to look at esoteric wines yet.”

Both wineries encountered challenges growing the grape. “The grape wants to grow; it wants to give eight to 10 tons to the acre, but we have to thin it to two, two-and-a-half tons per acre, and even then it struggles to ripen,” Gross explained. “It’s always late, always the last one we bring in.”

Mahé concurred, “It’s a very vigorous vine; we have to control its vigor. The first year, the canes were very big and long and tall, and the clusters are really big like Gamay style, really long clusters with big berries. It’s challenging to grow because it’s susceptible to disease, to rot. Talking to the other producers, they have same kind of issues.”

“What’s interesting is that you research the literature, and Tocai Friulano is described as a high acid wine, but that’s never been the case for us,” Mahé said. “We find the grapes really struggle to achieve what you would consider optimal ripeness. Sugar seems to stop accumulating early; we can’t grow to 22 [or even] 21 Brix. We’re always picking the Friulano at much lower sugar levels, about 18 Brix.” Yet counter-intuitively, while Chardonnay picked at 18 Brix delivers high acidity, Furioso Vineyards doesn’t have that experience with Tocai Friulano. “Low Brix and low acidity is a very unusual situation, but this is what we deal with regarding our Friulano,” Mahé explained. Tocai Friulano, a cousin of Sauvignon Blanc, is also known as Sauvignon Vert and Sauvignonasse. It is generally known for being lean, dry and aromatic with vigorous acidity. How do our local versions compare to these expectations?

Gross confirms their Tocai Friulano shares some characteristics with Sauvignon Blanc, suggesting grassy and herbaceous qualities, along with weight and complexity reminiscent of — but milder than — Chardonnay. Peach and cool honeydew prevail along with “mineral on the nose, a nice crisp finish and acid,” Gross noted. “It’s crisp and acidic enough to appeal to wine geeks, with cool, fun flavors that appeal to entry-level wine drinkers. Fun and easy. I like to call it a drinker and not a thinker.”

Mahé observes how the Furioso Tocai Friulano turns out “very aromatic,” which he considers surprising. “I don’t expect a wine so highly aromatic with such a low Brix at harvest. [The wine is] very intense, with tropical notes of lychee and guava. What I like is how it has a nice body to it, like Viognier, a nice oily, rich feeling in the mouth. It’s a bone-dry white wine, so there’s no residual sugar left. We can’t achieve a high level of acidity, so it’s fairly mellow.”

For pairing notes, we turned to Chef Jody Kropf, who admires Tocai Friulano for being “food-friendly because of its depth, crispness and body, with a unique ability to pair with difficult vegetables like asparagus and the charred flavor of wood-fired foods. Tocai Friulano is an extremely versatile food-pairing wine that is surprisingly complex while being light and refreshing.”

He suggests “foods that benefit from a little acidity pair great with its brightness,” especially “smoked or roasted foods, and those with a nice fat balance” such as mortadella, Vietnamese meatballs, Idiazabal cheese, garlic roasted in olive oil, and smoked chicken thighs. “Being one of few wines that pair well with green vegetables, fire-roasted artichokes and charred asparagus are also great options,” Kropf shared.

He also proposes “seafoods with a little fat or creamy texture, like grilled sea scallops, salmon or butter confit prawns. I would encourage fat (butter), smoke or fire char with any seafood to highlight the lively acidity and minerality of this wine pairing.”

Gross echoes the seafood recommendation, specifically shellfish. “It’s a match made in heaven. Clams, mussels, all the Northwest oysters, their sweet, briny flavors match with the wine and certainly with the acid levels.” She nearly swoons recalling pairing Cooper Mountain Vineyards Tocai Friulano with Hama Hama oysters from the Hood Canal.

Mahé also proposes seafood, noting the wine’s origins in northeast Italy, near Slovenia and the Adriatic Sea. “People there pair it with white fish, especially when it’s grilled and with some acidity such as lemon and caper sauce.” He also notes its ability to complement notoriously difficult vegetables such as broccoli and asparagus.

Lastly, Mahé suggests sharp aged cheddar such as 10-year-old Tillamook. “The sharpness of the cheddar balances out and adds to the low acid and mellowness of the wine.”

If your curiosity is piqued by this esoteric Italian grape, a labor of love at just a couple Oregon wineries, find a bottle of Tocai Friulano and pair it with a recipe from Chef Kropf at Red Hills.

“Though I rarely pair white wine with pizza,” says Chef Jody Kropf of Red Hills Market, Kitchen & Catering,  “Tocai Friulano is amazing with one of my favorite wood-fired pizzas we serve at Red Hills Market. It is named for my sweet wife, Michelle. The wine behaves almost like a red with its dry fruitiness and medium-light body.”

1 head confit garlic (Peel cloves, cover in olive oil and roast in oven or on grill until soft and golden)

Note: Amounts are approximate.  Preheat oven to 475°F for 30 minutes, or an hour with a pizza stone inside.  Stretch dough into thin circle; place on parchment paper for easy transfer. Brush dough with olive oil. Scatter cheese and toppings. Place pizza, still on parchment paper, on hot stone or baking sheet.  Bake 10 to 15 minutes, until browned and bubbling.  Top with fresh cilantro and serve.

“From your first sip, you will notice Tocai Friulano wants to be alongside savory flavors such as toasted fennel spices, fennel pollen and sweet bay leaves, all of which mesh beautifully with its herbal flavor profiles,” says Kropf. “My top pairing choice is our chicken liver mousse served on crostini wood-fired with olive oil and fennel pollen. This pairing stands alone and is a simple yet beautiful snack with Friulano.”

 Slice baguette at 45-degree angle (on the bias) at about 1/8-inch thick.  Lay out on sheet pan and drizzle generously with olive oil. Sprinkle with sea salt, fennel pollen and herbes de Provence.  Bake at 375°F until golden brown or toast on grill.

Home Videos The WORLD of WINE – Wine News. Cheap wine, tasting notes and cooking with wine The World of Wine – May 2021 … END_OF_DOCUMENT_TOKEN_TO_BE_REPLACED

How to visit Napa Valley on a Budget. In this video Carson and I explain a few ways to enjoy Napa on the cheap. Tip and advice about how to visit Napa … END_OF_DOCUMENT_TOKEN_TO_BE_REPLACED

Home Videos Get To Know Argentina Wine | Wine Folly If you love Malbec, Argentina is your ultimate wine region. But that’s not … END_OF_DOCUMENT_TOKEN_TO_BE_REPLACED