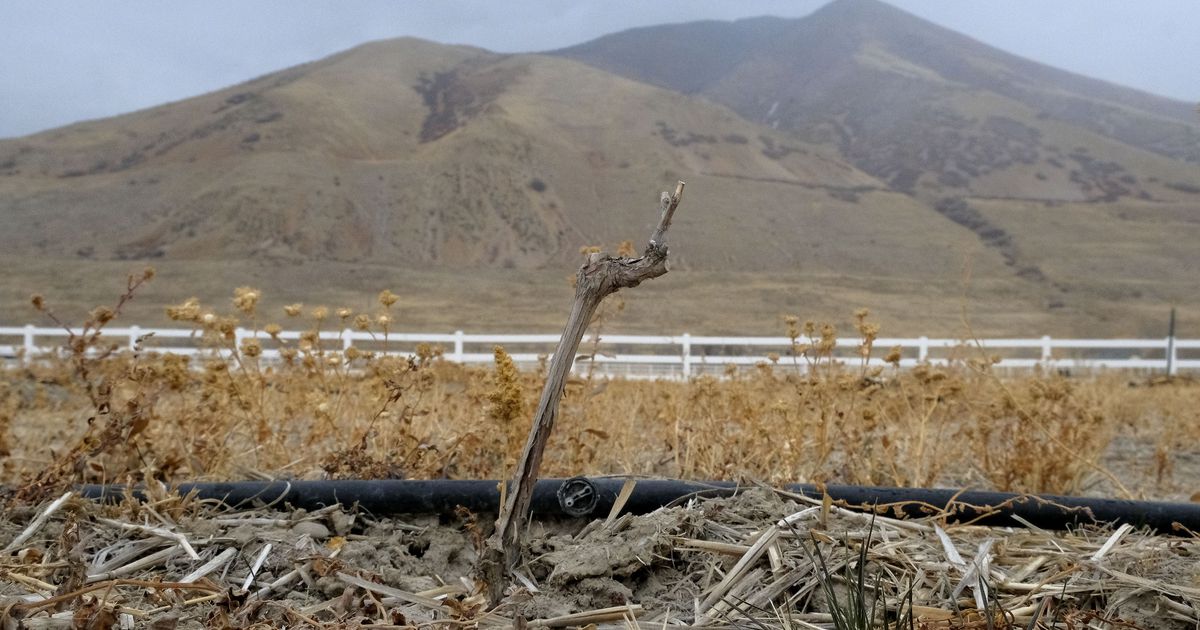 Mannebach Cellars opened in 2019 in Erda near the Oquirrh Mountains, and soon a Latter-day Saint temple will take root in the Tooele County community, too.

Erda, a tiny town in northern Utah, and La Rioja, a province in northern Spain, are 5,200 miles apart physically — and, some might say, culturally — but they share something in common:

Both sit about the same distance north of the equator near the 40th parallel. It’s a geographic strip thought to be one of the best coordinates for growing grapes and making wine.

Rioja is already one of the best known wine regions in the world, with thousands of vineyards thriving at the base of the Sierra de Cantabria Mountains.

Erda, located on the backside of the Utah’s lesser-known Oquirrh Mountains, has somewhat different credentials. The big news in this mostly rural community — with 1-acre lots for horses and family farms — is the housing boom and the soon-to-be-built three-story temple for The Church of Jesus Christ of Latter-day Saints.

It was Erda’s location, on the same latitude as Spain’s famed wine region — along with a few others factors like the soil and elevation — that intrigued Steve and Meredith Mannebach, and led them to buy 5 acres, build a home and launch Mannebach Cellars.

The boutique winery opened in 2019 and is believed to be Tooele County’s first licensed winery. (It’s hard to say what folks were making in the root cellar before or during Prohibition.)

To get their winery off the ground, the Mannebachs bought bulk wines from Washington state and mixed them to create something new. A red blend, called The Slayer, was their first offering. They made 45 cases and sold them mostly by word of mouth and through social media.

Mannenbach wines are not sold at state-run liquor stores. They can be purchased only at the winery — by appointment only. Tastings are not allowed under its current state liquor license.

Mannebach Cellars also produced 45 cases of petite sirah, which is almost sold out, and its largest vintage, 90 cases of Barbera, which is still available. A chardonnay is currently maturing in the bottles and will be ready in early 2021.

The winery is down the road from the Mannebach farm, where there is a menagerie of animals, including two pigs named Laverne and Shirley, a steer named Chuck, 30 chickens, four feral cats and two Akbash livestock guard dogs named Della and Albert.

It also has a fledgling test vineyard, planted with grapes, like syrah, merlot, viognier and Spanish tempranillo, that the couple think eventually might do well in Utah’s high desert climate. It’s difficult to tell how the project is going these days. The rootstocks are still young and, because it’s winter, without their usual leaves.

Besides Spain, the Mannebachs say they look to Idaho for wine inspiration. The Gem State has some 60 wineries, and the majority are concentrated along the southwestern portion of the Snake River Valley, blessed with volcanic soils, hot summer days and cool evenings.

“Why couldn’t we do that in Utah?” asked Meredith, noting that grape-growing is an underappreciated crop in the Beehive State.

It took the Mannebachs nearly six years from the initial dream of owning a winery to the actual sale of their first bottle.

Steve earned his undergraduate degree in microbiology from the University of Wisconsin-La Crosse before he was lured to Utah by the skiing. That was more than 20 years ago. Today, he continues to work his full-time job in business administration at University of Utah Hospital, making wine in his spare time.

“I slowly started getting into wine in my late 20s, and somewhere along the line I learned that you could make wine from kits. Then I learned about getting actual wine grapes that are frozen and shipped in five-gallon buckets. I fell in love with the process and realized I was finally using my microbiology degree.”

Steve said his educational background made the science side of winemaking relatively easy to learn, but it was the unpredictable parts of the task that attracted him.

“You can try different things without knowing entirely how the wine is going to react,” he said, “and you may not know the impact for years.”

There are so many variables, he explained, from the soil and environment to farming practices and harvesting decisions as well as fermentation and aging.

“It’s the kind of thing you can really think about almost nonstop,” he said, “and just contemplating the possibilities has its own satisfaction.”

Steve said it’s difficult to come up with the real “watershed moment” that led him to start his own winery, but during the process he stayed open to possibilities and landed where he wanted.

“It’s as if it chose me,” he said, “rather than the other way around.”

There have been a few times he wished the wine bug had passed him by — especially when dealing with regulation, taxes, irrigation systems and the darn gophers that dug holes in the vineyard.

“You have to have a passion,” said Meredith, who works full time for the state court system, “because it’s not for the faint of heart.”

State and federal laws surrounding the manufacturing and sale of wine, she said, also make it difficult for boutique companies to make a profit.

For example, the winery pays a 16% state tax — in addition to sales tax — to the Utah Department of Alcoholic Beverage Control, she said. “As a small business, trying to get cash flow and trying to grow organically, that is a killer.”

The Mannebachs have family in Wisconsin and Illinois and are licensed to ship wine to those states. Yet, under Utah law, they can’t ship to anyone in their home state. “We are licensed and pay all the necessary taxes,” Meredith said. “We should be able to ship within our borders.”

While the option is not available now, it might come in handy if Erda proves to be a good place to grow not just a Latter-day Saint temple, but also grapes.

Home Videos The WORLD of WINE – Wine News. Cheap wine, tasting notes and cooking with wine The World of Wine – May 2021 … END_OF_DOCUMENT_TOKEN_TO_BE_REPLACED

How to visit Napa Valley on a Budget. In this video Carson and I explain a few ways to enjoy Napa on the cheap. Tip and advice about how to visit Napa … END_OF_DOCUMENT_TOKEN_TO_BE_REPLACED

Home Videos Get To Know Argentina Wine | Wine Folly If you love Malbec, Argentina is your ultimate wine region. But that’s not … END_OF_DOCUMENT_TOKEN_TO_BE_REPLACED