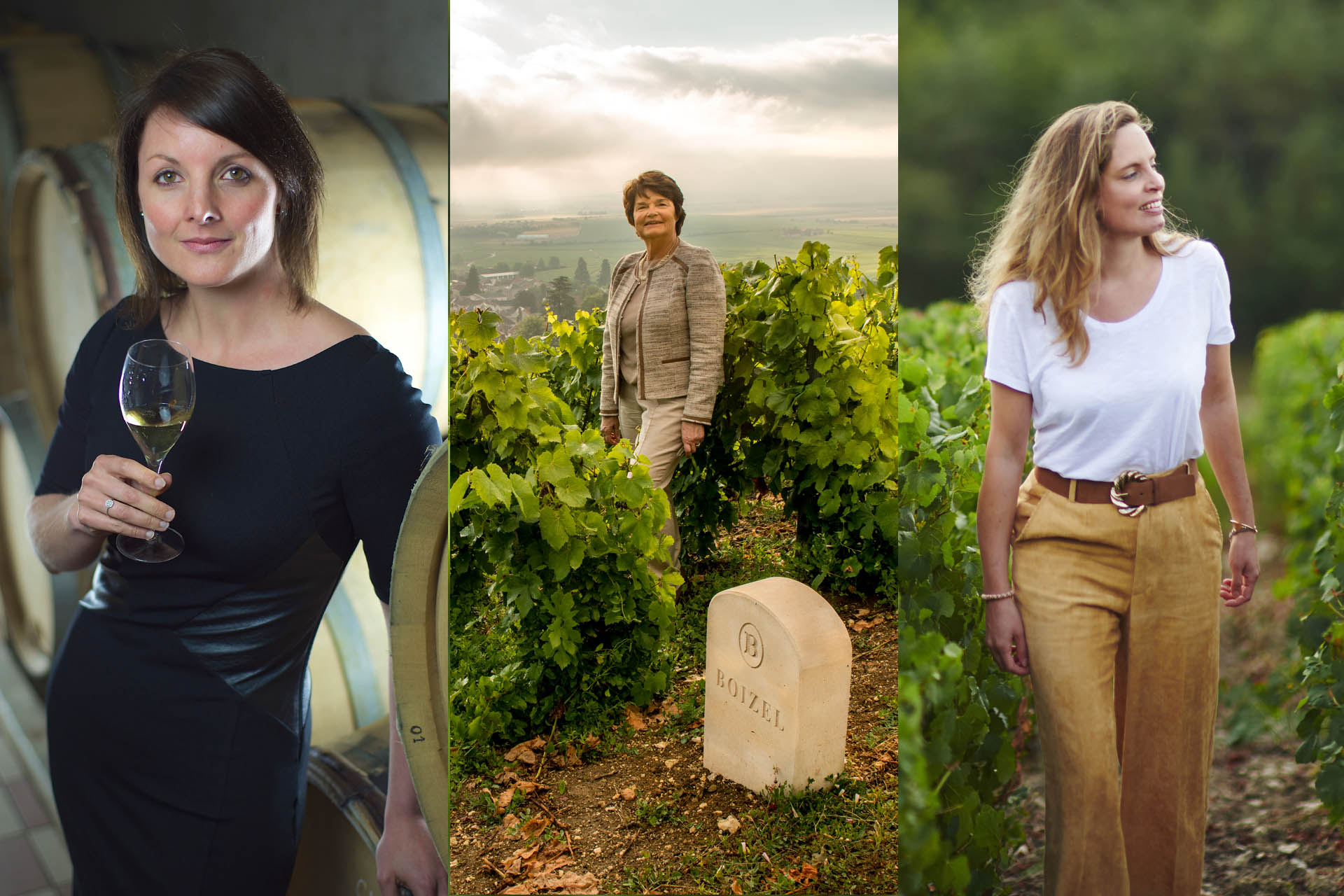 But those exceptional leading women are just that: exceptions. Like most wine regions, women in Champagne have mostly been in the background.

Things are changing, though. A sign of the times is the formation of two groups that promote both their wines and the place of women in Champagne.

La Transmission brings together women in senior positions, which includes owners, directors and cellar masters, many in major houses. Les Fa’Bulleuses de Champagne is made up of young friends who have taken charge at independent family growers. It aims to preserve that independence and promote the group’s Champagnes in group tastings.

Here are portraits of five women who are taking their places in Champagne’s leadership.

Twenty-five years is a long time to bring a plan to fruition. But that’s how long Malassagne, 55, has been pursuing her vision of how her family’s Champagne house, AR Lenoble, could survive independently in a world of big producers.

In 1993, she left her job as a financial controller at L’Oréal in Paris, planning to work with her father. His sudden illness just months later left Malassagne, at age 28, with a Champagne house mired in debt and crisis.

Joined by her brother, Antoine, in 1996, the pair have followed a path of survival to develop their own successful niche.

“The question was should we sell up or sell to the supermarkets,” she says. “Antoine and I decided to follow a third path.”

They chose to stay small. They would concentrate on their treasury of vineyards in Grand Cru Chouilly and Premier Cru Bisseuil, south and east of Épernay, respectively. They would craft unique Champagnes in the Burgundian model to highlight their terroir.

“Our credo is the life of the soil. That way, you have fewer grapes and better quality.”—Anne Malassagne

To make these wines, they needed a reserve of Champagnes that could be blended into each release. From 2010, rather than to age in barrels or tanks, these reserve wines are placed in magnums. Today, 30,000 magnums age in the Lenoble cellars.

And so the Mag range was born, a Champagne blend based on one vintage with at least 40% magnum-matured reserve wines. The first, Mag 14, was released in 2018. The latest iteration, Mag 16, an extra brut, arrived in 2020.

It’s been a long journey. Last year, they planned to celebrate Lenoble’s centenary. With celebrations on hold, Anne and Antoine decided to instead release a special set of four Champagnes, one made by each generation of the Lenoble family.

There’s a tradition of women in charge at Champagne Louise Brison.

“My grandmother, Louise Brison, was a strong woman,” says Brulez. “She is the one who bought vineyards when they were still such good value. She knew they were our future.”

Today, the estate has 37 acres. Brulez, 38, represents the fourth generation of the family in the Côte des Bars, in the southern Champagne region of the Aube. She sees herself as her grandmother all over again.

“I am organized and strong-willed,” she says. “It pains me to see men in jobs that women could do. Why do we always end up in marketing and not production?”

Production is what interests Brulez. Her father retired two years ago, but he hasn’t stopped working.

“He likes to sell, I like to make wine,” she says.

Trained at Dijon, Brulez amassed work experience in Bordeaux, Burgundy and Niagara in Canada. “I did not want to go to California,” she says. “There are too many French there.”

She’s put what she learned into action. It took time to understand the vineyard, but after 10 years, she felt able to start a change to organic practices. The vineyard was certified organic in 2020.

From the start, Brulez has produced only vintage Champagnes (apart from the rosé in the range), wanting, as she puts it, “a snapshot of a year.” It’s also a way for a small producer to distinguish itself. That’s a real concern for her and for the family business.

“My goal is to remain independent,” she says. “I know the balance in Champagne is moving against small growers, especially in these tough economic times. But I believe in our Champagnes, and I have to have faith in the vines, the grapes and my ability.”

Vitalie Taittinger, 41, is president of Champagne Taittinger. She’s very aware that her surname adorns every bottle the house produces.

Yet, for a time, the Champagne brand was separated from her family. In 2005, the Taittinger company was sold to an American property investment fund after pressure from family shareholders who wanted their money.

For a year, her father, Pierre-Emmanuel Taittinger, struggled to buy back the Champagne business. In the process, the group’s hotels and Baccarat crystal had to be abandoned.

At age 26, Vitalie was already working for the business with her brother, Clovis.  She says today, with emphasis, that one of her priorities as company president “is to guard our patrimony. It is so much stronger than us. I am here to keep the soul of the house.”

She took over as president from her father in January 2020. How easy is it to replace such a charismatic figure?

“I have been with him since I was a child, so I know all his sides,” she says. “Honestly, I don’t see him as charismatic, but someone who was always very straight with us… I will never be him.”

Almost immediately upon her promotion, Taittinger was plunged into the novel coronavirus pandemic. It taught one lesson quickly.

“I have become aware of our great responsibilities for the economic well-being of the families who work for us,” she says.

While she deals with the here and now, Taittinger also has to look ahead. Two things concern her.

One is the place of Champagne in a world of many sparkling wines. “We need to position Champagne as a wine and not just bubbles, to tell the story of the history, our terroir and not to compete too directly,” she says.

The other is climate change and the need to pursue sustainability. This brings out another reminder of the importance she places on the family’s proud tradition. “We are committed to the environment. After all, my name is on the bottle.”

De Sousa, 30, likes to travel, to meet people. When her father, Erick, still the head of the company, retired from an active role last year, it was only natural that she would take on the sales, marketing and, in normal times, traveling.

Her sister, Julie, took over the vineyard, while her brother, Valentin, helmed the cellar.

Having completed the Organisation International du Vin (OIV) Master of Science in Wine Management, De Sousa feels equipped for her new role. The course brings together people from all over the world in one happy, if temporary, family. And though she’s taken a role often filled by women in a wine family, she still feels the need to prove herself in what she sees as a man’s world.

“I have to show that I am just as capable and to gain the respect of men, especially when I visit restaurants and importers,” she says.

That’s one reason that she’s an enthusiastic member of Les Fa’Bulleuses, a group of friends who run independent family Champagne grower producers.

As with so many smaller growers, De Sousa tells how hard it is to remain independent. Her father built an enviable reputation for De Sousa Champagnes, mainly on their quality as blanc de blancs from the Côte des Blancs Grand Cru vineyards of Avize, as well as for his adherence to biodynamic principles.

“It is hard to increase our land because of the price of vineyards, so we constantly add value to sustain our reputation,” she says.

Succeeding their visionary father, the three siblings aim to keep the momentum going by harnessing new technologies in the cellar and working hard to spread the family name. Charlotte will be back on the road as soon as she can.

Now that she is retired after 47 years at the helm of her family’s operation, Boizel, 71, can afford to take a long view. She can talk about the change in attitudes to women in wine. And she can look to the future as women are more empowered to demand their rightful place.

At the beginning, there was no place for her in the family business, nor did she want one. She wanted to be a museum curator.

“I left Épernay and never wanted to go back,” says Boizel.

But in 1972, her father died. Then her brother became seriously ill.

“We either sold up, or took over the reins,” she says.

She and her new husband, Christophe, returned to Épernay and learned on the job.

“At one time, our neighbor, Christian Pol Roger, lent his cellar master to help us make the wine,” she says.

In 1994, Boizel once again had to choose whether to sell or seek investors. Together with Bruno Paillard, of Champagne Bruno Paillard, and Philippe Baijot, of Lanson Champagne, she saved the business. They formed the partnership of Lanson-BCC (the “B” is Boizel) that survives today.

“When I started, it was tough being a woman,” she says. “When I went to meetings with my sales manager, they wanted to talk to him.” Today, she says, “although business is harder, women are more respected.”

The creation of La Transmission, a group of women in powerful positions in Champagne houses, reflects that change. The group defends Champagne, and its members exchange ideas and research about subjects like climate change. Yet, Boizel says, “we want to help women to feel empowered, to be committed and bold, and to demand their rightful place.”

The future of Champagne Boizel is in a good place. Her two sons, Florent and Lionel, are in charge.

“The challenge now is to make Boizel better known,” she says.

Home Videos The WORLD of WINE – Wine News. Cheap wine, tasting notes and cooking with wine The World of Wine – May 2021 … END_OF_DOCUMENT_TOKEN_TO_BE_REPLACED

How to visit Napa Valley on a Budget. In this video Carson and I explain a few ways to enjoy Napa on the cheap. Tip and advice about how to visit Napa … END_OF_DOCUMENT_TOKEN_TO_BE_REPLACED

Home Videos Get To Know Argentina Wine | Wine Folly If you love Malbec, Argentina is your ultimate wine region. But that’s not … END_OF_DOCUMENT_TOKEN_TO_BE_REPLACED