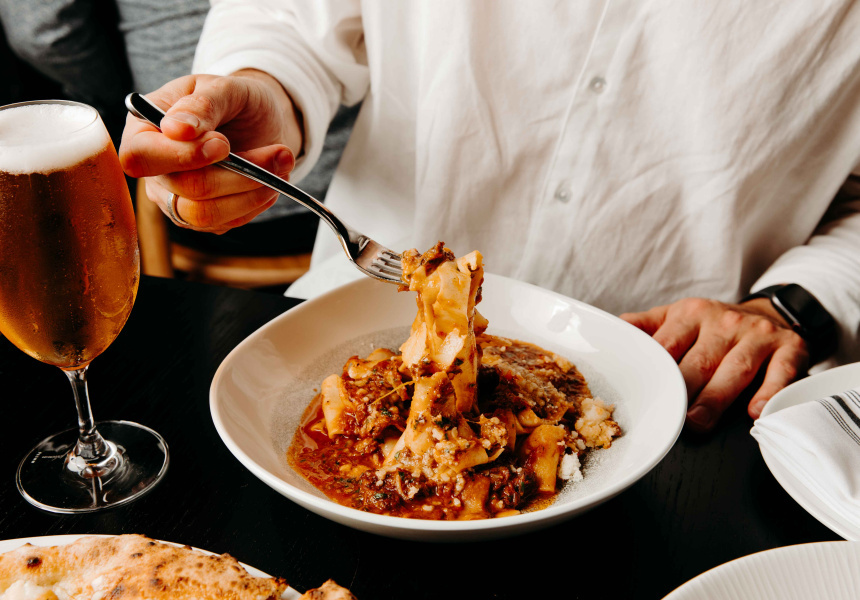 The stream of new Italian restaurant openings in Melbourne is almost always steady. It’s everyday food, and we just can’t get enough of it. So, we’ve rounded up five of our favourite newcomers – from Highett to Northcote – as well as two honourable mentions.

An animated red neon hand with “pinched fingers” – a classic Italian gesture – marks the spot at Va Penne, Northcote’s new Italian joint. It’s by the owners of local institution Joe’s Shoe Store just down the road, who consider it “a bit more adult-contemporary” than its older sibling. And here, unlike at Joe’s, it’s almost all about the food. Small antipasti plates (think house-made pickles, salsa verde-doused burrata and salumi) come with a breadbasket, which includes crisp, cracker-like Sardinian flatbread made in-house. There’s also a pork-and-fennel meatball ragu studded with speck, and rotolo pasta (loaded with Tuscan cabbage and ricotta) that’s poached then pan-fried in brown butter. But the pièce de résistance is the garlicky spaghetti vongole – swimming gloriously in oil – that front-of-house manager Lazlo Evenhuis says is “the one people are travelling for”. (He’s not wrong.) The drinks list is short, sharp and reasonably priced – with a big focus on vermouth. Try a sour made with chinato, an aromatised wine somewhere between vermouth and amaro.

Five years after opening Hampton Wine Co, a trio of hospitality vets is back in the restaurant game with Abbiocco (pronounced “ab-byok-ko”), a swish new Italian restaurant for Highett. According to co-owner Pierre Geoffroy, “There’s a lot more room to bring sophisticated dining to bayside suburbs so people don’t have to head into the city”. And this small, well-polished venue is doing just that. All the pasta – including gnocchi, squid-ink spaghetti, tagliatelle and pappardelle – is made daily on-site. Large, tubed paccheri come with a classic tomato-basil sauce and That’s Amore buffalo mozzarella, while dumpling-like tortelli are stuffed with prawn meat and immersed in a stock made by roasting the heads and shells and cooking them down with cream. You can also sip Aperol Margaritas, spritzes with house-made limoncello and obscure wine varieties. But here’s our top tip: don’t leave without trying the tiramisu – it’s made the old-school way, sans cream.

Peaches and Cheek are no more. In their place – also by the guys behind Dexter and Takeaway Pizza – is Dom’s, a new pizzeria and rooftop bar in the CBD that’s kinda like a fancy RSL. Ascend hand-stained timber stairs to the first floor, where you’ll find woodfired pizzas topped with house-made charcuterie (see it all hanging in the dry-ageing fridge) and bistro-style leather booths to keep things cosy. The team uses a sourdough base that’s fermented for 72 hours then dimpled like focaccia; red sauce pools into the craters, making for a pizza that’s best eaten fresh out of the oven. Two standouts: the seemingly basic marinara with tomato sugo, confit garlic and extra-virgin olive oil, and another with house-made mortadella and garlic-fermented honey.

Unlike the pizza-centric restaurants that came before it, the latest addition to the DOC Group’s stable of venues is completely vegetarian and gluten-free – with a strong vegan focus. And you’ll find it just a few doors down from DOC’s Carlton pizzeria in the space formerly occupied by The Town Mouse. “A lot of people say you can’t do Italian vegetarian,” says co-founder Michael Costanzo. “Yes, you can, and you can do it very well. It’s about bringing back those simple dishes that mum and nonna used to make.” So, dishes don’t stray too far from tradition. Some are inherently vegan (grilled vegetable tartare with capers, mustard and truffle paste; charcoal spaghetti with Roma tomatoes) or vegetarian (eggplant parmigiana with black-cabbage pesto and burrata; buffalo ricotta and spinach gnudi with burnt butter and crisp sage). But a few have been entirely veganised: the saffron arancini is filled with vegan brie, the lasagne has dairy-free bechamel, and the tiramisu swaps mascarpone for cashew cream.

There are massive changes afoot at 127 Brunswick Street. The Ichi Group’s old three-storey pub, which was originally known as the Old Colonial Inn, is now called Hotel Fitzroy. Ground-floor izakaya Ichi Ni Nana, is sticking around, as is the existing rooftop bar and basement karaoke bar, but Village People Hawker Food Hall isn’t. The Southeast Asian-inspired dining hall has swapped its aromas of lemongrass and tamarind for those of 72-hour slow-proved pizza thanks to buzzing new Italian diner Cappo Sociale. “We’ve gone for a very slow proof, which gives it great aeration, keeps it lovely and light, and gives it a lovely texture,” says chef Maurizio Esposito (ex-Cecconi’s and Il Bacaro). “Sometimes you can smash two or three pizzas in a day.” He’s serving it, most notably, with mild casalinga salami and a touch of ’nduja, plus there’s melt-in-your-mouth beef carpaccio with beetroot “ketchup”, and pappardelle ragu made with Wagyu shin, red wine, tomato and a bright burst of lemon.

After 25 years, CBD stalwart Il Bacaro has had a sleek refurb – and returned to its Venetian roots. Refined new dishes such as a delicate “fish charcuterie board” and silver-leaf-crowned zucchini risotto now sit alongside enduring classics such as the Moreton Bay bug spaghettini. And while not technically a restaurant, Pasta Club is a private, carby, every-now-and-then dining experience in a vibrant Italian-style courtyard.

Home Videos The WORLD of WINE – Wine News. Cheap wine, tasting notes and cooking with wine The World of Wine – May 2021 … END_OF_DOCUMENT_TOKEN_TO_BE_REPLACED

How to visit Napa Valley on a Budget. In this video Carson and I explain a few ways to enjoy Napa on the cheap. Tip and advice about how to visit Napa … END_OF_DOCUMENT_TOKEN_TO_BE_REPLACED

Home Videos Get To Know Argentina Wine | Wine Folly If you love Malbec, Argentina is your ultimate wine region. But that’s not … END_OF_DOCUMENT_TOKEN_TO_BE_REPLACED