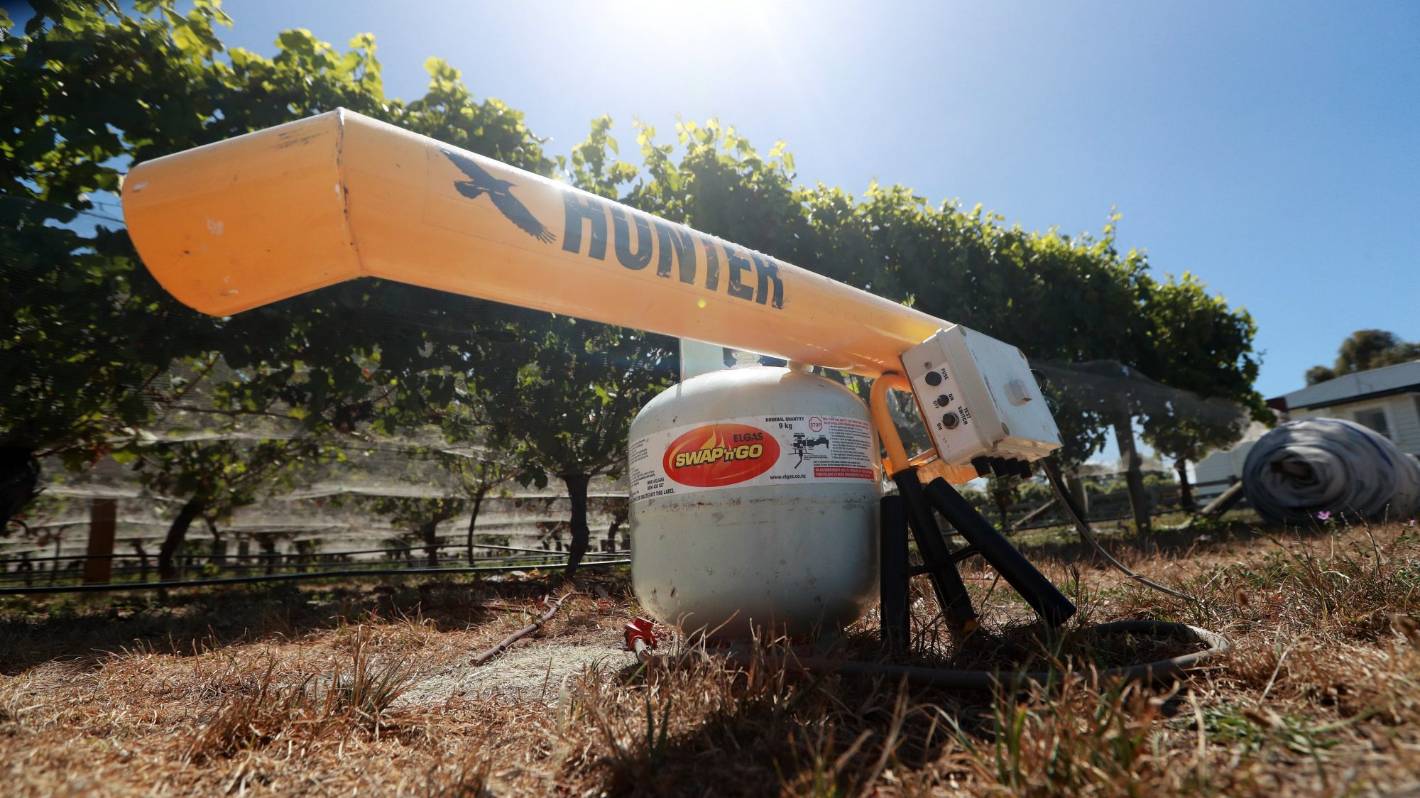 Vineyards using gas-powered “bangers” to scare birds off ripening grapes are asked to check them as malfunctions can produce “a fireball” in dry grass.

With parts of Marlborough reaching “dry” and “very dry” on Niwa’s drought index this month, coinciding with the start of the grape harvest, a spark from a bird banger could set a grass fire off to a roaring start.

“If gas is leaking into the grass, when the ignition sparks, the whole area goes boom, like a ball of fire.”

Firefighters were called to such a fire last harvest. A banger on tripod legs had blown over in the wind and ignited the grass, in late March.

A bird banger knocked over by the wind at the foot of the Wither Hills on March 18, 2007 ravaged 48 hectares of farmland, and a grass fire that consumed about 40 vines on March 3, 2010 was also believed to have been caused by a bird banger.

For models on tripod legs, Hayles suggested bracing the legs or tying it down. Newer models with mechanisms to lock the legs in place were still vulnerable to strong winds, he said.

“And of course there are other ways to scare birds.”

Fire and Emergency New Zealand senior fire investigator John Foley said it seemed many of the machines were pulled out of the shed about this time each year without being checked for faults.

“Over time they get brittle, the hose gets a leak in it. We’ve had a number of fires now that started from hoses that have failed, and bird bangers falling over in the wind,” Foley said.

“What we’re asking people to do is check their bird bangers and all the fittings including the gas hoses. If it’s on the ground, it needs to be on a gravel area, because then if something goes wrong, it’s got nothing to burn.”

While the region got some rain last week it was not enough to ease the dry conditions south of the Wairau River, Foley said.

“People think when we get rain the fire risk is lower, but it’s all gone by the next day, it’s evaporated.

“Marlborough is very dry and is going to remain dry for a bit.”

Niwa said while the Marlborough Sounds got heavy rain in the past week, in isolated areas up to 100 millimetres, eastern Marlborough only had minimal rainfall and soil moisture increases were small-to-moderate.

A front was expected to deliver light to moderate rain to the eastern South Island on Monday evening, but high pressure would bring dry weather for the rest of the week.

The number of hot days is expected to keeping rising in the coming decades, as climate change raises New Zealand’s baseline temperature and brings longer and more frequent heat waves.

Rural fire crews quickly contained a grass fire off State Highway 1 north of Seddon after a possum got electrocuted by power lines, about 12.45am on February 8.

That followed a grass fire in late January in the Awatere Valley, sparked by an ember from a burn pile lit back in August which the property owner thought was out.

The same day, a fire consumed nearly 300 hectares and a remote DOC hut by the Clarence River. The investigation into the cause was still ongoing, Foley said.

Foley urged people working in rural areas to consider how their activities could start a fire.

“Tractors topping a paddock, or ride-on mowers, we have a couple of fires from them each year. People using machinery at 2pm on a 30-degree day.

“Even people parking on long dry grass, the exhaust can be hot enough to light a fire. The region is bone dry at the moment.”

Marlborough was in a prohibited fire season since January 27, meaning there was a total ban on outdoor fires and all previously granted fire permits were no longer valid. Extreme fire danger at Blenheim’s Wither Hills Farm Park resulted in the upper tracks being closed.

Home Videos The WORLD of WINE – Wine News. Cheap wine, tasting notes and cooking with wine The World of Wine – May 2021 … END_OF_DOCUMENT_TOKEN_TO_BE_REPLACED

How to visit Napa Valley on a Budget. In this video Carson and I explain a few ways to enjoy Napa on the cheap. Tip and advice about how to visit Napa … END_OF_DOCUMENT_TOKEN_TO_BE_REPLACED

Home Videos Get To Know Argentina Wine | Wine Folly If you love Malbec, Argentina is your ultimate wine region. But that’s not … END_OF_DOCUMENT_TOKEN_TO_BE_REPLACED