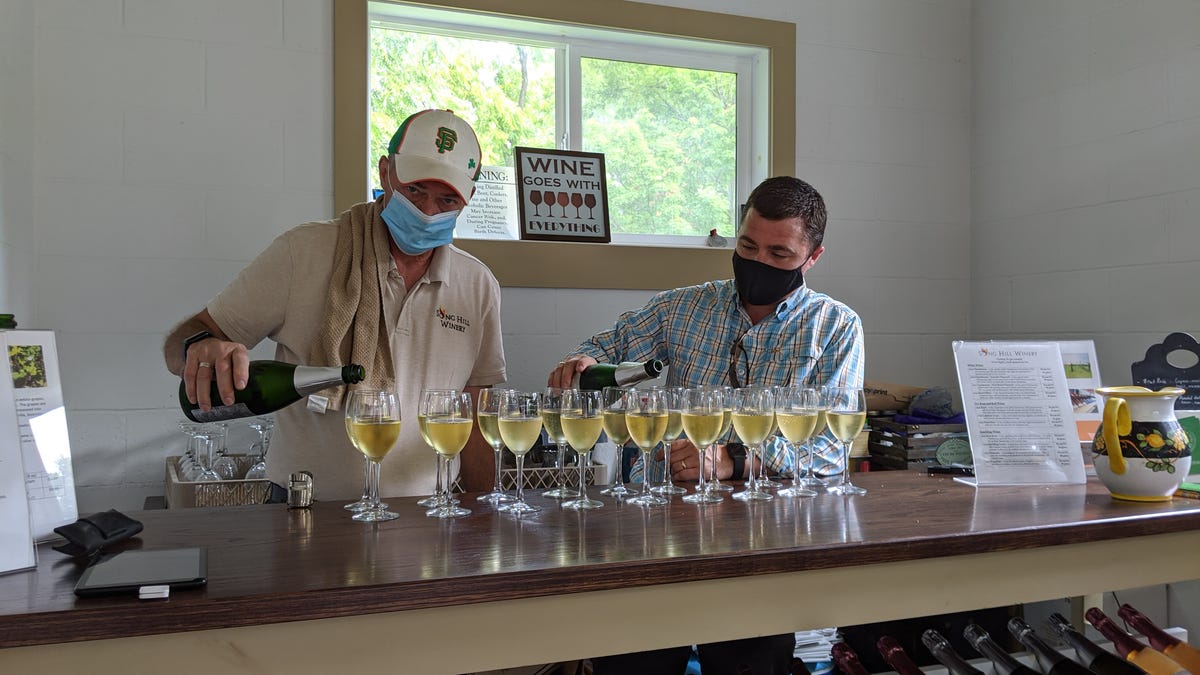 While the COVID-19 pandemic hit wineries in the Finger Lakes hard, many also found room to adapt. Whether it was renovating property or creating new events that fit within federal and state health and safety guidelines, many winery owners reported finding new ways to improve their business, both to survive the rest of the pandemic and to plan ahead for the future.

“The reason we are optimistic is because we have seen a pretty consistent uptick in visits to the winery for wine tastings,” in recent weeks, French said. “They’re excited to get out,” he added, referring to visitors from neighboring states such as New Jersey or Ohio, who might ordinarily travel farther for a vacation.

French has worked to include virtual tastings through Zoom, having successfully done one with the Canandaigua Lake Wine Trail that brought in 100 people. However, French said they haven’t neglected in-person tastings, which have now switched to being done solely through reservations.

“Our guests go online as far out as they want, they can do the next day or six weeks out, booking it as if it were a tee time at a golf course,” he said, which gives them an advantage when planning the tastings, to allow for a comprehensive experience.

“That’s kind of one of the neat takeaways, by having wine tastings scheduled, we’re not interrupted by people coming in midstream,” he added.

Now patrons will find a dining room that has been given over fully to tastings from Friday to Sunday, 11 a.m. to 4 p.m., which can fit up to 12 people due to distancing guidelines this time of year. And to comply with guidelines from the state requiring all facilities to offer food with alcohol, Arbor Hill took advantage of its on-site restaurant, offering plenty of unique sides to pair with the wine.

“So our customers are able to choose, like having a side of German potato salad, to conform with the New York state guidelines. We’ve certainly seen an uptick in our pretzel bites consumption. It’s been astounding,” French said, adding it’s “kind of a win-win.”

Song Hill Winery also found unique opportunities while working within the state health guidelines. The Victor winery restructured its annual summer festivals to become more of a guided culinary tour around the vineyard. According to Conor Gallagher, winemaker and owner of Song Hill, the winery swapped out the usual buffet-style meals for more specific wine and meal pairings last summer. Events including the celebratory release of a new wine by the vineyard included a three-course meal, while other events were staged throughout the property, allowing guests to eat one course or enjoy a tasting in the vineyard before having the rest of the meal elsewhere at the winery.

“We’d do one course out in the vineyard, then they’d be directed to inside the winery, where they’d have three to four more courses,” Gallagher said.

Song Hill also benefitted from plenty of local tourism from last summer, with an abundance of New Yorkers coming out to visit for tastings, more than willing to participate in the reservation model adopted by the small winery.

“Customers getting used to making reservations was very useful for us,” Gallagher said.

In terms of sales, Gallagher said that while restaurant sales have been down, they’ve been able to make it up through other avenues. These include curbside pickup and online store orders, which had been around since before the pandemic, but did expand dramatically.

“I think I did more online sales than I did in the last three years combined,” Gallagher said.

Ideas that will stay

Gallagher predicts the reservation model for tastings is here to stay.

Gallagher also believes many places will continue to offer food paired with the wine, since “customers wanted more of that,” in his experience.

“I think a lot of places will probably continue that, working on their menus,” he noted.

At Arbor Hill, French said that while reservation-only tastings are likely to stay, another practice thought up by staff will also stick around: wine flights.

“One server had an idea to do a wine flight. It’s not the same as a wine tasting. With a wine flight you can come in, come out back to the restaurant or gift shop,” and sample six different wines, he explained. “The difference is you get to enjoy the wine, but you’re not getting the story,” behind the creation of the wine.

“It’s kind of like a self-guided wine tasting. It does allow us to accommodate a customer who comes in the door, unaware that tastings are done by appointment,” he said, adding that these customers still get the tasting notes.

And much like other wineries, while there was a “significant dip” in sales through traditional distribution to retailers from March 20 to early June, French said online sales experienced a “dramatic uptick” with most sales going direct to consumer, leading to what he termed “Christmas-type numbers in March, April, May.”

Billsboro Winery also found plenty of eager customers, with business through the online store practically doubling. In owner Kim Aliperti’s estimation, the increase in online sales and foot traffic to the Geneva-based winery helped offset the dip in sales to distributors and wholesale retailers. Aliperti also said another factor that has helped Billsboro is its Il Fienile Wine Club, which helped keep up interest in the winery while generating revenue.

“When this first happened, we thought we’d lose members. While we did lose some, we actually grew, more joined than left, so that was a surprise,” Aliperti said, noting that in several industry conferences she’s attended, many other winery owners have expressed the same observation.

Aside from finding new niches to continue bringing in revenue, wineries and vineyards also found time to focus on renovations and physical improvements to their properties.

At Arbor Hill, French said the shutdown in the early spring gave the winery a chance to renovate its gift shop. From March 20 to July 5, the gift shop remained closed while the interior was completely overhauled, with new flooring and counters. Once they reopened the store “to accolades,” as French put it, with “incredible support” from sales in September and October, the winery appeared to be in a strong position.

“One of the neat things about it, that timeframe, was, all of the work, the majority of the work was done by staff,” he said, which “helped us not have to lay anybody off.”

He added: “We were fortunate. One of our employees was an extremely gifted woodworker, knew his way around sanding, painting, staining. It was a golden opportunity to capitalize on. It worked out.”

Similarly, Billsboro Winery also chose to take on a capital project this year. In order to expand the amount of outdoor space available to customers, Aliperti said the winery decided to invest in the construction of an outdoor pavilion, allowing the space to be used during inclement weather.

“I’m feeling pretty confident it’ll be ready by the end of the season,” she said, adding that the covering will “also allow us to put some heaters under there for early spring, late fall. It should allow us to expand our season.”

“We’re lucky to have a project we had been talking about doing before COVID,” she said. “Once it happened, we talked about how we could not afford to lose the space.”

Nationally, the sales growth rate for the wine industry was difficult to determine, with data being hard to retrieve due to the pandemic. According to Silicon Valley Bank’s State of the U.S. Wine Industry report for 2021, the total growth in wine volume grew slightly, give or take the margin for error, which was an improvement over last year. The report also found that certain business models in the industry were hit harder by the pandemic than others.

“Premium and luxury producers that were unable to sell in closed restaurants and tasting rooms were sent scrambling, while large producers that owned the off-premise channel with large partner wholesalers had the enviable problem of being caught short of product to sell as sales rerouted through grocery and drugstores,” the report from Rob McMillan, executive vice president and founder of the bank’s Wind Division, reads.

“To say 2020 was a difficult year is an understatement. While bruised, most of us are back at our craft with hopeful anticipation as we move toward a COVID-free world,” McMillan wrote. “While I can say with confidence that 2021 will be better, I can also say that ‘normal,’ when we get there, will be different from what we left. There are new issues that need to be planned for.”

Home Videos The WORLD of WINE – Wine News. Cheap wine, tasting notes and cooking with wine The World of Wine – May 2021 … END_OF_DOCUMENT_TOKEN_TO_BE_REPLACED

How to visit Napa Valley on a Budget. In this video Carson and I explain a few ways to enjoy Napa on the cheap. Tip and advice about how to visit Napa … END_OF_DOCUMENT_TOKEN_TO_BE_REPLACED

Home Videos Get To Know Argentina Wine | Wine Folly If you love Malbec, Argentina is your ultimate wine region. But that’s not … END_OF_DOCUMENT_TOKEN_TO_BE_REPLACED