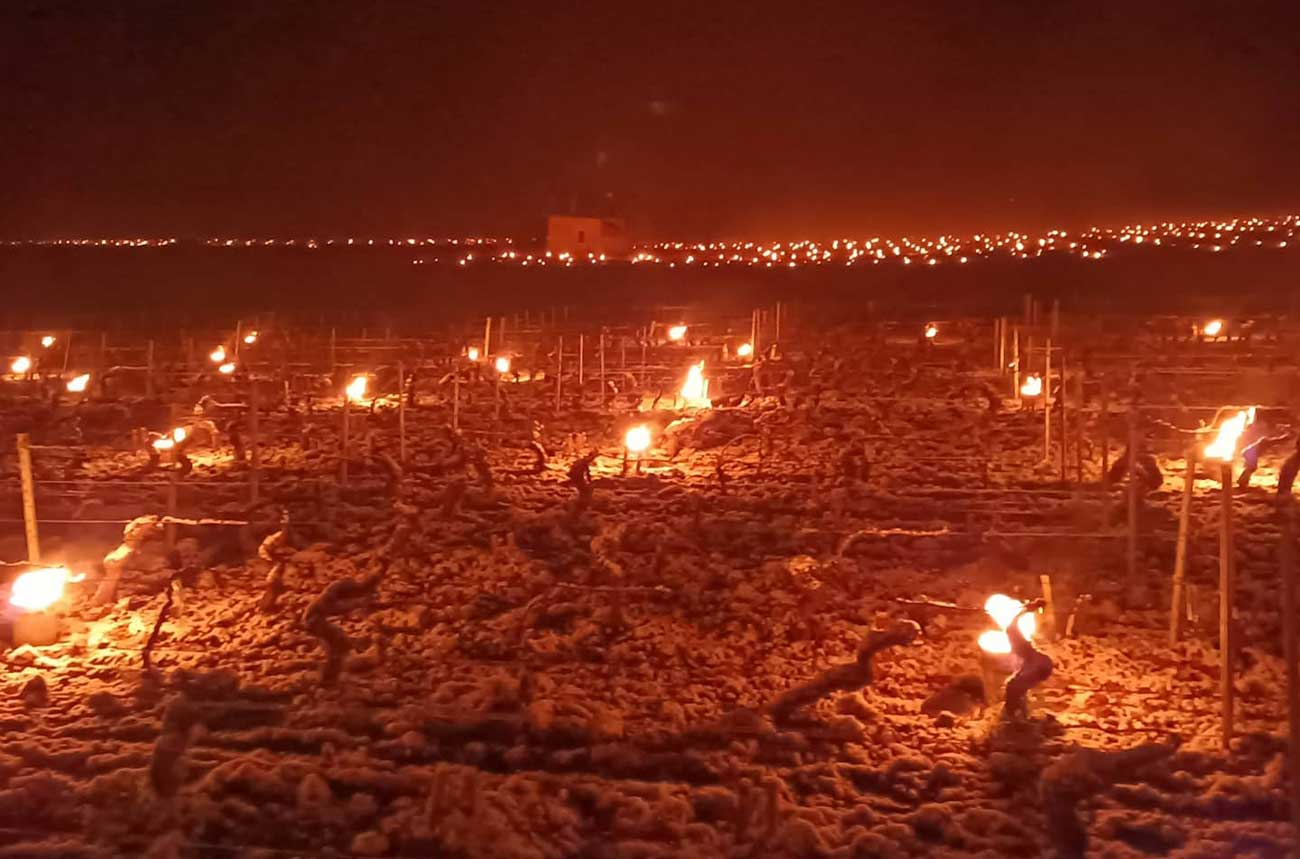 There were growing fears that frost may have caused significant damage to French vineyards in several regions this week.

Many winemakers have lit candles and controlled fires next to rows of vines in order to help protect the emerging 2021 crop from a sudden drop in temperatures. Aerial photos on social media showed hundreds of candles lit across vineyards.

Some producers also launched helicopters to fly above their vineyards, a method that can help to prevent frost by encouraging warm air to circulate.

There were particular concerns on Thursday (8 April) about vineyards in Bordeaux and Burgundy, although winemakers cautioned that the full picture was still unclear.

Bordeaux’s regional wine council, the CIVB, said damage was still being assessed but that ‘it is already certain that this spring frost will severely impact the volume of the 2021 harvest’.

In Burgundy, Jean-Luc Vitoux, of Domaine Belleville in Rully, told Decanter, ‘The last three nights, with temperatures between -3°/-6° [Celsius] and the snow on the night of  the 6/7 April, very seriously damaged the vineyards of Chardonnay at Domaine Belleville, even if candles burned during these nights to try to protect them.’

‘All Bourgogne, from Chablis to Mâcon, has been affected by this episode of extreme cold to varying degrees, depending on the state of the [vines’] vegetative cycle,’ said Thiébault Huber, president of the Winegrowers of Bourgogne union (CAVB).

‘We think that the Chardonnays, which are further ahead [in the growing cycle], will have been affected much more than the Pinot Noirs, which had not yet completed their bud break,’ he told Decanter.

‘It is currently impossible to assess the actual damages. They will really show in a few weeks.

‘Bourgogne winegrowers did what they could to fight, but each period of frost was too long and the temperatures were too low. Nature has been stronger than us.’

He added, ‘From now on, we hope that this episode will be the last and that the secondary buds will be strong enough.’

He said producers would remain vigilant, particularly as temperatures are expected to drop again next week.

Winemakers have been keeping a close on vineyards. This photo shows anti-frost efforts at Château Lapourcaud in the Bordeaux area. Photo credit: Vincent Gas.

In Champagne, temperatures fell to minus seven degrees Celsius for two nights this week, according to the local chamber of agriculture for the Marne area.

It said on Twitter that Champagne vines had ‘not been spared’ from frost but the impact varied. It reported some damage to early budding Chardonnay, but also ‘little to no impact’ on later varieties, Pinot Noir and Pinot Meunier, so far.

In a follow-up tweet, it added, ‘To date, it is difficult to quantify the damage because this episode of freezing is not over and the symptoms will only be visible within a few days. To be continued…’

In Bordeaux, many winemakers also lit fires and did what they could to limit the impact of the sub-zero temperatures.

Fires were lit in Bordeaux vineyards to help fight against frost and sub-zero temperatures. This shows one fire at Château Lapourcaud. Photo credit: Vincent Gas.

News station France 3 reported damage to vineyards in the Graves area, but again the full extent of any impact was not yet known.

As reported above, Bordeaux wine council, the CIVB, said the impact of frost was severe across large parts of the region’s vineyards – but it cautioned that damage was still being assessed.

‘The entire industry wishes to express its solidarity with all these women and men who found themselves powerless in the face of this exceptional frost,’ said CIVB president Bernard Farges.

Chateau de L’Hospital, in Graves, said on Facebook that, despite its efforts in the face of temperatures ranging from minus three to minus six Celsius, ‘the vines did not resist, notably in our Merlot parcels’. But the estate added full damage wasn’t yet clear. ‘We are not giving up.’

On the other side of the country, France Bleu reported significant damage to some vineyards in the Arbois appellation in Jura, too.

Updated at 3:50pm on Thursday 8th April with comments from the CIVB in Bordeaux.

Home Videos The WORLD of WINE – Wine News. Cheap wine, tasting notes and cooking with wine The World of Wine – May 2021 … END_OF_DOCUMENT_TOKEN_TO_BE_REPLACED

How to visit Napa Valley on a Budget. In this video Carson and I explain a few ways to enjoy Napa on the cheap. Tip and advice about how to visit Napa … END_OF_DOCUMENT_TOKEN_TO_BE_REPLACED

Home Videos Get To Know Argentina Wine | Wine Folly If you love Malbec, Argentina is your ultimate wine region. But that’s not … END_OF_DOCUMENT_TOKEN_TO_BE_REPLACED