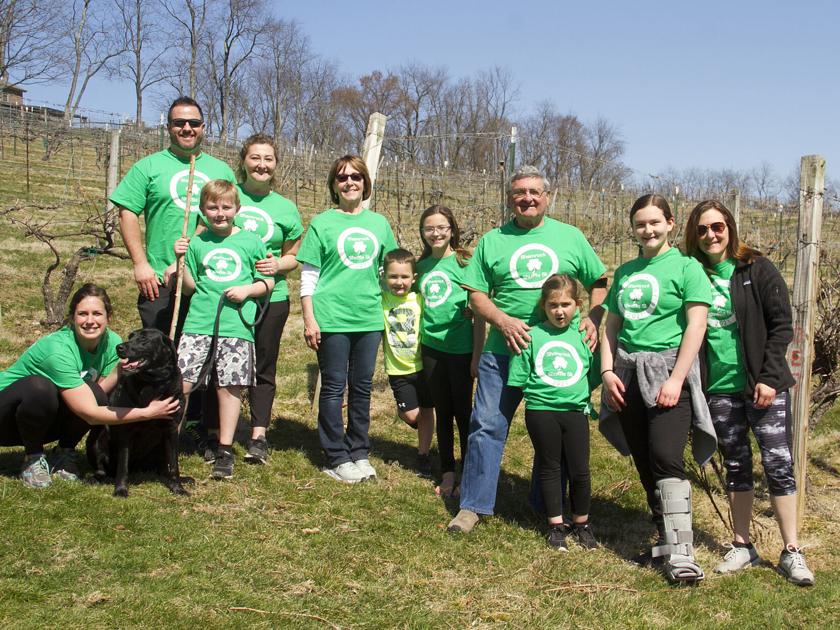 By the beginning of the 1990s, the grapes Richard Ripepi had planted on his Carroll Township hillside were flourishing.

“So,” his wife, Marie, inquired, “all these grapes are to produce wine?”

That, indeed, was Rich’s intent, to follow the family tradition he had known while growing up across the Monongahela River in the Gallatin neighborhood of Forward Township.

“I said, ‘Yeah, they’re doing great,’” he recalled as his answer for Marie. “She said, ‘Well, what are we going to do with all the wine? Our family can’t drink this much wine.’ I said, ‘Well, we either become grape farmers or we build a winery.’”

Ripepi Winery marked its 30th anniversary last year and today boasts 18 varieties of grapes growing throughout a 15-plus-acre vineyard with a southeastern exposure. All of it was still wooded in 1984, when Rich became determined to replace trees with grapes.

An inquiry with Penn State Extension in Erie County led him to Cornell University, located in the heart of New York Finger Lakes wine country. There, he met and immediately befriended renowned professor of viticulture Robert Pool.

“I said, ‘Hey, I’m south of Pittsburgh. I know nothing about growing grapes. I want to grow grapes,’” Rich recalled. “He gave me four or five books and said, ‘Read these.’”

His taking the initiative to learn all he could before planting paid off with a successful initial growing season.

“So I said, ‘OK, let’s plant another 600.’ And we started clearing the ground, one acre at a time,” he said. “We kept planting grapes. They kept on growing.”

He has kept up with the educational aspect, including using opportunities for learning offered by an even closer major university.

As a result, he knows his grapes. He knows what to plant that can withstand Western Pennsylvania’s weather and what tends to resist disease. And he knows the most important aspect as far as winemakers are concerned.

“I’ll go to different vineyards and wineries, and I’ll taste different grapes,” he said. “And once I get a grape that I like the taste of, then I figure out if I can grow it in our climate or not.”

In his vineyard are traditional American varieties such as Concord, Niagara and Steuben, joined by hybrids developed at Cornell, including Melody and Schuyler, plus French-American hybrids: De Chaunac, Maréchal Foch, Vidal Blanc and a new planting for this year, Cabernet Franc.

Many of the Ripepi wine offerings are varietal, 100% from the same grape. Others are blends, including the first one Rich ever mixed, which he calls Valley Sunrise.

“They said, ‘Make a rosé.’ So I took two bottles of white and a bottle of red, blended them together, and that’s been our blend for the last 30 years,” he said. “And it’s the best-selling wine we have.”

Coming up with a good blend, of course, involves plenty of experimentation.

For those who prefer the taste of fruit wines, those are among Ripepi’s offerings, including some with their origins at nearby Triple B Farms, which Rich calls “the best apple orchard in Western Pennsylvania.”

Tending to the vineyard takes a lot of work, but members of the Ripepi family wouldn’t have it any other way.

“We pride ourselves on growing good grapes, because you have to have good grapes to make good wine,” Rich said. “We’re proud about doing that.”

Home Videos The WORLD of WINE – Wine News. Cheap wine, tasting notes and cooking with wine The World of Wine – May 2021 … END_OF_DOCUMENT_TOKEN_TO_BE_REPLACED

How to visit Napa Valley on a Budget. In this video Carson and I explain a few ways to enjoy Napa on the cheap. Tip and advice about how to visit Napa … END_OF_DOCUMENT_TOKEN_TO_BE_REPLACED

Home Videos Get To Know Argentina Wine | Wine Folly If you love Malbec, Argentina is your ultimate wine region. But that’s not … END_OF_DOCUMENT_TOKEN_TO_BE_REPLACED