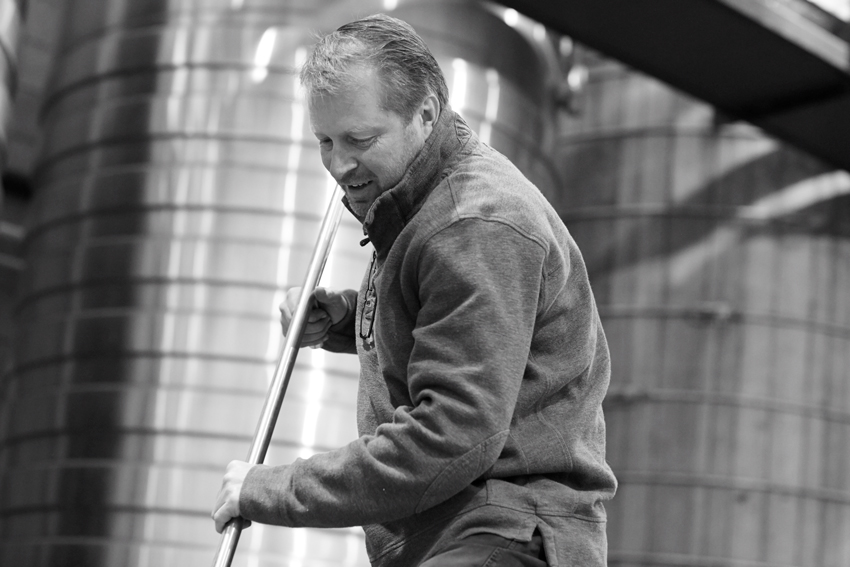 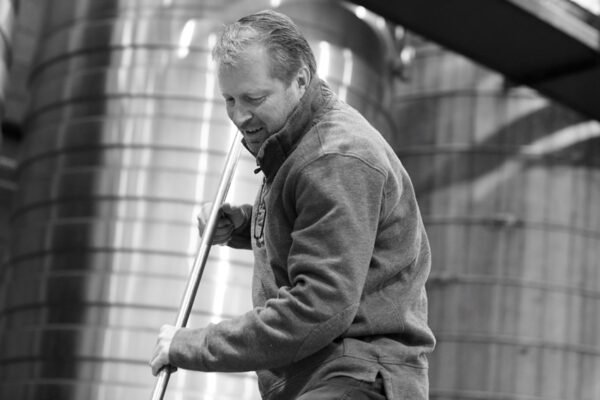 “It’s the explorer in me,” Grindley said. “The great thing about being a cave explorer is you can round that corner in a cave where no one else has been before and you’re the first footprints; that’s a bit of a buzz, really. You don’t know where it’s going to go. And that’s why I’m in Paso – there are a lot of hillsides in Paso that haven’t been planted yet. There are so many microclimates here, and I love exploring emerging varietals in Paso. I get the most excitement out of exploring and trying to make these varietals world class, and my international experience helps me to do that.”

Grindley brings nearly 25 years of experience gained from training in winemaking regions across the world to Brecon Estate. When it came to naming the winery, he and his wife, Amanda, tapped into their traveling and caving background.

“We like names that mean something to us on a number of levels,” he said. “In Wales, where I’m from, there’s a Brecon National Park that’s kind of a wild, windswept sort of place. Before I got heavily into the wine industry, I explored, mapped, and discovered quite a lot of the caves in the Brecon Beacons which are underlain by a big band of limestone, and caving is also how I met my wife.”

Before settling in the area, the Grindleys looked long and hard for their ideal vineyard and winery property. With the help of friends and silent angel investors, Simon and Anna Hackett of Australia, the Grindleys started Brecon Estate in 2012. Situated along Vineyard Drive on the Westside of the Paso Robles wine region, Brecon Estate boasts calcareous soil and the influence of the nearby ocean fogs.

“Being a cave explorer, I couldn’t go and buy a winery that wasn’t on calcareous soil. It’s calcium-based like the limestone in caves and it’s amazing for vines,” Grindley said. “When I go back to England to the caving regions of my youth, I literally drive onto the limestone and get this tingling down my neck. I drive into Paso and get the same feeling. Plus, I have cool British blood, so I like being down near the coast. We were trying to get as close to the ocean as possible and have that cooling influence of the fog while still having our roots firmly on a South facing slope on the calcareous soil. Some of the best regions in the world are planted on calcareous soil – Champagne, Cotes du Rhone, Saint-Emilion, pretty much the whole of Italy, Coonawarra in Australia. If you like wines that come from a calcareous soil and the minerality that comes with that, and the great acids, and the age ability, Paso is Ground Zero for that.”

Grindley calls the late Art Norman, the original property owner, “quite the visionary” when it came to planting Bordeaux varietals of Cabernet Sauvignon and Cabernet Franc.

“We have the oldest of both of these vines in Paso,” he said. “We often hear about the old Zinfandels, but there’s very little old Bordeaux. He was right at the forefront with these plantings.”

There are currently about 25 acres planted on the 40-acre Brecon Estate parcel – 14.5 acres of Cabernet Sauvignon, 5.5 of Cabernet Franc, 1.5 of Tannat, 3.3 Petit Verdot, and 1.3 of Malbec. The influence of the coastal fog makes for long hang times for the grapes, which allows the fruit to get past many of those green notes generally found with Cabernet, Cabernet Franc, and Bordeaux varietals.

“So, what you’re left with is something that is really, truly flavor ripe,” Grindley said. “We can make an excellent Meritage from this property and, stylistically, these are old vines so they don’t necessarily have the color of a modern clone or the structure but they are just way more complex. They have a broader spectrum of flavors because every vine and every bunch is in a different stage of production and it just comes out as way more interesting in terms of the wines.”

At Brecon Estate, there’s an international flare when it comes to the winemaker and his wines. Grindley grew up in the United Kingdom, studied winemaking in Australia, and traveled extensively making wine throughout the United States, Europe, and Australia. That international influence shows in the winemaking and, with Amanda’s Australian heritage, in the buildings as well.

“There are a lot of influences we have picked up from all over the world,” he said. “It’s not about trying to make a wine from France or a wine from Australia. We pick up a few ideas here and there and try producing different things. I think it prevails in a lot of our decision making.”

And just how does Grindley and the team at Brecon Estate manage to deliver award-winning wines year after year?

“Some wineries are known for one or two good wines,” he said. “The trick, though, is having everything you make be good across the board; that’s actually harder than making that one great wine. Again, it’s that international experience I’ve gained working in a bunch of different climates and regions. And it’s also about not growing too big too quickly; keeping those small, little, interesting parcels and not trying to double the productions every year. We find an interesting parcel, we make it. If there isn’t any more, we’d rather go make another small, interesting parcel of something else and keep that small parcel its own size and not try to expand it.”

For that very reason, guests will likely find a different lineup of wines in the tasting room each time they visit. Grindley makes about 12-14 small parcel wines per year.

“We always have new releases, so we are constantly setting down one and opening another,” he said. “The lineup changes at least once monthly for the wines we taste.”

Two of the newer wines Grindley is most excited about are the 2018 Reserve Cab Franc, which recently took Best of Class Double Gold at the Central Coast Wine Competition, and the 2018 Mourvèdre Adelaida, which garnered 96 points from Purely Domestic Wine Report.

“It’s the first time we’ve done a Reserve Cabernet Franc off our property,” Grindley said. “It’s taken us eight years to get our vineyard into shape so that we are comfortable enough to bottle it as a Reserve. And the Mourvèdre is just one of those wines you constantly want to reach for. When you taste it you think, ‘That was really nice’. Then, a minute or two later you think, ‘Oh, I’d actually like another glass’. And then, a little later…the bottle is empty! These two are both really blowing me away at the moment.”

Visit Brecon Estate and become part of the family while sharing small batch wines with friends. The knowledgeable and friendly tasting room staff is welcoming, with Amanda setting the tone with her laid-back, Australian style. Sitting on couches in the patio area just outside the tasting room, guests are treated to views of the old vines and oak trees surrounded the property. Want a more formal tasting? That can be arranged as well.

“Here at Brecon, it’s just a relaxed, casual experience with some damn good wine,” Grindley said, “and the knowledgeable staff are there if you need them.”

About the author: Reporter Meagan Friberg

Meagan Friberg is a reporter for the Paso Robles Daily News and A-Town Daily News.

Home Videos The WORLD of WINE – Wine News. Cheap wine, tasting notes and cooking with wine The World of Wine – May 2021 … END_OF_DOCUMENT_TOKEN_TO_BE_REPLACED

How to visit Napa Valley on a Budget. In this video Carson and I explain a few ways to enjoy Napa on the cheap. Tip and advice about how to visit Napa … END_OF_DOCUMENT_TOKEN_TO_BE_REPLACED

Home Videos Get To Know Argentina Wine | Wine Folly If you love Malbec, Argentina is your ultimate wine region. But that’s not … END_OF_DOCUMENT_TOKEN_TO_BE_REPLACED