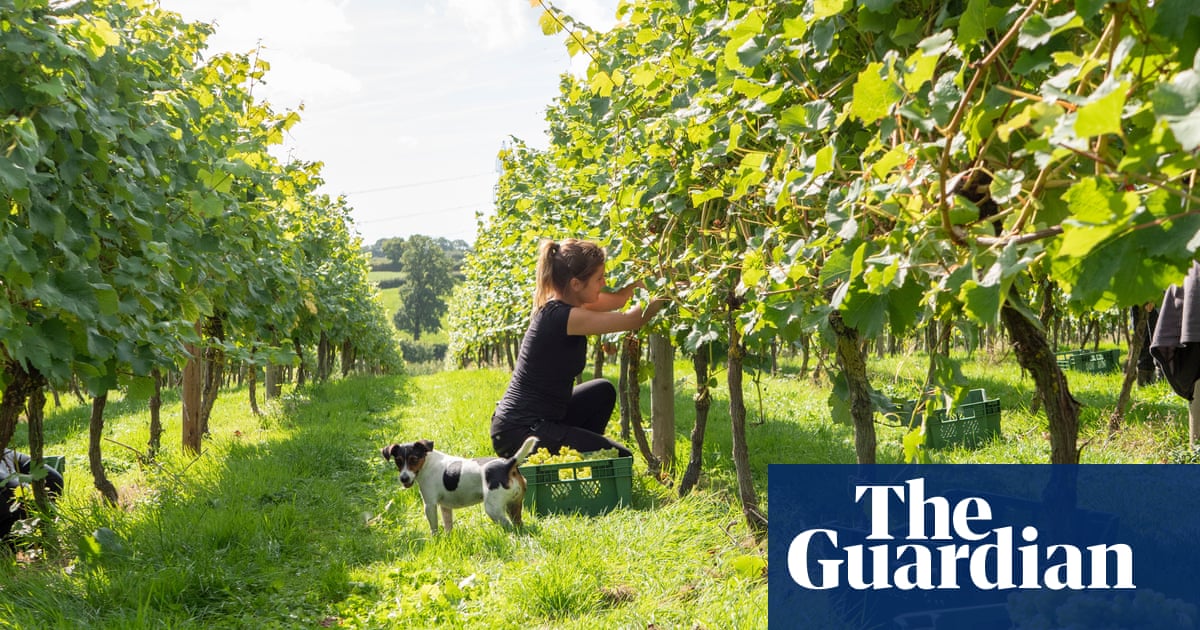 On a hot morning in Devon, a single field stands as a barometer of climate change. Charlie Brown, 30, an assistant winemaker at Sandridge Barton vineyard, explains that the site in which they will soon start planting pinot noir, chardonnay and pinot meunièr wine grapes would once have been considered unsuitable for growth.

“The climate has changed. When you are the top of that brow the wind does rip through it a bit but we can plant here now,” he says.

The plot of land will become the focus of “Dijon clones 114, 115, 667 and 777”, he says. “These are clones that we now feel are suited to help us continue making world -lass pinot noir. Previously we had to use champagne clones due to the climate.”

The vineyard in Totnes is one of many across England to have used increasing temperatures year on year to their advantage. This summer is following the trend, with 36.4C recorded on the hottest August day for 17 years. Recent research showed the likelihood of the UK experiencing 40C temperatures for the first time was “rapidly accelerating” because of the climate emergency.

“Traditionally England was a hard region to ripen grapes as it was not warm enough,” says Greg Dunn, head of the wine division at Plumpton College, which runs land-based courses, “but in the last 10-15 years temperatures have increased to such an extent that we can now grow a number of grapes and make outstanding wines.”

In 2018, they had one of the warmest years on record. “The land used for planting grapes has increased substantially in the last five years and in the next three to four years we expect to go from 3,500 hectares up to 6,000 hectares of vines.”

England’s position in the wine market has been cemented in recent years with Taittinger becoming the first champagne house to plant vines in the country, closely followed by Champagne Pommery. A total of 1.6mvines were planted in 2018 and 3m vines in 2019.

In Totnes, the humidity in August this year was perfect for growing. “If it starts getting really hot then the grapes ripen early and won’t produce that character we want – then the sugar levels start getting really high and we’re not looking to produce a really overripe jammy Pinot Noir.”

Changing climates, however, also bring weather unpredictability. “The growing season was fantastic in 2019 and we had really good flowering … But then when harvest came around the middle of September, the floodgates just opened. It rained and it didn’t really stop. So basically the grapes just stopped developing and you weren’t getting any phenolic characters coming through. They’re picking up water and they saw the disease come in. It’s a case of picking quickly as opposed to picking when you think the grapes ready,” Brown says.

And while parts of England have benefited, vineyards in other countries have experienced increasing challenges due to the climate emergency. “Places are having trouble keeping on top of ripening and sugar levels in certain parts of South Australia,” says Tom Wedgery, the vineyard’s retail and marketing manager. “Some of the more exposed places where they produce high volume wine are struggling.”

Dunn says that there is overwhelming awareness within the industry that English vineyards need to do more to reduce their carbon footprint.

Vineyards are reducing the amount of water and pesticides they use, he said, as well as trying to reduce the effect of packaging on the environment by picking bottles that don’t involve so much waste.

“Soil erosion is going to be problematic in the future so how we manage vineyards in terms of that is [another] big component of the sustainability programme,” he said.

Home Videos The WORLD of WINE – Wine News. Cheap wine, tasting notes and cooking with wine The World of Wine – May 2021 … END_OF_DOCUMENT_TOKEN_TO_BE_REPLACED

How to visit Napa Valley on a Budget. In this video Carson and I explain a few ways to enjoy Napa on the cheap. Tip and advice about how to visit Napa … END_OF_DOCUMENT_TOKEN_TO_BE_REPLACED

Home Videos Get To Know Argentina Wine | Wine Folly If you love Malbec, Argentina is your ultimate wine region. But that’s not … END_OF_DOCUMENT_TOKEN_TO_BE_REPLACED