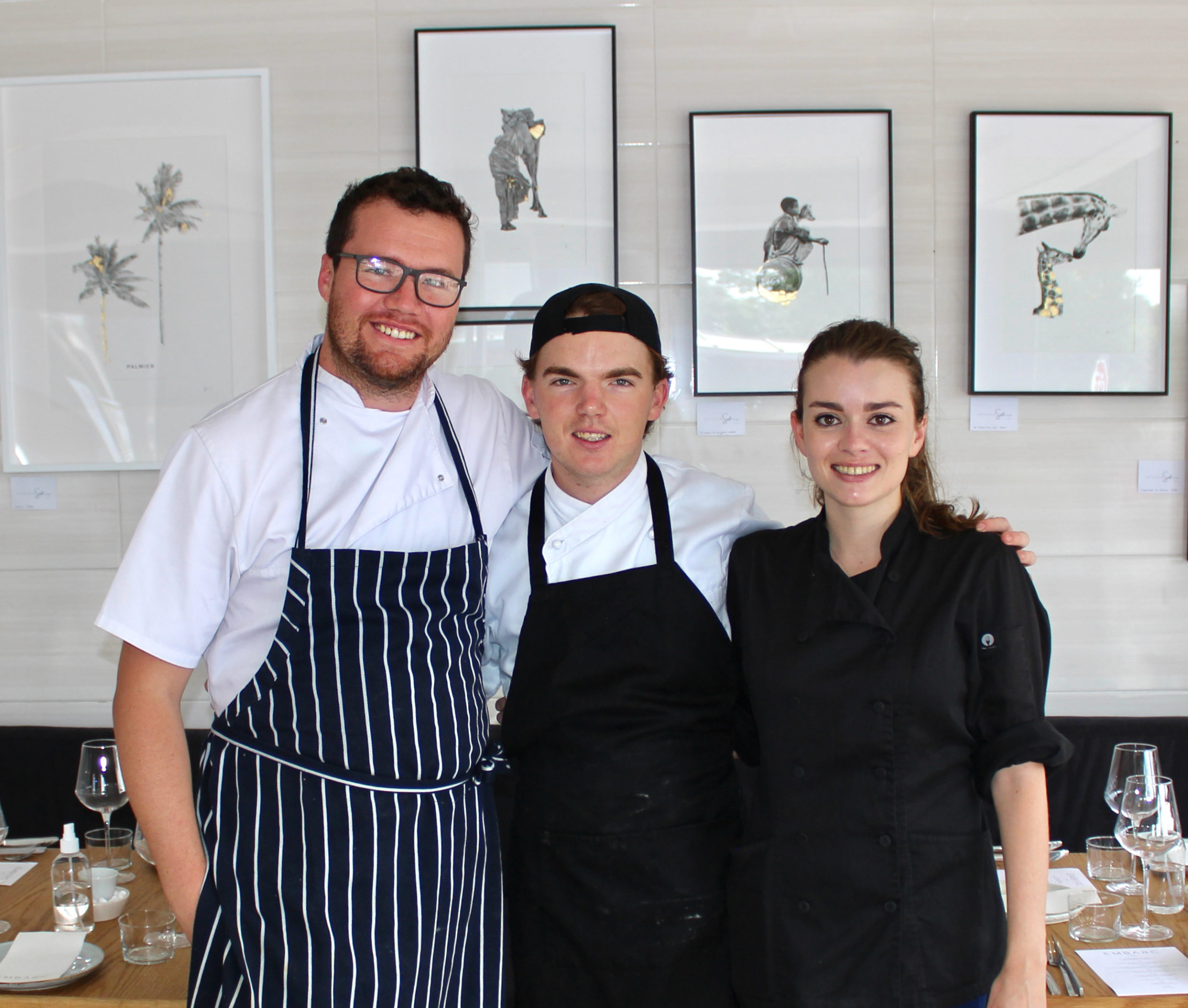 Darren O’Donovan and Lisa de Beer opened their own restaurant, Embarc, on a beautiful glassy, airy corner of Parkview, just as Covid retightened its grip and booze was banished.

The writer supports Nosh Food Rescue, an NGO that helps Jozi’s soup kitchens, shelters and feeding schemes with food and produce “rescued” from the food chain. Please support them here.

Darren O’Donovan and Lisa de Beer started out long ago. Together. After a momentous trip through standout Jozi restaurant kitchens and their own voyage of discovery, they arrived at a time when a pandemic raged and to a place where a fire did just that too. Nevertheless…

You may as well hand it to Darren and Lisa: the Gonna Win Through prize for enthusiasm, survival and sticklerdom. I wave to them through the glass entrance, somehow relieved that they’re truly here and observing that it is wonderful.

Darren is one of Jozi’s first-class, topmost-rung chefs and Lisa a sommelière with art, sass and nous, who’s also a chef. And there’s Mitchel du Plessis who was trained by them at their first major port of call, which was Cube. He’s rejoined them at Embarc as sous chef.

Chef Dario de Angeli’s Cube was a fine dining kind of theatre, a blank space, rectangular, rather than cube-shaped, with coloured lights sometimes and one of the first of the long-long-degustation dinner places. It wasn’t all show. The food, presented as carefully and personally as it had been conceived and created, often according to a theme, was presented by the chefs themselves, a trio of whom stood or gave last touches, in between acts or courses at a finishing station, halfway between the tables and the kitchen. There was no doubt that they were the culinary stars. That is where I first met this star, Darren.

One of the great things for us punters, at least, was that Cube wasn’t licensed. We soon worked out that, even though wine pairing suggestions were made and sent with your menu when you’d booked, it was easier to take a bottle or even a magnum of great South African champagne, working on the principle that “it goes with everything”. BYO also nudged that very special food experience into the affordable range. When you could get a booking. They were often a couple of months distant.

Darren today looks remarkably similar, though very much more casual in an apron and shorts, as we talk about black garlic and its inimitably caramelly edge and how to make it yourself, as he does of course, and especially if you don’t have the normally prescribed months in which to age it.

He shudders comically at the mention of “fine dining”. That’s really what Embarc’s standard of food is, just without the white jacket and cloths, the strict cutlery and without the emphasis being on super-arty presentation. The food looks as though you really want to eat it, rather than worry about disturbing it. He wants another phrase for “fine dining”. I think the world does too. It has brought about silly associations and skewed expectations.

I really want to eat some kataifi prawns I saw being walked by. They looked crisply-fuzzily friendly and even worthy of being hand-held. And I  also want to eat a mushroom tortellino that features “Almond. Beurre Noisette. Black Garlic” in what is hardly a description, on contemporary menus. However, I prefer this way to the old floral or purple dish descriptions and it has me anticipating how the mentioned ingredients or inclusions would be employed, before it all arrives, always as a surprise.

I’m beginning to realise that, to dodge the “fine dining” or strict degustation mode of eating, Embarc’s menu has a Snack section and has the menu cleverly worked out after that. Snack’s not a fine dining word but I see some of the food there certainly is. It’s agreed by VIP chip experts that Urbanologi’s “best chips” or “fries glory”, as under chefs Angelo Scirocco and Jack Coetzee, never afraid of serving chips as if they were the absolute ultimates, has passed to Embarc. They are under the Snacks heading and so are my kataifi prawns (Tom Yum. Coconut. Soya).

The other dishes are all under Savoury, in Starter or Main sizes, or Sweet.  You see? You can make up a tasting menu yourself. And the ponytailed sommelière, Lisa, is ready for you to have fun with any wine pairings. Cunning.

There’s some appeal in menu making, especially since the prawns have now been personally wolfed. The Tom Yum part was hiding in a madly exciting kind of edible sponge texture, gentle against crisp kataifi and the pair of two-big-firm-bites prawns. Deep tastes. Easy eating.

So, before that tortellino, I can fit in a starter version of springbok. It’s served carpaccio style, soft and moist with a fig-and-beer reduction that floors me. The venison-and-beer idea of South Africa inspired the dish. There’s a yeasted yoghurt and something I’ve done with less than desirable results, popped sorghum. In Darren’s dishes, I like to search and find his crunch or crisp something that offsets creamy, soft, melting textures. The crunchily popped grass seed does it here. In the company of Parmesan curls and a flitter of rocket. The kataifi obviously did it with the prawns.

Parsnip crisps do it with my mushroom tortellino, a dish I find myself eating with eyes closed in pleasure. It is autumnal umaminess upon umaminess.

Darren and Lisa, after Cube’s heyday in Parktown North, ran the “fine dining” section of the preserved and artily filled old Cosmopolitan hotel in Maboneng. There were Crystal Birch hats upstairs, a great art gallery up there too, one of my best coffee places in the garden, itself a masterpiece and then the Cosmopolitan restaurant. I visited them there for glorious tastes on the fine dining side of things then.

There were working challenges. The place was a very old tavern, with a gateway for coaches, that led into the bar area full of carved lions. The rest, the restaurant, was a warren of repurposed rooms, with the patisserie I remember being stuck out on its own.

That was before Darren and Lisa left South Africa for their own food travels for a couple of years, across as many tasty countries as they could fit in. Lisa would say that the travels and travails taught them to keep their eyes open and to “stay learning constantly because you can absolutely never know it all”.

I lost the two for a bit. I’d missed them as well, when I’d heard they’d done excellent things at LBV in Cramerview, always pretty well known for wine pairings anyway.

No one could miss them when they arrived at Aurum, not called that for nothing. It’s possibly the restaurant, at the long-stay sort of hotel accommodation, the Michelangelo in Sandton, with most high endedness and gilded wallets. I tried to, though it was not Darren and Lisa’s presence I wished to dodge.

I reflect on that, while I enjoy an Embarc starter version of ostrich fillet. It’s its SA-influence Malay Pumpkin Wontons that wins me over, along with mango chutney. And cashews, would you believe, for that O’Donovan crunch. The delicious memory that will linger is the more natural gold of those wontons, the ginger in the chutneyed mango. If I feel I could eat this food at Embarc forever, I am sort of doing that. I arrived early and it is mid-afternoon.

I guess I haven’t done Lisa very proud. I ordered a Miles Mossop chenin. It’s called The Introduction and I wanted it mainly because it was Mossop’s but Lisa did say it was pretty versatile and downright delicious. It is both, well proven by taking me through all I’ve eaten, even if as only one glassful. She’s made fascinating suggestions to me for all the Embarc dishes anyway.

Darren and Lisa really did open their own restaurant on a beautiful glassy, airy corner of Parkview, just as Covid retightened its grip and booze was banished. Against all odds, as usual, even the curfew worked against them. But it’s not as though the new place was empty. They had many excited eaters coming here.

The emptying was done for them by a fire that raged through the building, not exactly burning the walls and furniture of the restaurant section, but sizzling all electrics to nothingness. I’d promised myself a trip to Embarc the next day.

Hardly hungry, speaking with Darren, I laugh about a dish under Sweet, called Peaches & Cream. It is, as he says, an idea based on nostalgia for a really South African Sunday lunch pud of Koo canned peaches and Ultramel custard that everyone adored. Maybe I didn’t. But he brings me an Embarc version to taste. The ice cream is made with that custardy Ultramel in the real custard mix. Juicy, dark orange, full-taste Kakamas peaches are grilled. Though there is no other malva on the menu, there is a soft and perfect piece of malva pudding with the peaches. The O’Donovan crunch is courtesy of a very crisp homemade shortbread biscuit.

I eat it all. It’s now part of the memory of their long journey and my own not-so-short Embarc trip.

And I know the two, with their restaurant, are mightily respected by their top Jozi peers. I’ve heard some of it first-hand. They’ve arrived. DM/TGIFood

Home Videos The WORLD of WINE – Wine News. Cheap wine, tasting notes and cooking with wine The World of Wine – May 2021 … END_OF_DOCUMENT_TOKEN_TO_BE_REPLACED

How to visit Napa Valley on a Budget. In this video Carson and I explain a few ways to enjoy Napa on the cheap. Tip and advice about how to visit Napa … END_OF_DOCUMENT_TOKEN_TO_BE_REPLACED

Home Videos Get To Know Argentina Wine | Wine Folly If you love Malbec, Argentina is your ultimate wine region. But that’s not … END_OF_DOCUMENT_TOKEN_TO_BE_REPLACED