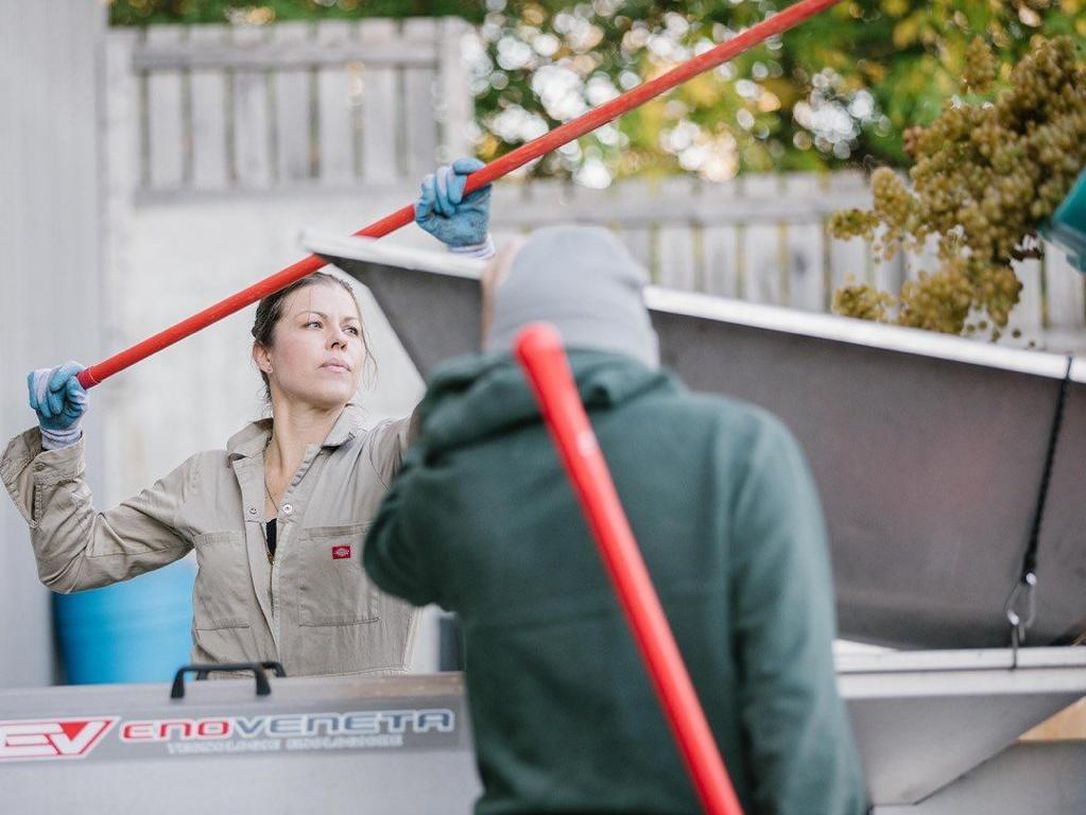 Lydia Tomek, former winemaker at Ravine Estates Vineyard, is one of the winemakers to produce a vintage for Fourth Wall Wines, a virtual winery that produces collaborative vintages.

By Tiffany MayerSpecial to the Standard

There are people who love Niagara.

And then there’s Joel Wilcox.

He loves Niagara in the most altruistic of ways. The sommelier, who was born in St. Catharines, raised in Niagara-on-the-Lake and now lives in Burlington, wants the region that reared him to succeed. To be revered by others the way Wilcox, himself, adores the area.

He’s doing it one singular wine vintage at a time with his virtual winery Fourth Wall Wines because if a rising tide can float all the boats, a vintner dedicated to showing off Niagara’s finest in a glass can make our collective cup runneth over.

“I love Niagara, I love the idea of the Ontario wine industry and what it can do,” Wilcox said.

Fourth Wall Wines is a “nano-batch” winery turning out bottles made collaboratively with different winemakers and different vineyards.

Take Fourth Wall’s first release, a 2018 Cabernet Sauvignon made with grapes from Riverview Cellars Estate Winery and the hands of the winemaking team Alyssa Bator, Nick Salvatore and Fred DiProfio.

It’s since been followed up with a Sauvignon Blanc and Riesling made with fruit from Ravine Estate Vineyards and winemakers Lydia Tomek and Eden Garry. There’s also a Gamay Noir called Meta composed by Shiraz Mottiar of Malivoire Wine Co. with grapes from four vineyards selected for their energy and intensity.

“Why do something with one partnership?” Wilcox said. “If everyone is willing to work together, why not shine a light on everyone and raise the profile of the whole industry?”

Wilcox fell into championing Niagara wine in the most Niagara way possible. He worked at Riverview Farms fruit stand in Niagara-on-the-Lake in high school, which eventually transitioned to Riverview Cellars.

Wilcox was 18 when Riverview got its winery licene and had an in for a job after his performance minding the fruit stand. Working at a fledgling wine producer gave him the chance to learn the intricacies of a winery from the ground up, and grow up along with it.

He never forgot his vinous mentor, even when he went to university to study English literature and considered a career in academia.

(The Fourth Wall moniker is an homage to his favourite postmodernist literature and the imaginary line separating the real world from the fictional one that’s sometimes broken by characters to provide audiences with more context. In wine’s case, it’s the character breaking the fourth wall to speak to and connect with the drinker. Besides, Wilcox is certain Wilcox Cellars wouldn’t have the same cachet).

Despite his love of literature, he loved wine more and traded ivory towers for wine cellars by training to become a sommelier.

His career has included time at the storied Canoe restaurant in Toronto and his current stint as an account manager and sommelier for Woodman Wines and Spirits. All in, his professional career and that high school job gave him intimate knowledge of the wine industry, including insight into some of Niagara’s best lots for grapes, even the best barrels for aging them.

It was at Canoe where Wilcox dreamed up doing small, exclusive bottlings that would tap into the grapes and winemaking skills at different wineries. It wasn’t until a few years ago, over dinner with Mike Pilletteri from Riverview, that he put his idea out to the universe and a guy who responded in the most Niagara way.

“First thing he said was ‘That’s awesome, how can we help?’” Wilcox recalled. “This is the way it is with lots of folks in Niagara. If you know someone and have a good relationship, we always try to see the positive.”

The plan was to make “really cool bottles that are going to be a limited run,” honing in what can be achieved in Niagara’s climate and vineyards. The alcohol would tend toward the lower side; the acid would be high. Oak would be restrained and gentle, and the fruit teased out to shine a light on the different sites of origin.

“The wines highlight vineyards, the strength of a winery and steering the wines toward what I think are really great examples,” Wilcox said. “It has to be authentic of this place.”

It hasn’t been a hard sell with the wineries and winemakers with whom he’s worked. Collaborations are rooted in a conversation and long-standing friendships, and a global pandemic that’s underscored the need to support each other — especially in the hospitality industry.

Ever the English lit student, Wilcox gives credit where it’s due, naming the winemaker, partner winery and vineyards involved in every vintage.

“When I’ve approached this with anybody, I let them know the other wineries involved. It’s not about jockeying to be the best winery in Ontario. It’s about making great wine and being recognized for that. Overall as a region, if we’re going to make it, we’re going to make it together,” Wilcox said.

“There’s a lot of goodwill and a lot less ego than there might seem to be,” he added. “When people market things or brand things, there is a perception of ego but people are more than happy to help each other, especially in this climate.”

Ever the admirer of Niagara, he does it all to give the region that gave him so much the dues he feels so strongly it deserves.

“It’s a point of pride to give back to the area where I’m from. Not every area makes wine, not every area makes good wine and we’re so close, in the physical sense … to a region that’s developing its identity as a winemaking region,” Wilcox said. “Overall, it’s an exciting place to be. There’s lots of changes and quality improvements and lots of excitement. Once we get out of COVID, there’s more reason to get out and explore it.”

Tiffany Mayer blogs about food and farming at timeforgrub.com. twitter.com/eatingniagara

Home Videos The WORLD of WINE – Wine News. Cheap wine, tasting notes and cooking with wine The World of Wine – May 2021 … END_OF_DOCUMENT_TOKEN_TO_BE_REPLACED

How to visit Napa Valley on a Budget. In this video Carson and I explain a few ways to enjoy Napa on the cheap. Tip and advice about how to visit Napa … END_OF_DOCUMENT_TOKEN_TO_BE_REPLACED

Home Videos Get To Know Argentina Wine | Wine Folly If you love Malbec, Argentina is your ultimate wine region. But that’s not … END_OF_DOCUMENT_TOKEN_TO_BE_REPLACED