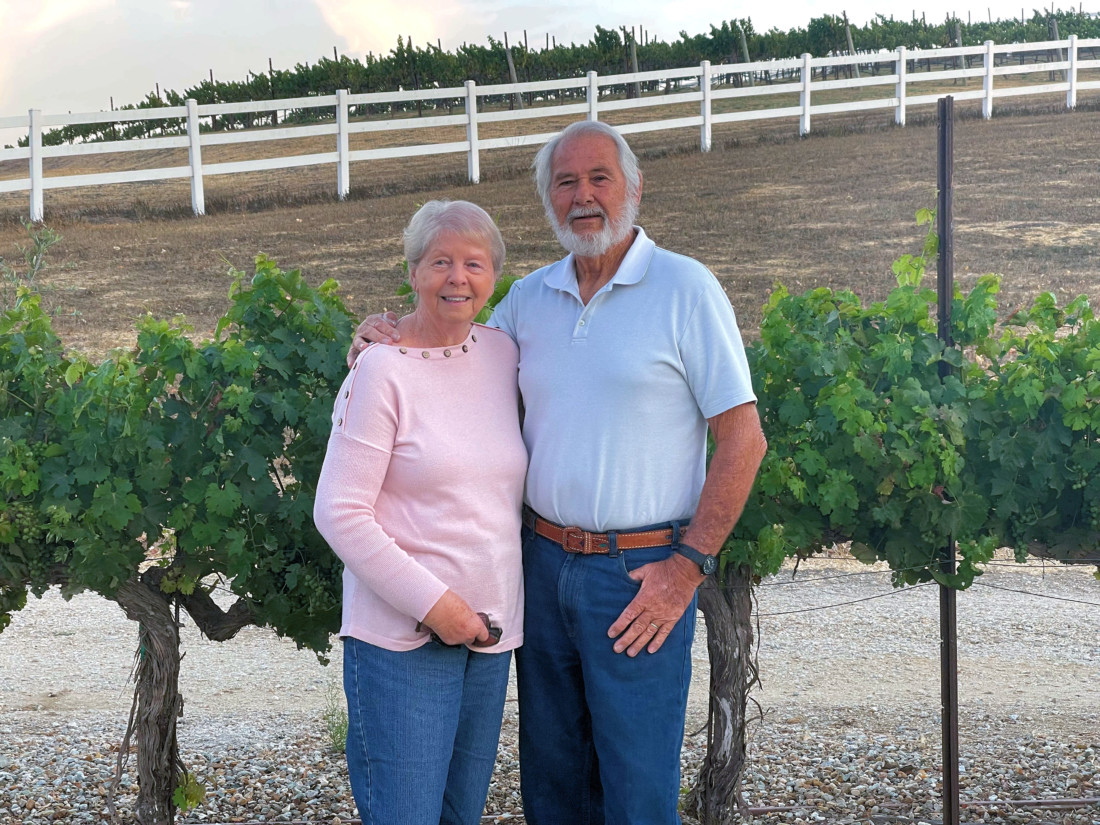 Located on the site of Hollister’s old Cetani Vineyards, it’s not surprising that AnnEugene Wines’ cabernets and merlots are superior wines. What is surprising is that the winery is owned by a retired couple in their 80s, Joyce and Richard Kline, who have not had a drink in 38 years and have never had a glass of their own wine. It does not stop them, however, in their pursuit of excellent vintages.

“We knew someone who was having a problem with alcohol,” Joyce said. “We said, ‘You live up to what you need to do and we will not have a drink as well, or anything stronger than coffee.’ That person stayed sober and is now very successful, so that makes us happy.”

That does not stop them from tasting the wine to check on it when needed and both are involved in making sure the product going out is worthy of their name.

And as a family winery, name matters to them. “AnnEugene” is derived from family middle names: Richard and their two sons share the name “Eugene,” Joyce and their two daughters share “Ann.”

The Klines bought the vineyard by chance in 2017 when they were looking for properties in the Hollister area.

“We were looking for a rental property downtown,” Joyce said. “We were driving out of town and saw an open house going on at this property. A month later we moved in. We are retired general building contractors and we did not know anything about running a winery.”

One of the first people they called was Pat DeRose of DeRose Winery, who advised them on how to handle the existing barrels of wine that remained from Cetani and then examined the vines, assuring the Klines that they were healthy.

The next step was hiring their winemaker, James Jelks, through a chance recommendation from their doctor. Jelks has a degree in enology & viticulture from UC-Davis and has worked at wineries in California, Oregon, France, New Zealand and Australia. He founded his own winery, Florèz Wines in Santa Cruz, the same year he started working with the Klines.

“Our doctor’s daughter went to school with James,” Richard said. “We were talking to him about what we were doing and he said, ‘I think I have a winemaker for you.’ He sent us his resume and it had him in the field, in the laboratory, and in the vineyards in four different countries. I liked him and I still do. He is a perfect person for us.”

Jelks has enjoyed his time working with the Klines, helping them find their direction at the winery.

“They are such pleasant people and it is amazing how prolific they are, being in their 80s,” he said. “They are willing to get their hands dirty. They don’t have a ton of knowledge in the wine world but they do a great job regardless of that.”

Jelks has an interest in wines with no artificial additives and is working to adapt his style to the vineyard.

“The wine is going to be as good as the fruit is so you don’t want to get in its way and fuss with it,” he said, “I am inspired by the European wines so the cabernet franc is intended as a light, pretty wine. I am getting to understand their clientele a little better now, so I might start making a richer style of wine, but I think we are making good, solid wines now.

The winery sits on five acres with just under two acres of grapes. The vines, cabernet sauvignon, merlot and cabernet franc, were planted by Cetani and produce a healthy 5 tons each harvest.

The bottling is done on-site with a six-spout machine borrowed from Jelks, a borrowed labeler, and lots of volunteers to help cork and seal the wine.

Two of their current wines, a cabernet franc and a blend, were from grapes harvested before the Klines bought the vineyard. Earlier this year they released their 2018 wines, the first made completely under their control.

The Klines sell their wine only at their tasting room at the vineyard, which is open on alternating weekends. I was able to taste three of the wines they have in stock. The 2015 Cabernet Franc was unavailable to me due to a short supply. However, bottles may become available at some point to guests at the winery.

The wines of AnnEugene Wines

2018 Awe Estate Cabernet Franc ($25) The bountiful aroma leaps out of the glass with a scent of fruit and a hint of herbs. The scent telegraphs the taste of the wine: full of fruit, medium-bodied and very smooth with notes of cherries and black pepper. A slightly delicate wine, you would not want to serve it with anything that would mask the joyful complexity of the fruit. I would pair this with something that would not challenge it for your taste buds, like grilled pork or fettuccine alfredo. It’s very easy to drink, with a touch of sweetness at the start and dryness at the finish, and it would be a fine wine to serve before dinner with appetizers or just drink on its own.

2015 Awe Estate Bedazzled Red Blend ($12) A deep, rich blend of cabernet sauvignon, merlot and cabernet franc. The aroma brings out the cabernet and the tannins and the flavor is dark cherries and roasted peppers. The blend is perfect; the characteristics of the three grapes are apparent in the wine but there is nothing overstated or assertive. It’s ready to drink right now and is a perfect dinner wine. It almost begs to be served with food, anything from grilled foods to red sauces on pasta to pizza. The Klines are offering this wine as a special through the end of August at $12 a bottle; I would have not been surprised to see it priced at twice that amount.

2018 Awe Estate Merlot ($25) A wine-obsessed character in the film “Sideways,” played by Paul Giamatti, declared he would leave his table at a restaurant if anyone ordered merlot. Merlot sales seemed to plummet immediately thereafter, a phenomenon that is referred to as the “Sideways Effect.” This merlot, I believe, would have won Giamatti’s character over. The aroma is light and floral with just a hint of the tannins. It’s an exceptionally full-bodied savory wine with notes of plums and blackberries. There is a subtle dryness that increases as it nears the finish then fades away again cleanly. This is a beautiful wine and is my pick of the AnnEugene wines.

We need your help. Support local, independent news. BenitoLink is a nonprofit news website that reports on San Benito County. Our team is committed to this community and providing essential, accurate information to our fellow residents. It is expensive to produce local news and community support is what keeps the news flowing. Please consider supporting BenitoLink, San Benito County’s news.

Home Videos The WORLD of WINE – Wine News. Cheap wine, tasting notes and cooking with wine The World of Wine – May 2021 … END_OF_DOCUMENT_TOKEN_TO_BE_REPLACED

How to visit Napa Valley on a Budget. In this video Carson and I explain a few ways to enjoy Napa on the cheap. Tip and advice about how to visit Napa … END_OF_DOCUMENT_TOKEN_TO_BE_REPLACED

Home Videos Get To Know Argentina Wine | Wine Folly If you love Malbec, Argentina is your ultimate wine region. But that’s not … END_OF_DOCUMENT_TOKEN_TO_BE_REPLACED