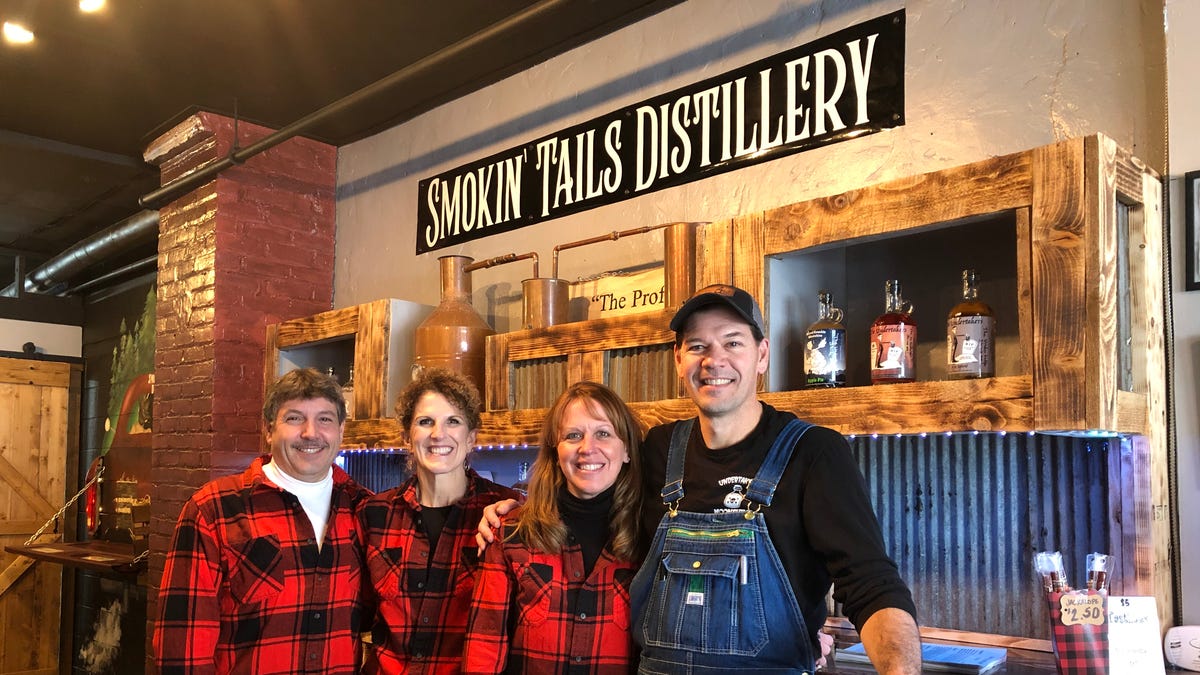 PHELPS — Peter Cheney is just an outlaw at heart.

Cheney owns the Cheney Funeral Home and, thanks to an award-winning appearance a year ago on the Discovery Channel TV show “Moonshiners: Master Distiller,” has the title of master distiller and a nickname, “The Undertaker.” Now, he and his wife, Sharon, partnered with friends Chris and Lisa Orlando to open Smokin’ Tails Distillery in the village of Phelps.

Smoking tails describes the exhaust smoke rolling off the back of a 1940 Ford Coupe carrying shine as the people who made, sold and distributed it illegally outran the law. Later on, many of these spirited drivers took their skills to the oval track, over time building the sport of NASCAR.

“It’s our way of honoring the old tradition of the bootleggers and moonshiners who have gone before us,” Cheney said. “What’s more American than moonshine and NASCAR?”

Cheney, while an outlaw at heart, is legit.

The state and federally licensed micro distillery opened last weekend, and comes many years after Cheney started making wine, first, then spirits, mostly for friends to pass around a jar at the lake or campfire and enjoy.

And that may be how the distillery got its start. Sitting around a fire on the lake — this was before appearing on the show — a jar of moonshine was passed around. Ideas about one day operating a distillery flowed as smoothly as a swig of Cheney’s shine.

So Chris Orlando said he looked into it, and filled out the paperwork just to see what would happen.

“Next thing I knew, he came back and said I’ve applied for the federal license and we got it,” Peter Cheney said.

And that set up a bit of a scramble, as they had to move fast to open — as in 13 days. Fortunately, Cheney’s brother owned the space on Church Street, which once housed a machine shop.

“We went to town and got it done,” Orlando said. “Thirteen days, and now we’re open.”

Making spirits at first was something to keep Cheney busy during off times at the funeral home, but from the minute that first drop of corn liquor rolled off that still, he was hooked.

“I’ve never really been a big liquor guy. I was just more intrigued by the ‘rebelness’ of it — you weren’t supposed to do it,” Cheney said. “The science part of it just always amazed me, that you could take some stuff, ferment it and turn it into liquor. Gosh, that’d be pretty cool. I’d really like to make some good stuff.”

Smokin’ Tails offers bottles of 4 Grain Spirit — the whiskey that wowed the “Moonshiners” moonshiners — Sinister Cinnamon, a corn-based spirit, and Rye Spirit, made with rye and flavored with American oak, under his Undertakers label.

Come to the distillery to pick up a bottle or two. Come for the merchandise. But also come for the tastings, for the fun and the learning experience.

Tiny shot glasses of each are lined up on a gorgeous wood bar.

A tip for the 4 Grain Spirit — let the alcohol first hit the middle of your tongue, which lessens the burn on the front end while keeping the warm feeling as it travels down your throat. Good to know.

Tom Cheney, Peter’s son, gives a warning about the raspberry vodka. It’s oh-so sweet, but this one will sneak up on you if you’re not careful.

“Mix it with some Sprite or 7-Up and you’ve got yourself a drink,” he said. “That one’s dangerous.”

The last in the line is the Sinister Cinnamon, which is sweet on the front end and on the back end, you taste what resembles the old atomic fireball candy.

But before you have your last sample, do this. It’s required (and everybody’s doing it).

Before sampling the last of the group, you’re to twist your hand into what they call a moose knuckle. Raise your hand, yell “knuckle up” and finish off the tasting.

“You’ve got to give a knuckle up,” Tom Cheney said. “It’s kind of like a high five. You have to have something fun for people.”

Peter Cheney said he loves to educate people about moonshine.

Over the years, Peter Cheney has played around with a number of different recipes while distilling in his hearse garage until hitting on the right stuff.

Cheney’s 4 Grain Spirit, for example, is made from New York grains. Corn, of course, and barley and rye are pretty standard ingredients.

But, triticale? Well, that one’s a hybrid of rye and wheat.

Cheney said it’s an underrated but “amazing” grain that he predicts will grow in popularity among distillers.

And he will put this and other New York grains up against any other.

“Anything that can withstand our winters around here and still grow and be an awesome grain, that just says a lot,” Cheney said. “I’m very proud of our New York state grains for sure.”

Eat, Drink and Be Murphy

The Eat, Drink and Be Murphy column explores the region’s bounty of food and drink — and the people who bring it to you — soup to nuts, accentuated with a craft beer or Finger Lakes wine. After all, who doesn’t love to eat and drink? Email assistant editor Mike Murphy at mmurphy@messengerpostmedia.com or call 585-337-4229 with ideas and suggestions.

Home Videos The WORLD of WINE – Wine News. Cheap wine, tasting notes and cooking with wine The World of Wine – May 2021 … END_OF_DOCUMENT_TOKEN_TO_BE_REPLACED

How to visit Napa Valley on a Budget. In this video Carson and I explain a few ways to enjoy Napa on the cheap. Tip and advice about how to visit Napa … END_OF_DOCUMENT_TOKEN_TO_BE_REPLACED

Home Videos Get To Know Argentina Wine | Wine Folly If you love Malbec, Argentina is your ultimate wine region. But that’s not … END_OF_DOCUMENT_TOKEN_TO_BE_REPLACED