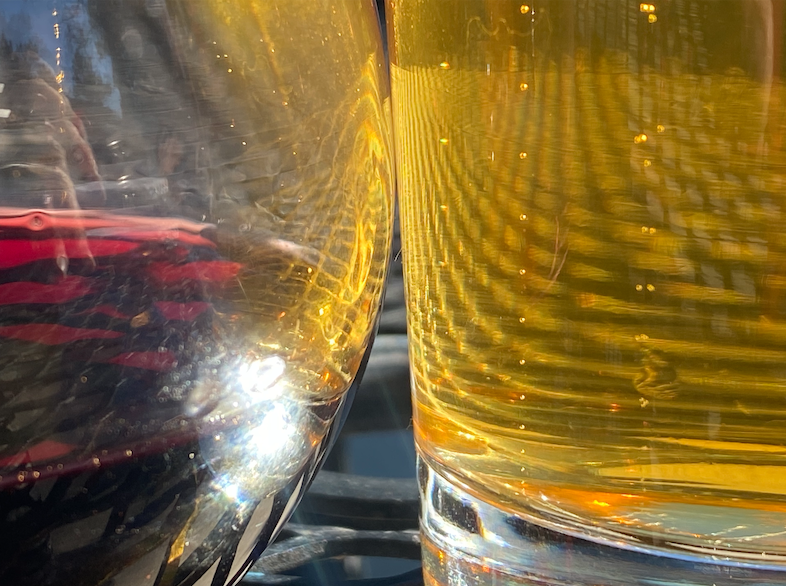 GOLETA, Calif. – If you ever had someone in your group at a craft brewery who only drank wine, the answer to that frustration, has now been uncorked.

Under a newly signed law by Governor Gavin Newsom, AB1825, breweries can now make and serve wine side-by-side in the same location. It authorized a change in the regulations for alcoholic beverages.

Draughtsmen Aleworks in Goleta has the first of several releases now on tap. Bottling one at a time is available, but larger quantity purchases will begin soon.

The co-mingling of the two industries comes in a state with more wineries and craft breweries combined than any other state in the nation.

Draughtsmen has entered in new business venture with co-owners Tami Snow and Scott Stefan teaming up with local winemaker Brian McKinnon. They are producing under the label Star Pine Cellars.

Draughtsmen Aleworks makes this business move five years after it first started as a small craft brewery in a cul-de-sac location off the Goleta beaten path on Santa Felicia.

McKinnon says the grapes are sources from local vineyards.

The taproom is pouring by the glass or filling re-fillable 750ml bottles for to-go purchases. They call the wine growlers.

The next step is a full bottling and labeling process with the Star Pine label and selling in larger quantities.

He expects the process of wine and beer in the same site will be an overlap that will be very popular in the future, as opposed to having the process in different locations. “We are interested in making it here and keeping it local,” he said.

Snow says she met McKinnon because he is a member who made wine and gave her a taste. That and the change in the law made the blend possible in many ways. “For us it is pretty exciting. With every beer lover there’s always wine drinkers, and we all happen to be beer and wine drinkers,” said Snow.

One customer who was tasting her first glass, Emily Lacey-Gordon said, “The rosé is incredible.” She describes herself as a “big wine drinker.” She said the rosé was “very fruity, and full bodied.”

Lacey-Gordon came with a friend and they had both wine and beer, “That’s the whole reason why my friend actually ended up coming. It works out very well.”

With the COVID-19 restrictions, the inside of the brewery site could not have customers, and that created space for the wine project.

The equipment they are starting off with is bigger than home wine making systems, but not as large as a bigger winemaker might have.

“We were able to get the rosé and start pouring in about three and half to four months,” said McKinnon.

“(The) grapes are from Santa Barbara County and surrounding areas in Central California,” said Snow.

“We made about 16 barrels worth of wine, and it was pushing the limits of what we had,” said McKinnon. That will be about 400 cases of bottles this year. In that selection will be a Rose, Syrah, Viognier and Pinot Noir.

Star Pine Cellars is operating in partnership with Draughtsmen Wineworks.

Home Videos The WORLD of WINE – Wine News. Cheap wine, tasting notes and cooking with wine The World of Wine – May 2021 … END_OF_DOCUMENT_TOKEN_TO_BE_REPLACED

How to visit Napa Valley on a Budget. In this video Carson and I explain a few ways to enjoy Napa on the cheap. Tip and advice about how to visit Napa … END_OF_DOCUMENT_TOKEN_TO_BE_REPLACED

Home Videos Get To Know Argentina Wine | Wine Folly If you love Malbec, Argentina is your ultimate wine region. But that’s not … END_OF_DOCUMENT_TOKEN_TO_BE_REPLACED