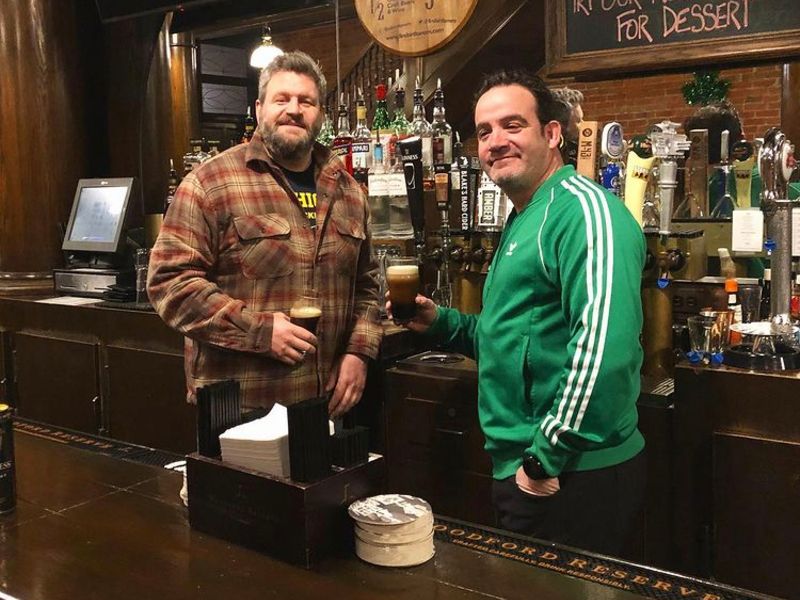 Firebird Tavern co-owners Owen Burke and Tony Piraino see the return of thousands of Rocket Companies Inc. employees to its downtown Detroit offices as a barometer for how the 8-year-old establishment moves forward.

Rocket on Tuesday announced it would start bringing back its 19,000 employees to the city’s central business district on June 7 — 15 months since the state ordered work that could be done remotely be done so during the COVID pandemic. Other large employers were making similar plans after Gov. Gretchen Whitmer said office work can resume May 24.

“We’re fortunate to do a tremendous amount of business with (Rocket employees) coming in day to day, and we also do a tremendous amount of events with them,” Piriano said. “This is going to play a role in how our hours change and if we open more days. Quicken (Loans) is a big catalyst for us. It’s the return of people downtown. With offices being closed, nobody at games, no concerts, there’s nobody downtown.”

Firebird Tavern’s revenue dipped 85 percent since the start of the coronavirus pandemic, he said.

Firebird Tavern at 419 Monroe St. in the city’s Greektown area has operated limited hours since reopening in early February. The business, which opened in 2013, developed an app that launched in September 2020 that allows customers to place pickup orders. Burke said the app was in the works in late 2019, as research found more Quicken Loans staffers opted to eat lunch at their desks.

“(The app) slowly caught on,” Burke said. “We think we’ll get more use out of it as people return.”

Burke and Piraino say they’ll be ready to roll when Rocket and other companies return downtown. They’re looking to get a big boost, too, as stadiums and entertainment venues are able to fill up again starting June 1.

The Firebird Tavern owners hope to expand their hours, which are 3-11 p.m. Thursday through Saturday. They’ll need additional staff before any hours are added, as the restaurant has dropped from 32 employees pre-pandemic to 11, including the two co-owners. Burke said they hope to add 10-15 more staffers, including cooks and servers.

“School will be back in session, employees can send their kids to daycare, work a lunch shift and then pick them up. That extra $300 a week in unemployment (benefits) will go away eventually, too,” Burke said. “We think there’ll be a lot more normalcy starting this fall.”

Detroit Vineyards’ Southern said he’s going to take a wait-and-see approach. His workforce has dwindled from 14 to four over the last year. The business introduced virtual tasting events to stay afloat, Southern said, as he and one other staffer delivered packages to customers. At one point, Southern said he was the vineyard’s lone staffer.

“I make slow moves these days. We’ll see how it goes,” he said. “We’ll expand if needed. I feel like we did a lot of mid-week business with Quicken Loans pre-pandemic. We’ll see if that comes back. If that’s the case, it makes sense to expand.”

Firebird Tavern is expanding in another way. It got approval from the city to add 12-15 seats on Monroe. Firebird Tavern’s indoor capacity is 250 patrons.

“That was never even an opportunity before the pandemic,” Burke said. “No way (the city) would allow anybody to go into Monroe. We’ll build some decking and put some planters out. It’ll be highly visible and good for marketing.”

Southern is still working at about 30 percent capacity in Detroit Vineyards’ 12,000-square-foot space. On May 16, it hosted a spring bottling pickup party for its wine club members, with 84 attending two socially-distanced events.

Piraino believes the current 50 percent capacity limit and 11 p.m. curfew has been a hindrance for his and other businesses. When the move was made to increase from 25 percent to 50 percent, Firebird Tavern gained nine additional seats.

“We’re looking forward to the day we can bring everybody in,” Piraino said.

Home Videos The WORLD of WINE – Wine News. Cheap wine, tasting notes and cooking with wine The World of Wine – May 2021 … END_OF_DOCUMENT_TOKEN_TO_BE_REPLACED

How to visit Napa Valley on a Budget. In this video Carson and I explain a few ways to enjoy Napa on the cheap. Tip and advice about how to visit Napa … END_OF_DOCUMENT_TOKEN_TO_BE_REPLACED

Home Videos Get To Know Argentina Wine | Wine Folly If you love Malbec, Argentina is your ultimate wine region. But that’s not … END_OF_DOCUMENT_TOKEN_TO_BE_REPLACED