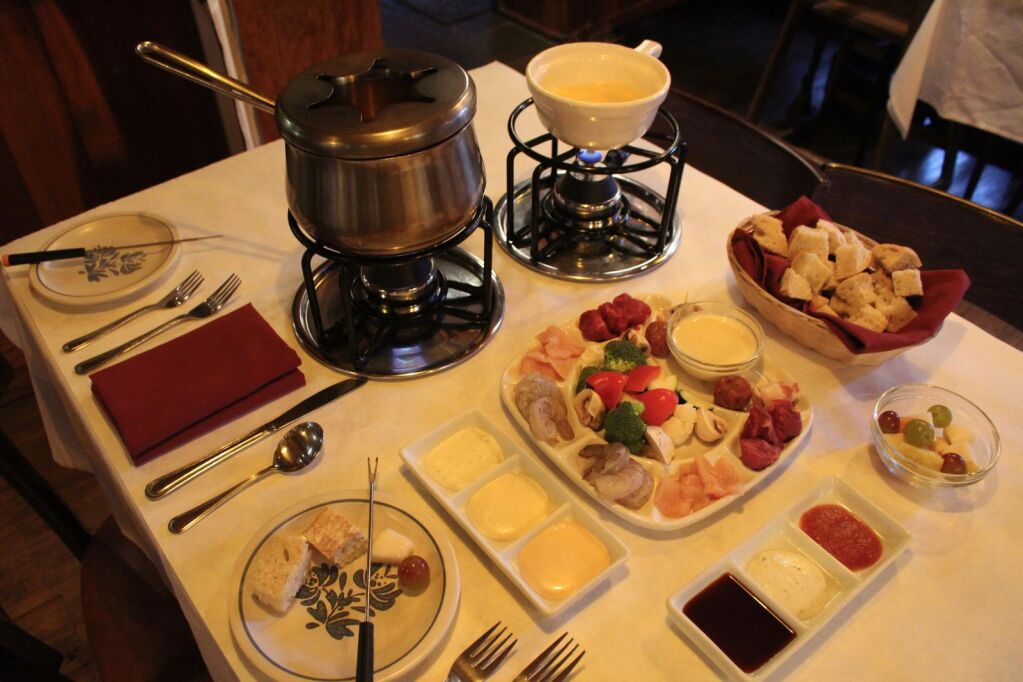 After spending a day on the mountain, there is perhaps no better classic après ski experience than convening with friends around a pot of melted cheese, dipping chunks of crusty bread and sipping on a well-paired wine.

Today, fondue is a staple of Swiss mountain cuisine, but its roots are a little hazy, with the first mention of the dish dating back to around 800 BC in Homer’s Iliad when a woman “as fair as a goddess” melts goat cheese into wine and flour. In the 17th century, a Swiss cookbook author wrote of cooking cheese with wine, which many say emerged from a tradition of peasants dipping bread in melted cheese to make it through winter when food was scarce.

The modern tradition of fondue — derived from the French verb fondre, “to melt” — with wine and cheese heated in a pot over a small flame has ties to the French Rhône-Alpes region near the Geneva border.

However, fondue really began to spread in popularity in the 1930s thanks to a widespread campaign by the Swiss Cheese Union to increase cheese consumption. After World War II, the union continued its championing of the dish, naming it the Swiss national dish and a symbol of Swiss identity.

Luckily for cheese lovers, fondue can be found with different culinary twists and fusions around the world — and it’s even easy enough to whip up at home.

There are countless recipes and cheese pairings used to create fondue. Gruyère, a sweet-but-salty hard yellow Swiss cheese, is the most common, but you will find it mixed with Appenzeller (slightly spicy), Emmental (filled with holes and ranges from mild and buttery to fruity, depending on age) or a number of other hard or semi-hard cheeses. In Americanized versions, you’ll find everything from cheddar to fontina.

At Cork and More in South Lake Tahoe, a gourmet market and deli, owner Karla Brennan grates a mixture of Gruyère and Emmentaler to sell to customers with a simple recipe attached on how to make their own fondue at home.

Brennan’s recipe calls for a garlic clove to be rubbed throughout the inside of the ceramic fondue pot (she recommends the Swissmar brand). Heat a dry white wine in the pot on the stove, then gradually stir in the cheese with a wooden spoon. Once thick and smooth, add a dash of white pepper and a pinch of nutmeg, and set the fondue over the flame in its stand.

Other add-ins one might find in fondue are cayenne pepper, paprika, herbs, mustard or kirsch (a clear brandy traditionally made from morello cherries).

For dipping, the most important accompaniment is a high-quality bread cut into cubes. The Rosemary Sourdough Baguette by local bakery Truckee Sourdough Bread is an unexpected but delicious choice. Either plated individually or on a large serving platter or cutting board, lay out slices of apples and pears, grapes, mushrooms, broccoli, boiled heirloom fingerling potatoes, cherry tomatoes, carrot spears and cornichons (tiny French pickles). For meat, fold in slices of salami or ham.

“I would recommend some nice French wine to go with your fondue,” says Brennan. “Maybe a nice Chablis [Chardonnay] for white or a Beaujolais made with 100% Gamay Noir grapes for a red.”

To elevate the experience, while guests enjoy the fondue, take them through a four-wine tasting starting with white and ending with a light-bodied red.

WHY STOP AT CHEESE?

La Fondue has been serving up fondue in its intimate, wood-filled restaurant in Incline Village for nearly 40 years.

And while the restaurant serves up a simple cheese fondue with bread and fruit, it’s also known for its more-is-more approach to meat fondue, which guests can cook in oil or broth.

“We have chicken, shrimp, lamb, meatballs, steak and scallops,” says Jesus Hernandez, who owns and operates La Fondue with his family.

Take a cue from La Fondue, and set up a second pot for your guest to cook the raw meat in oil or broth, or follow the cheese fondue with a second course of meat to dip in a selection of sauces, like the lemon garlic aioli, horseradish sauce and apple curry chutney at La Fondue. To balance the heaviness of the cheese and meat, offer your friends a small side salad.

If your guests have saved room for dessert (bravo on their restraint), whip up a chocolate fondue and heap your serving platter with strawberries, bananas, pineapple, orange slices, marshmallows and pound cake with a garnish of fresh mint. Or alternatively, keep it simple and pass out a dark chocolate truffle with coffee.

Though the cheese and wine may be hard to pronounce, everything else about throwing a fondue night for friends and family is simple. Whether you choose to serve one course or three, it’s an unexpected and special alpine experience to create in Lake Tahoe.

Editor’s note: This article appears in the 2020-21 edition of Tahoe Magazine, a sister publication to the Tribune.

Home Videos The WORLD of WINE – Wine News. Cheap wine, tasting notes and cooking with wine The World of Wine – May 2021 … END_OF_DOCUMENT_TOKEN_TO_BE_REPLACED

How to visit Napa Valley on a Budget. In this video Carson and I explain a few ways to enjoy Napa on the cheap. Tip and advice about how to visit Napa … END_OF_DOCUMENT_TOKEN_TO_BE_REPLACED

Home Videos Get To Know Argentina Wine | Wine Folly If you love Malbec, Argentina is your ultimate wine region. But that’s not … END_OF_DOCUMENT_TOKEN_TO_BE_REPLACED