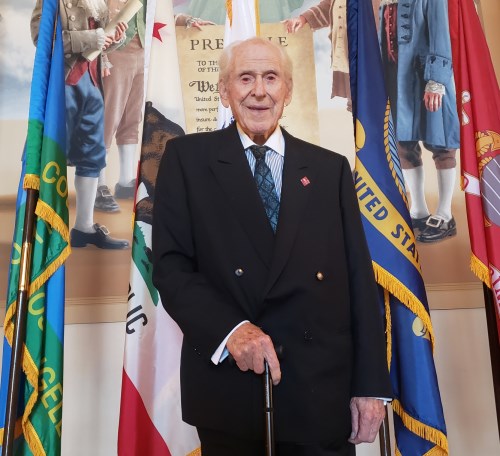 February 26, 1924 – January 28, 2021 Dominick Pizzulli’s story reflects the dreams of many southern Italians at the turn of the century. Dominick Pizzulli was the second of ten children. His father, Cosimo Pizzulli, immigrated from Puglia, Italy, to Greenpoint, Brooklyn in 1910 at the age of 18. Cosimo Pizzulli felt patriotism in his new country and enlisted in the Army to fight in World War I, receiving an honorable discharge on March 10, 1919. After the war, returning to a cold water flat in Brooklyn, where the sole source heat came from bakery ovens on the ground floor, where Dominick spent his early years. Dominick’s father instilled in his children the importance of having an education, as it was his American dream to create a better life for his family.At seventeen, Dominick enlisted in the United States Coast Guard on October 22, 1942 after graduating Murry Hill High School. As a Seaman 1st Class, Dominick was assigned to the LST 16: an amphibious landing ship which transported wounded soldiers and prisoners between Tunis and Sicily. Redirected by General Patton to Normandy; his mission included landing troops and armored vehicles on the French beaches, now known through American history as D – Day. His destination was Omaha Beach, where Germany’s Panzer division attacked marines from high bluffs on the disembarking troops as planes shot from overhead. LST 16 was then called to assist in the invasion & liberation of the Philippines and subsequently carried the US occupation troops for the signing of the end of the war in Japan. Dominick received an Honorable Discharge on November 16, 1945. At the end of his service, was awarded the American Area Campaign Medal, European, African, Middle East Area Campaign Medal, the Bronze Star, Asiatic Pacific Area Campaign Metal, Philippine Liberation Ribbon, Good Conduct Medal and Victory Medal.In November of 2020, Dominick was profiled in Unsung Heroes From The Greatest Generation on the 75th Anniversary of World War II, produced by the County of Los Angeles Department of Military and Veterans. The film will be offered in 2021 for an Emmy Award.https://vimeo.com/477257386Dominick met his bride Rosa Ieracitano when she knocked on the door of his family home in Bensonhurst, Brooklyn. She came to meet the family of First Lieutenant Nunzio Pizzulli, who was killed in combat alongside her older brother Alfred. Dominick and Rose were married October 23rd, 1948. Dominick continued his education, and attended Polytechnic Institute, in New York, receiving a degree in Electrical Engineering. Hired by Ford Instrument Company in 1956, Dominick worked his way from Assistant Engineer to Supervisor. Some notable accomplishments are the supervision and installation of the Jupiter Missile Systems at a NATO base in Southern Italy, followed by work with post war German scientists, at a secret facility in Huntsville Alabama, led by Mr. Wernher Von Braun, in ballistic missile systems. Dominick’s collaboration with this group led to the perfecting the guidance systems for the Jupiter ICBM missiles and Explorer I though a high security NASA program.Dominick’s work, was noticed by Lockheed Missiles and Space Company in Vandenberg Air Force Base. In 1962, Dominick moved his family to Santa Barbara, for a high security position in Lompoc, California.At Lockheed, Dominick’s projects focused on the Gemini – Agena Target Vehicle, an un-crewed spacecraft for NASA focused on space rendezvous and docking techniques, and advanced ICBM missile group guidance systems. During the Regan administration, Lockheed implemented a spy satellite project called “Star Wars” Space Shuttle Columbia in Cape Canaveral, with Dominick achieving top-secret clearance from the Federal Government to provide astronauts on the space shuttle with launch codes.Dominick’s personal life served as a commitment to service. He was involved in the Knights of Columbus as a Grand Knight of the 4th degree, the most prestigious degree, dedicated to church and country, patriotism, veterans and active military, The Order of Alhambra, serving the intellectually and developmentally disabled with vocational skills, and the Serra Club, for the fostering and affirmation of vocations of ministry and service to the Catholic Church. In his retirement, Dominick and Rose continued community service in many charitable organizations, traveled the globe, sharing their stories with family and friends. Dominick enjoyed making wine with his sons and fishing with friends. He was a dedicated father and grandfather, spending his days mentoring and being an integral part of their lives to the end. Dominick is survived by his sons Francis and Cosimo, grandchildren Carolrose, Domenico, Donatella and Angelina, his brothers, Elia Giovanni and Angelo and sisters, Vincenza and Diana.

Home Videos The WORLD of WINE – Wine News. Cheap wine, tasting notes and cooking with wine The World of Wine – May 2021 … END_OF_DOCUMENT_TOKEN_TO_BE_REPLACED

How to visit Napa Valley on a Budget. In this video Carson and I explain a few ways to enjoy Napa on the cheap. Tip and advice about how to visit Napa … END_OF_DOCUMENT_TOKEN_TO_BE_REPLACED

Home Videos Get To Know Argentina Wine | Wine Folly If you love Malbec, Argentina is your ultimate wine region. But that’s not … END_OF_DOCUMENT_TOKEN_TO_BE_REPLACED