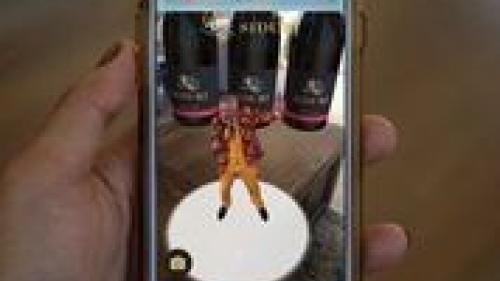 It’s not enough just to compare labels and consider pairings when shopping for that perfect bottle of wine. These days, retail is about the experience, and that’s why Siduri, a California producer of Pinot Noir, is using web-based augmented reality to better connect with consumers.

The Siduri Holographic Experience, built with Microsoft’s Mixed Reality Capture Studios technology, offers photorealistic images of Siduri founder Adam Lee, who is shown catapulting out of a wine bottle in a variety of immersive, three-dimensional segments — content that  the wine company called compelling and entertaining for shoppers.

The hologram version of Lee tells stories about the 25-year-old winery to capture the viewer’s attention in a lighthearted, immersive and educational way, Siduri said.

The launch of this augmented-reality tool comes as more retailers and brands are using visual commerce technology to impress consumers and spark sales.

Amazon, for instance, is among the U.S. retailers using live streaming videos to win over shoppers interested in cosmetics and other products. Other retailers are turning to virtual showrooms and trying to recreate the in-store shopping experience online — a task that has gained importance during the pandemic. Google’s newest retail push combines mobile shopping and videos with social media.

This move by Siduri offers another view of what’s coming with visual commerce — a trend that was hot well before the pandemic, and which promises to gain more energy going into 2021.

Siduri shoppers interested in the new feature can access it via a link or by scanning a QR code on the Santa Rosa, California-based company’s website. Next year, according to the wine provider, those QR codes will be on wine labels, making it even easier to use the augmented-reality technology.

“Siduri has always found ways to connect over wine without being overly complicated – it can be serious while still being fun,” Lee said. “Since founding Siduri, I wanted to break that preconceived notion that wine is too serious or snobby.”

Previously, this type of technology required the consumer use of special headsets or the downloading of apps, which could cause frustration among users. But the technology has improved to a point that such a service requires only that a consumer have a smartphone.

“With our [augmented-reality] expertise and Microsoft’s volumetric capture technology, the holographic projections once only possible in films like ‘Star Wars’ can now be experienced by anyone, anytime — no downloads, no applications, no friction,” said Patrick Johnson, CEO of San Francisco-based Rock Paper Reality, which helped design the new tool for wine shoppers.

Home Videos The WORLD of WINE – Wine News. Cheap wine, tasting notes and cooking with wine The World of Wine – May 2021 … END_OF_DOCUMENT_TOKEN_TO_BE_REPLACED

How to visit Napa Valley on a Budget. In this video Carson and I explain a few ways to enjoy Napa on the cheap. Tip and advice about how to visit Napa … END_OF_DOCUMENT_TOKEN_TO_BE_REPLACED

Home Videos Get To Know Argentina Wine | Wine Folly If you love Malbec, Argentina is your ultimate wine region. But that’s not … END_OF_DOCUMENT_TOKEN_TO_BE_REPLACED