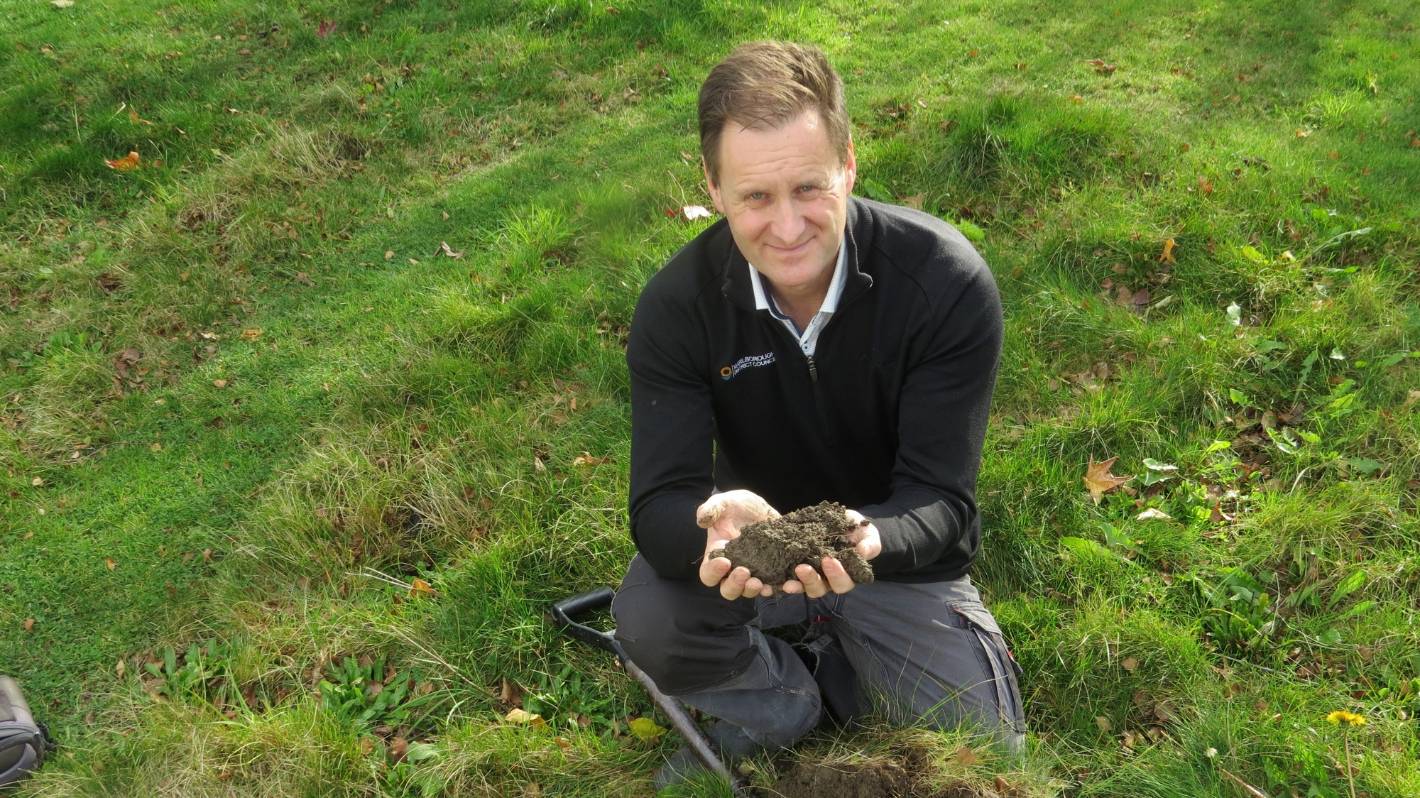 This article first appeared in Winepress magazine and is republished with permission.

Compaction under wheel tracks on vineyards is one of the concerns highlighted by a new Marlborough soil quality report, along with reducing levels of soil carbon under vines.

“Some vineyards are better than others, there is no doubt about it,” says Marlborough District Council environmental scientist Matt Oliver, who co-authored the report, presented to council last month.

The Soil Quality Monitoring Programme has been operating for 20 years, looking at pasture, cropping and viticulture soils, and has begun to clearly identify a declining trend in some soil quality parameters, according to the report.

Oliver says compaction is a “fallout of our current practices”, with wheel tracks constantly impacted by mowing, trimming and spray runs.

“The compaction is slowly getting deeper and deeper and harder and harder – you are cutting off your supply of nutrients to the vines.” That comes at a cost to business, he adds.

“The biggest impact is probably on the bottom line of the producers; on their profits.”

The degraded soil carbon levels mean growers not already doing so need to look at integrated management of the undervine area, he says.

“You bite the bullet and do something different, such as undervine mowing or cultivating instead of just spraying.”

A major issue raised by the new Marlborough soil quality report is the impact on soils of establishing new vineyards on what was pasture, including through spraying, cultivating, and earthworks around irrigation.

The report indicates that vineyard management can yield good remedial results, with three of the four 2020 vineyard wheel samples within the target range, and the observation of “good vineyard management practice in the form of well vegetated wheel tracks” observed during sample collection.

Compaction is also evident in vineyards other than the wheel area, “but seems to be dependent on the length of time a vineyard has been in production and the management regime”, says the report.

It also notes that compaction may be increased where vineyard soils are stony, due to heavy rollers used to bury stones.

Nurturing soil recovery is not a one size fits all process, and procedures need to consider soil types, vineyard management and the business model, with remediation designed to be “part of a profitable bottom line”, says Oliver.

It could mean replacing an undervine spray round with mowing, reducing the width of the spray strip, or reducing the number of tractor passes done, and the number done in the wet. Where viable, companies could consider the potential to reduce runs by using multi row machinery, he adds.

Other options available are the addition of compost and other organic matter, or using a side throw mower.

“None of this is new stuff,” says Matt.

“They are all well proven techniques.” He also notes that if companies are putting in place remedial measures, “they should institute them across their entire vineyard area”.

Another major issue raised by the report is the impact on soils of establishing new vineyards on what was pasture, including through spraying, cultivating, and earthworks around irrigation.

“That actually takes out a lot of soil carbon,” says Oliver.

“Within 18 months the area under vine will have suffered a reduction in soil carbon, and reduced ability to hold water and nutrients in the soil. And there are a whole lot of consequent problems with that.”

New vineyards are most vulnerable to soil compaction.

He would like to see growers consider the soil more when putting in new developments.

“Think about whether you need to do all that cultivation. Could you mulch or just spray the site then rip? If the cultivation is essential, think about how you can put back the soil carbon that you will lose.”

Going forward, he would like to see absentee landlords taking note of their soil stats, and for contracting companies to incorporate soil conscious practices in their management regimes, with a checklist looking at soil compaction and undervine soil carbon and spray regimes.

Oliver notes that viticulture is a relatively benign land use when it comes to water quality, but less spraying of drains would improve its footprint.

“How much money do we spend on spraying out the drains?” he asks. “Those are the sorts of things that have a material impact on water quality.”

Marlborough is in a good place environmentally, “and what we are talking about here is that, irrespective of what land use you indulge in, you have an impact”, he says.

“We are trying to become aware of what those impacts are and then address them.”

Home Videos The WORLD of WINE – Wine News. Cheap wine, tasting notes and cooking with wine The World of Wine – May 2021 … END_OF_DOCUMENT_TOKEN_TO_BE_REPLACED

How to visit Napa Valley on a Budget. In this video Carson and I explain a few ways to enjoy Napa on the cheap. Tip and advice about how to visit Napa … END_OF_DOCUMENT_TOKEN_TO_BE_REPLACED

Home Videos Get To Know Argentina Wine | Wine Folly If you love Malbec, Argentina is your ultimate wine region. But that’s not … END_OF_DOCUMENT_TOKEN_TO_BE_REPLACED