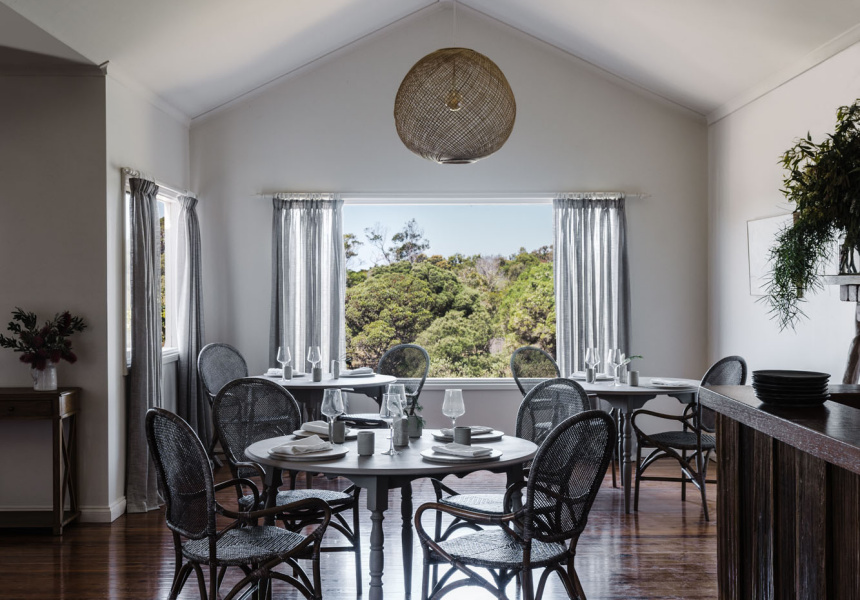 In the chaos that was 2020 you might have missed some of the new openings on this list – or not yet had a chance to visit them. Each of the dining and drinking destinations below is a short(ish) drive from Melbourne and worth building your weekend away or day trip around. Enjoy your dinner, lunch or drink with a side of coastal views, winery landscapes or produce practically right out of the wheelbarrow – or boat.

Attica’s Ben Shewry has set up Attica Summer Camp on a Yarra Valley property once home to Lillydale Estate winery. It’s here for a good time, not a long time, but he sees it as an antidote to a horrible 2020. “I wanted to create something that was really fun and energetic and felt good; something that was super kind,” he told Broadsheet. “We’ve all been through this terribly difficult time, but now we have something better to look forward to.”

It’s only an hour away from the city, and the food is comforting and fuss-free but with typical Attica pedigree. The setting, meanwhile, is verdant and lush. Expect a cosy, conservatory-like indoor dining room with floor-to-ceiling windows, views across the paddocks to the dusky hills and a pergola dripping in greenery.

To eat there’s charcoal-grilled chicken, and hasselback potatoes scored right the way through, slathered in butter and cooked rotisserie-chook style. Whole King George whiting and baby abalone are also done on the grill, and a big barrel smoker turns out hot-smoked king salmon and pastrami (served with hot sauce). It’s like the best barbeque you’ve ever been to.

Dessert is a big thing here – so big, in fact, it’s wheeled around on a trolley. There’s Cherry Ripe-inspired ice-cream; you’re given a tub, two spoons, and told to go for it. You’ll also find Tim Tams made with Four Pillars Breakfast Negroni (i.e. marmalade) and an exceptional lemon tart.

This compact 40-seat taqueria – in the former Cabinet Bar site on Little Malop Street in Geelong – is by chef Aaron Turner (Igni, The Hot Chicken Project), whose experiences of taco trucks in LA and bodegas in NYC have shaped his approach here. The space and the menu are snug. There are just four tacos (three meat and one veg) and a burrito (for customers who are especially hungry or ordering takeaway).

The al pastor taco is made with pork belly, and the chicken tinga taco has shredded chicken in a tomato, onion and chipotle sauce. Vegetarians can hook into tacos crammed with mushroom and huitlacoche, a fungus found on corn that’s also known as Mexican truffle.

Side dishes include street corn, chicken-fat rice with beans, and regional specialties such as birra (a beef consommé with shredded beans). And Turner’s left the tortilla-making to Melbourne’s peerless La Tortilleria.

As the name suggests, drinks are the other half of Tacos y Liquor. Find Margaritas, Palomas, mezcals and tequilas on high rotation. Beer and wine (red and white field blends from SA’s Vinteloper) are on tap, poured into rustic half-litre jars.

Brigitte Hafner and business partner James Broadway (of the now-closed Gertrude Street Enoteca) are behind Tedesca Osteria in Red Hill, amid the Mornington Peninsula hinterland. It’s one of the best – and most unique – dining experiences in Victoria. Ensconced in an early 20th-century weatherboard house overlooking 27 acres of lush farmland, the restaurant seats between 30 and 35 diners for intimate, slow-paced lunches.

The relaxed, five-course set menu is seasonal and changes fortnightly, but you can almost always expect fresh handmade pasta, and seafood and meat done in a woodfired oven. The wine list focuses on natural styles by local growers (there’s also a biodynamic vineyard on-site). Cocktails are made using native botanicals and rainwater.

In 2020 the fit-out was awarded Best Restaurant Design at the prestigious Eat Drink Design Awards. Raw timber is the focus – the jet-black kitchen bench, bar and private dining table are all crafted from ancient river redgum.

The coastal wetlands of Connewarre, where you’ll find Moonah, is around 90 minutes from Melbourne. The tiny diner opened in late 2020 and is by chef Tobin Kent.

The dining room fits just 12 guests at a time and the maximum group size is four people. “This allows us to create a very relaxed and intimate dining experience that we believe is very special and something not common enough,” Kent tells Broadsheet. He also suggests planning about three months in advance if you want to dine here. The restaurant releases bookings three months in advance on the first day of each month.

Last January, Flinders Lane Euro-Vietnamese diner Coda swapped the city for the surf, with a summery pop-up on the top floor of the Lorne Hotel. In December, it opened permanently in the same spot.

Coda Lorne is part of a three-in-one venue, with Movida on the ground floor, the pub on the second floor, and Coda up top. The restaurant is huge: 120 seats with sweeping views of Louttit Bay and the town of Lorne – and a deck where you can take it all in.

The menu is different to Coda’s city counterpart. It’s seafood-heavy and strictly Asian (the original mixes in French techniques and ingredients).

You might get an Appellation oyster with spanner crab and nam jim dressing; Goolwa pippies with lemongrass, mint and coconut curry; roasted barra with jungle aromats; or Spencer Gulf kingfish sashimi with olive, tamari and chrysanthemum.

This family-friendly spot in Sorrento is laid-back without skimping on the stuff that makes going out special: excellent atmosphere, a space you’ll want to linger in, and a menu full of hits.

It’s by Jerome Borazio (the “Jerome” behind St Jerome’s Laneway Festival, as well as Ponyfish Island and Back Alley Sally’s) and specialises in the type of killer Asian feasts easily accessible in the city, but a little less so in Sorrento.

The indoor-outdoor space – in a former brewhouse on Ocean Beach Road – has a ton of room. There’s a spacious, coastal-inspired mess hall; a sunny deck dotted with palm trees; and an easy-breezy lounge area (with a playground to keep the littlies occupied).

The star of the morning menu is a breakfast banh mi with pork, a fried egg, hoisin and pickled carrot and daikon. And out back is Prawn Stars, a prawn shack where you can pick up buckets of fresh Mooloolaba prawns – at wholesale prices – for takeaway only.

Common Ground Project is a social enterprise and community farm from the Mulberry Group (Liminal, Dessous and Hazel in Melbourne, and The Beach House in Geelong). And La Cantina is its new on-site restaurant.

It’s helmed by husband-and-wife team Lolo Hanser and Glenn Laurie, who both worked at The River Cafe in London – one of the world’s most famous Italian restaurants.

The Italian menu changes with the seasons, and leans on produce grown at Common Ground. It’s structured traditionally: there’s an antipasti section of cured meats and cheeses to start; a primi section comprised of handmade pastas; a secondi list of larger meat, fish and vegetable dishes; and a number of sides. Think pumpkin, mascarpone and ricotta ravioli in sage butter; stracciatella-starring spinach risotto; grilled lamb leg with chickpeas and salsa verde; and a simple lemon, parmesan and rocket salad.

This destination diner in the Yarra Valley reinvented itself in 2020 after chef Teage Ezard left and the Jreissati family, which runs the winery, took over. It now has more of a cellar-door vibe; gone are the white tablecloths and the split between fine diner and all-day bistro. The focus is on food that matches the area and estate’s wines – “Yarra Valley medium-bodied, balanced-form wines,” according to chief winemaker Paul Bridgeman; he says they have “that food-friendliness”.

The menu draws on the Lebanese heritage of the Jreissati family. And Broadsheet editor Chynna Santos says the seasonal snack plate shows it off best. It might include potato flatbread sprinkled with za’atar and sesame; chickpea crackers with hummus, black-garlic baba ganoush, and tahini labneh; or lamb koftas with polenta chips.

Each item on the sharing menu is listed alongside the wine it pairs best with. The kingfish ceviche with bush-tomato baharat (a Middle Eastern spice mix) and macadamia goes with the estate’s 2013 Blanc de Blanc. The rich truffled goat’s curd cappelletti with raisins and pine-nut burnt butter matches with the 2017 Katherine’s Paddock Chardonnay.

For the past decade, Cumulus Inc co-founder Jayden Ong has been making wines in the Yarra Valley. And in 2019 he was named one of the top 12 best young winemakers in the Young Gun of Wine Awards.

He and wife Morgan Ong have just opened the doors to their very own winery and cellar bar in Healesville. Pull up a seat in the expansive space (with an 8.2-metre centrepiece limestone bar and impressive floral installation) or nab a spot outside in the sunshine.

On pour are wines from each of his four ranges – Moonlit Forest, One Block, La Maison de Ong and Jayden Ong – as well as from other top Yarra Valley producers. A tip: book a $20, five-wine tasting led by Ong himself.

Food-wise, the largely charcoal-fired menu is sourced from neighbouring producers where possible. It might feature friggitello peppers, lion’s mane mushrooms on bay sticks, duck meatballs with fresh plum, or figs with curd and honey.

This new brewery in Castlemaine, by two ex-Stomping Ground brewers, opened at the end of 2020 – with a beer garden that can hold 300 at the rear of the art deco, 1850s-built Theatre Royal. But it’s also set up for the colder weather ahead: “We just turn all the taps on inside, put the table-tennis table out, light a fire out the back – it’s a super flexible space,” says brewer and co-founder Conna Mallet.

There’s a bandroom and a roomy main bar – and taps throughout pouring Love Shack’s core range of lager, pale ale and IPA, as well as specialty options, which at the moment include a basil-and-strawberry sour and a low-alcohol red IPA (it has just been brewed and will be ready in a couple of weeks). The menu involves around 15 different Roman-style pizzas from the Theatre Royal and beer-friendly bites such as fries.

Home Videos The WORLD of WINE – Wine News. Cheap wine, tasting notes and cooking with wine The World of Wine – May 2021 … END_OF_DOCUMENT_TOKEN_TO_BE_REPLACED

How to visit Napa Valley on a Budget. In this video Carson and I explain a few ways to enjoy Napa on the cheap. Tip and advice about how to visit Napa … END_OF_DOCUMENT_TOKEN_TO_BE_REPLACED

Home Videos Get To Know Argentina Wine | Wine Folly If you love Malbec, Argentina is your ultimate wine region. But that’s not … END_OF_DOCUMENT_TOKEN_TO_BE_REPLACED