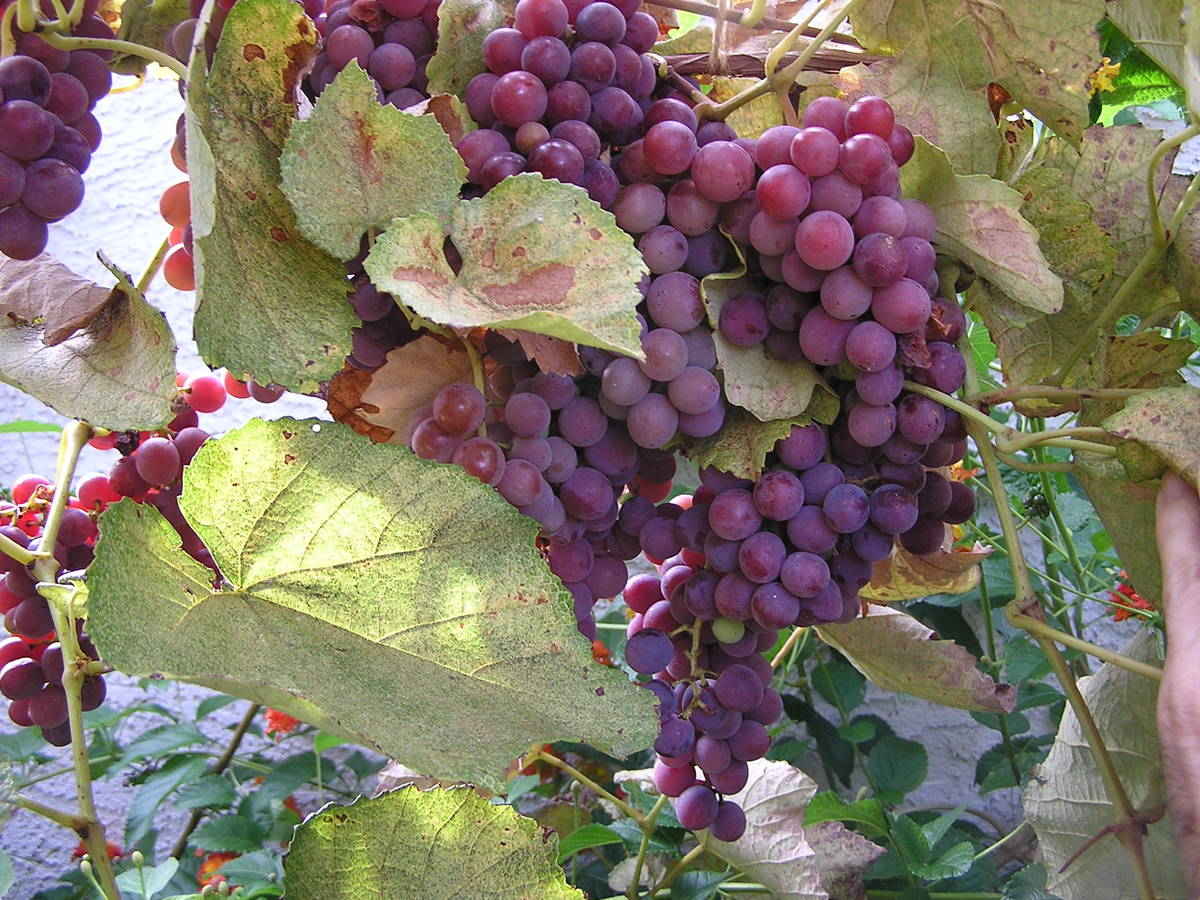 Whether you are growing wine grapes or table grapes, it’s a good idea in our climate to delay the final pruning until you are confident that freezing, dry and windy weather has passed. The reason for this is to minimize fruit loss because of weather conditions in late winter and early spring.

Some grape bunches — zinfandel, syrah and muscat for instance — grow from buds very close to where last year’s growth began. These types of grapes are spur pruned, leaving less than an inch of growth remaining from last year.

With other varieties of grapes — Thompson seedless and Concord grapes for instance — their bunches grow from buds several inches farther out along last year’s growth. These types of grapes are cane pruned because last year’s growth is left longer, 6 to 10 inches in length. That allows the unproductive buds to grow without producing any fruit.

I delay pruning grapes in our cold desert climate as late as I can. Sometimes even after new growth is well underway. Delaying the pruning this long lessens the chance of fruit loss because of freezes and cold drying winds.

In the Las Vegas Valley, final pruning may be delayed until late February up until the first week in March. If you want to be doubly sure and a bit lazy about it, delay final pruning until fruit bunches show you where to prune. That might be as late as mid- to late March.

This doesn’t mean you can’t do some pruning earlier. Just be careful and not remove too much of last year’s growth. It’s OK to leave last year’s growth about 12 inches long and cut it shorter when you are confident new growth is about to begin or later.

Q: I have a grape, with dark-colored fruit, growing on my established trellis. It’s already pruned. What should I do to it now?

A: Of course your grape plant will need water and fertilizer when it starts growing in March. I would apply the fertilizer the first week of March and begin watering weekly during February.

Which fertilizer to use? Any fertilizer used for fruit trees will work. It’s applied where the water is delivered to the plant but at least 12 inches away from its trunk. I prefer using a rich compost as a fertilizer instead, but it must be watered beyond any surface mulch so it comes in contact with the moist soil underneath it.

Grapes grow better in the hot desert if there is “plant litter,” surface mulch, on top of the soil where they receive their water. A surface mulch of 3 to 4 inches deep helps keep the soil surrounding their roots moist and cool. Wood chips from landscape trees make an ideal surface mulch for grapes and fruit trees because they easily rot and decompose into the soil.

It’s helpful to determine if your grape should be spur pruned or cane pruned. Bunches of grapes are always produced along last year’s growth. The difference when pruning different types of grapes is where the fruit is produced along this new growth.

Spur-pruned grapes produce their bunches at the base of last year’s growth. Cane-pruned grapes produce their bunches from buds farther out from this. Buds that produce grape bunches farther out, when spur pruned short, are void of grape bunches. Pay attention to your variety of grape and whether it prefers spur or cane pruning.

The simplest way is to delay pruning until you see grape bunches starting to form. I know it can be heart-wrenching, just like thinning peach trees, but removing extra bunches will make each of the berries in the grape clusters larger.

When it’s an unknown grape variety I’m not sure about, I look for old grape clusters, remnants, produced last season. These can be subtle differences and not obvious to the casual observer. Count back the number of bumps, or buds, where the remnants were attached to older growth.

Do this in several locations and get an average distance from where it grew. That tells you where you can safely prune last year’s growth and how much can be removed. Doing this can suggest if a grape should be spur pruned or cane pruned in the future.

Q: Two years ago I had grape bunches that were shriveling up in the middle of summer while they were still green. I think it was a disease, but it spread and killed off nearly all my grape bunches. How can I prevent this in the future?

A: Grapes don’t typically get borers, but they can get diseases that attack the bunches or young stems. Another disease attacks the new growth. The other problem commonly found on grapes grown in the desert is damage from intense sunlight.

The most common diseases of grape bunches are the so-called powdery and downy mildews. You will not see them, but the disease is flourishing, invisible, right under your nose.

That might be a problem later with grapes when there is snow or rain falling on the new growing vines in the spring. It will cause the bunches to die green all of a sudden.

During February and March, hope for dry weather when grapes are first starting to grow. If this kind of weather is present then, it’s a good idea to spray a fungicide two or three times during the growing season to prevent bunch diseases like these from becoming a problem.

Spray the first dose when bunches are small to protect them from infection. The usual fungicides for homeowners are copper fungicides like Bordeaux. And for heaven sakes, when you are pruning, sanitize your pruning shears

Damage to the bunches or older stems from intense sunlight is not a big problem if grape stems and fruit are grown in the shade of their own leaves.

Q: Which varieties of grapes are the best to grow in the Las Vegas Valley?

A: The best choices, or varieties, for grape growing in Southern Nevada are those grapes that prefer to grow in hot weather. Recognize that grapes are grown for fresh eating, oftentimes seedless, or grown for their juice, such as wine grapes.

Some examples of table grapes that grow well in hot weather include Thompson seedless, Flame, Concord, Fantasy and Black Monukka. Others may also be a good choice, but these should get you started.

Juice or wine grapes that can be grown for their juice for making wine or jelly include zinfandel, muscat, syrah, grenache, barbera and many others. I would be very careful growing the so-called cool-season grapes such as the cabernets, pinots, gewurztraminer, merlot and others. That being said, I have had good luck growing a few of the so-called cool weather grapes such as pinot noir.

Bottom line, check to see if they are warm-season grapes or not. If they are, your chances of success are better than the cool season grapes.

Q: Last spring, I planted two Early Girl tomatoes. In the middle of July, I cut them back to about 8 inches, and they come back and give me a second crop in the fall. They usually die in the middle of December but not this year. Should I replant this spring with new plants?

A: Not necessary to replant. Tomatoes are a perennial crop that can get several years old in the tropics and are still productive. They will continue to be as productive as young plants if pruned back again this spring as you did before.

The big advantage of existing plants is in their established root system. They don’t have to expend energy to re-establish roots. This means the tops will grow faster and be productive.

Tomatoes prefer temperatures from about 65 to 95 degrees. It’s just cold for these warm-weather vegetables right now.

Clean and sanitize your garden shears and cut plants back to about 8 inches again in late February or early March. You can do it anytime you are confident temperatures are starting to warm up again. Add fresh compost, water and fertilizer, if needed, to get them back on track and flowering.

Bob Morris is a horticulture expert and professor emeritus of the University of Nevada, Las Vegas. Visit his blog at xtremehorticulture.blogspot.com. Send questions to Extremehort@aol.com.

Home Videos The WORLD of WINE – Wine News. Cheap wine, tasting notes and cooking with wine The World of Wine – May 2021 … END_OF_DOCUMENT_TOKEN_TO_BE_REPLACED

How to visit Napa Valley on a Budget. In this video Carson and I explain a few ways to enjoy Napa on the cheap. Tip and advice about how to visit Napa … END_OF_DOCUMENT_TOKEN_TO_BE_REPLACED

Home Videos Get To Know Argentina Wine | Wine Folly If you love Malbec, Argentina is your ultimate wine region. But that’s not … END_OF_DOCUMENT_TOKEN_TO_BE_REPLACED