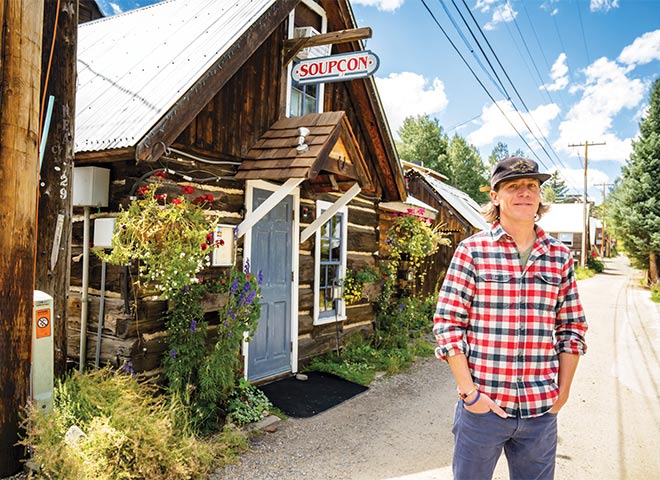 Dancin’ Dan’s nickname isn’t from the big smile he usually has, or because he breezes through life, sashays down the ski slopes or because he’s just a happy-go-lucky kind of guy. Its origin goes way back to his childhood days when, at six years old, he decided he wanted to fancy foot it and take dance lessons. The name, Dancin’ Dan, has fittingly stuck with him all these years.

“My sister was taking dance and being an inquisitive six-year-old, and I wondered what was going on behind the curtain on stage. I took tap and jazz lessons for 10 years of my childhood. It was a little more expensive than hockey so that didn’t go over very well with my parents, but they were encouraging.” Dan quit lessons when he was 16 because, he laughs, “It turns out that when your name is Dancin’ as a young child, it’s not that cool. Imagine being in a hockey locker at 10 and being called Dancin’ Dan and how the other kids dealt with that.”

Growing up in Des Moines, Iowa, Dan’s entire extended family played a lot of hockey and baseball. “We have a big family, like 30 cousins.” As far as growing up in a metropolitan area, Dan says, “In the world of cities, it’s not a city at all, maybe half a million people.” School wasn’t his favorite thing, he confesses. “I would rather have been playing hockey and hanging with my friends.” He graduated in 2001 with not a clue as to what he wanted to do but he enrolled in Des Moines Area Community College, which lasted for six months before he bolted to Boulder. “I had friends there and wanted to be out West and I was ready for change. I was very good at the college lifestyle,” he grins and confirms, “but school wasn’t my favorite thing. I was 19 years old and being reckless.”

Dan wanted access to the mountains so he could snowboard. “I started boarding in high school on random small-hilled resorts in Iowa.” Meanwhile, back in Boulder, he was waiting tables at the Cheesecake Factory during the winter of 2002.

One day, he and a childhood hockey buddy, who was now playing for Western State College (now Western Colorado University) crossed paths in Denver. ”We got loaded and had a good time. I wasn’t happy and I wasn’t enjoying the city,” says Dan of his brief move to Denver. When his buddy told him that a roommate was moving out in a month, Dan jumped on the Gunnison opportunity, exclaiming, “I’ll be there in two weeks!”

“I moved to Gunnison with a box, a backpack and a lamp, recalls Dan. The next day, he came up valley to Crested Butte where, he says, “It clicked for me, it made sense.” He got a summer job at The Trough in Gunnison and that winter started working as a cook for CBMR at the Paradise Warming House. “The whole point was getting the pass. I was hitchhiking to work, back and forth to Gunnison, for three years.” He moved to CB on July 5, 2005.

One summer, Dan trekked off to Alaska, citing the high wages made working in the fishing industry there. “I lived on Prince of Wales Island, where you have to take either a float plane or boat to access it. It’s definitely isolated.” Dan was working shoreside operations at a charter fishing lodge. “Processing and shipping a lot of fish for fishing tourists. They pay well, feed you and board you but it was a lot of work every single day, so I didn’t do a lot of outdoor things,” he explains.

Dan returned to CB in the fall, working at the Grand Lodge. It was in the fall of 2008 that he went to work at Soupçon, initially as a back waiter. In the time since, Dan became a server and now, he’s the wine director. “I developed the wine director position in 2015 because I had begun to take wine very seriously in my life and knew I was interested in trying to make a career out of wine.”

Dan notes that working with the long-term staff and then owner Jason Vernon at Soupçon taught him tremendously. “Wine studying itself is something you have to take upon yourself. You read a lot of books and taste a lot of wine. There are tests you have to take to achieve sommelier and there’s a court of master sommeliers who give the tests. It’s all about learning wine rules and the geography of where and why wines come from where they come from.” As wine director at Soupçon, he jokes, “I’m basically a well dressed bus boy who sells wine.”

With his love and knowledge of wines, Dan started his business Elevated Wine Source (elevatedwinesource.com) five years ago, offering his services to others as a wine cellar consultant. “I stock and manage private wine collections in Colorado,” he says of his clients in Denver, Telluride and various other places, although most of his clients are in the Crested Butte area and Gunnison Valley. “I saw it as an education situation because it was an opportunity to see different wines and producers I didn’t know.”

He realized with his first clients that there were probably more people who could benefit from this service. “Taking care of a wine collection means organizing, inventorying and developing a plan for storage from short-term to long-term. Most of my clientele’s wine is for consumption. Every wine collection is so different because each person wants their collection based on what they like. I learn about a client’s flavor profile, the wines they like and then you can expand and teach them about different parts of the world with regards to wine. I feel very lucky that I get to be passionate about what I do everyday.” Dan’s also at Soupçon five nights a week sharing his wine pairing expertise.

Like most locals, Dan works hard and long but certainly gets to do the things he loves. “The year before COVID hit, I caught the travel bug and spent six weeks in South America, mostly Peru and Chile. Peru stole my heart, the people were amazing, the food is world-class and the mountains are all-time. You can get up to 20,000 feet quickly in the Andes.” He then went to the Philippines to dive for six weeks. “That’s all I did. I got certified over there for open water, advanced and enriched air. I was diving 100 feet and seeing turtles, sharks and coral,” he says of his island-hopping adventure. When he’s able to travel again, Dan is planning a trip to Italy and France for wine and hopefully, sometime in the future, New Zealand. “I’d love to get back to South America and skiing in Canada. I want to go everywhere in the world, it’s a massive place,” he smiles. He recently completed his fifth trip down the Grand Canyon, and as he puts it, “I’m a whitewater enthusiast.”

“Crested Butte is home, no question about that,” says Dan. “I’m a die-hard ski bum who figured out that wine can enable me to do the things I love,” he says, and he was fortunate to have recently found an affordable rental house on the notorious Bad Girl Alley in town. “I was in my last house on Third Street for a decade. It was a dump but the landlord put it on the market, so I had to move out. But it’s all good. It sucked to have to move in July but it shined a bright little light on some changes I think I needed in my life. My current landlords were wine clients of mine and I met them at Soupçon, then they became friends,” he says of the second homeowners who decided that renting to a local would benefit the community. “When I moved to the valley, I definitely met the best friends of my life. The core group of friends, we’ve all found our niche, you figure out what you have to do to make it work. Life is all about costume changes. I am a CB citizen, a dirtbag who loves to live in the woods and have fun with my friends, but I put on a suit and I aspire to be the best at what I love. We all wear many different costumes in this town.”

Home Videos The WORLD of WINE – Wine News. Cheap wine, tasting notes and cooking with wine The World of Wine – May 2021 … END_OF_DOCUMENT_TOKEN_TO_BE_REPLACED

How to visit Napa Valley on a Budget. In this video Carson and I explain a few ways to enjoy Napa on the cheap. Tip and advice about how to visit Napa … END_OF_DOCUMENT_TOKEN_TO_BE_REPLACED

Home Videos Get To Know Argentina Wine | Wine Folly If you love Malbec, Argentina is your ultimate wine region. But that’s not … END_OF_DOCUMENT_TOKEN_TO_BE_REPLACED