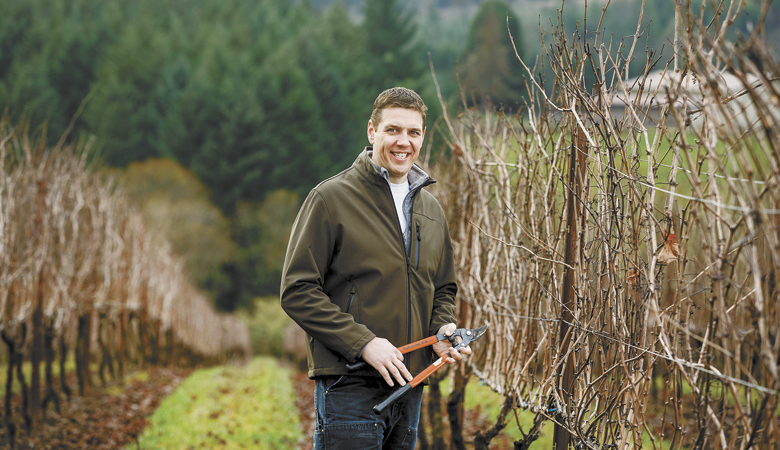 Leonardo da Vinci coined the term “craft,” defining the marriage of art and science. America’s growing craft wine scene reflects this ingenious union of passion and practicality, but with a twist.

“We have a farm culture that’s different than other places in the world,” contends Carole Lawson, founder of the Craft Wine Association. “We have regional foods or interpretations of food in our communities across the country, which are different from one place to another. The personality of the communities shows through the wines here, as they do in France or Spain, or any other place around the world.”

Lawson founded the “distinctly American” association in 2016 to celebrate this cultural “personality” of wine. Membership spans the U.S., including eight in Oregon.

Mostly family-owned, craft winemakers produce fewer than 5,000 cases annually; many move to winemaking from other careers. Some hone their skills through mentors and local wine studies programs. All cite strong community ties as key to their success.

A fortuitous meeting with an American Legionnaire in 2008 spurred Veteran Ben Martin to establish Dauntless Wine Cø. in Forest Grove.

“He made mention of this vineyard and winery the Legion had (Domaine du Capitaine Danjou),” recalled Martin. “He was thinking about moving back to France to stay there. At a basic level, our missions are the same: to take care of our own. Our end goal is to be able to house veterans interested in agriculture (particularly viticulture) as an alternative therapy method.”

Additionally, Martin seeks to educate veterans about benefits and rights, including USDA loans to buy land and grow grapes. “Veterans have a unique mindset and skillset, which translates into farming very well,” said Martin. “Veterans know hard work, attention to detail and grueling hours, and have a can-do attitude. These are all characteristics a farmer needs in order to thrive. The problem is [that] becoming a farmer without land, let alone experience, is very difficult; there is a lot of red tape and risk, and banks typically won’t even entertain the idea.”

To that end, Martin also works closely with the Farmer Veteran Coalition (FVC) to educate, network, brainstorm and provide grants and tractors as seed capital to veterans. The agency also share links with other agricultural sectors like the USDA

“Our first vintage was in 2015, and we had no experience in making wine or selling it,” recalled Martin. “We had no customers or cash flow. Things were tight at best! That’s when we became certified by the FVC as a value-added producer and were awarded a $5,000 grant to bottle up our first vintage. Without the FVC, I’m not sure how we would have been able to get that wine into bottle!”

Martin and his wife, Carrie, recently celebrated six years in operation. “However, our path to this point has been long and twisted — in our six years of operation, we have made wine at three different facilities,” he said. Currently, Dauntless vinifies at Laurel Ridge Winery near Carlton. “In fact, the founder of Laurel Ridge, David Teppola, was a veteran — and the current winemaker, Lucas Robbins, is also a veteran,” Martin explained. “Before that, we made wine at ADEA and A Blooming Hill Vineyard, both of which are/were owned by veterans as well. It’s been reassuring to work with like-minded individuals since day one.”

Currently, Martin sources 95% of his grapes from Jesse Estate Vineyards in the Chehalem Mountains AVA. Moreover, Dauntless recently secured a 6.5-acre high-elevation site in the Laurelwood AVA, with plans for a 3.5-acre vineyard and 2,000-case production facility there. Once settled, Martin anticipates sourcing fruit from other veteran-viticulturists around the Willamette Valley and Washington state.

Ultimately, Martin praises the local community and the Oregon wine industry for supporting their veteran-centric brand. “There were many times when I wondered if this was a viable project; there were so many times when a critical failure would have put us under,” Martin noted. “But when times were their darkest, we seemingly had some sort of divine intervention that would open a door for us to continue. I’ve worked in a [handful] of different industries, and the Oregon wine industry, in particular, has a level of camaraderie not seen anywhere else. The wine industry is incredible.”

Consider a chance phone call from a colleague to mark the beginning of La Randonnée in Hillsboro. “My good friend, David Polite, of Carlton Hill Vineyard gave me a ring,” recalled founder Kevin Green. “He had some fruit available for me and wondered if I was interested? I jumped at the chance.”

La Randonnée means “walk” in French, referencing Green’s trek toward winemaking. A self-described “logical person,” who typically makes “very analytical pros/cons decisions,” Green admits to a “rebel streak” regarding big decisions like work. “I was much more in the ‘path-less traveled camp.’ And here I am! More specifically, I wanted to get back to using ‘all of Kevin’ — mind, body, spirit.”

Green works exclusively with sustainably certified vineyards. “Both my parents grew up on farms in Iowa, and I can see the necessity of leaving the land better than one found it — for intergenerational farming opportunities,” he said.

Due to the winery’s small size, Green and wife Clodagh handle all management aspects of La Randonnée, from appointment-only tastings to fulfillment, delivery and shipping. Green maintains the rewards of making craft wine far outweigh the burdens. “The greatest reward is talking directly with consumers of our craft, seeing and hearing their enjoyment and curiosity.”

La Chouette Vineyard reflects one couples’ commitment to a life well lived. Native Oregonians Michelle and Ben Miller traveled the world early in their careers. Their time in Europe introduced them to a lifestyle centered on food, wine and friendship.

“As school, Army and work took us to new places, including Washington state, Europe and Kentucky, we still spent our family vacations in Oregon, scheming about where we might eventually want to settle down,” said Michelle Miller, an interior architectural designer by training.

Upon purchasing, the couple and daughter Jessa set about restoring the barn, where they now raise chickens, grass-fed Angus, sheep and French Alpine dairy goats. Next, Michelle designed their Euro-style aerated concrete-block home, replete with stucco, stone and slate finishings.

Initially, winemaker Matt Shown at Brigadoon Wine Co. in Junction City custom-crushed La Chouette’s wines from 2013 to 2017. “We have a great relationship with Brigadoon,” said Michelle, “but as both brands grew in production, they needed to produce only their own, and we needed to find a new winemaker and larger facility.”

Enter winemaker Drew Voit. He and his team produce about 450 cases annually at Björnson Vineyard in the Eola-Amity Hills — the Millers count Mark and Patty Björnson as good friends. La Chouette also sells fruit to Bjornson, as well as William Rose and Great Oregon Wine Co.

On the sidelines, Michelle juggles winery management, while Ben serves as a full-time anesthesiologist at Salem Health Hospital. In addition, Michelle runs a limited professional design practice and co-ownership of The Arbor, a home, garden, gift shop and licensed tasting room in downtown Salem.

“Being small has its challenges. We are limited by time and finances,” acknowledges Michelle. But privileges, too. “I just saw our barn owl peering from the loft rafters today.”

Micro-boutique Résolu Cellars in Beaverton started with a dream. “When our lead winemaker, Scott Nelson, began dabbling in winemaking as a hobby, it didn’t take much to seed the dream of being a commercial venture,” said Kathie Nelson, Résolu’s brand ambassador, and marketing and sales director.

“As an artisan, Scott is self-taught and had strong mentors in the early days,” Kathie explained. “He approaches the craft with high touch, relying on his sense of smell, taste and sight to assess and produce the best each vintage serves up.” Cameron balances the scientific side with a degree in enology from Chemeketa Community College Northwest Wine Studies.

“Emerging as a craft winery, we’ve been challenged by our small space and lack of a formal tasting room,” Kathie admitted. “While it is a challenge to limit the 14 wines we produce each year, it also provides us with a focus.” Unlike most Willamette Valley craft wineries, Résolu produces a triple-threat roster of Pinot Noir, and Tuscan- and Bordeaux-style blends from fruit sourced within the Willamette Valley and Washington state’s Columbia Valley.

“Bottom line, craft producers are a small business,” Kathie concluded. “Staying on top of the wine business, the legislation in the industry, marketing and sales, along with all the production is like having many balls in the air. Like every other small business, we depend on and value our collaborative network.”

The Craft in Craft Wine

For many Willamette Valley winemakers, Chemeketa Community College Northwest Wine Studies Program proves the linchpin for launching their wine careers — the Southern Oregon Wine Institute at Umpqua Community College serves that part of the state in the same capacity. ”It’s very much like a trade school, since students learn in a functional vineyard and winery, and are familiar with these operations,” explained Ben Martin of Dauntless Wine Cø.

But for Scott Dwyer, a Chemeketa adjunct instructor, craft winemakers teach other program members something, as well. “For me, I’ve had a hard time defining craft in wine,” he conceded.

As a result, Dwyer draws on lessons learned from his father, a contractor. “My dad was someone I would consider a craftsman.” In addition to custom homes, Dwyer’s father also built hundreds of commercial buildings, “He confided in me once that those were the buildings that excited him the most. When I asked, his reasoning was that buildings are not like recipes, even with the most skilled engineers and architects. So, when you’re putting it all together, there are always problems, and solving those problems is what he enjoyed the most.”

That insight sparked Dwyer’s epiphany regarding craft winemaking: “One of the things I enjoy most about winemaking is the problem solving. It took me awhile before I really connected his explanation of construction to craftsmanship. Once I did, I began to think of “craft” as being defined largely by personal leverage.

“To me, the hallmark of a craft winemaker is someone who leverages all the financial, physical, and/or intellectual capital they have in the hopes of creating the best possible product. Regardless of the organization, cases produced or berries hand-destemmed, it’s about investing yourself in a way that challenges your comfort.”

Home Videos The WORLD of WINE – Wine News. Cheap wine, tasting notes and cooking with wine The World of Wine – May 2021 … END_OF_DOCUMENT_TOKEN_TO_BE_REPLACED

How to visit Napa Valley on a Budget. In this video Carson and I explain a few ways to enjoy Napa on the cheap. Tip and advice about how to visit Napa … END_OF_DOCUMENT_TOKEN_TO_BE_REPLACED

Home Videos Get To Know Argentina Wine | Wine Folly If you love Malbec, Argentina is your ultimate wine region. But that’s not … END_OF_DOCUMENT_TOKEN_TO_BE_REPLACED