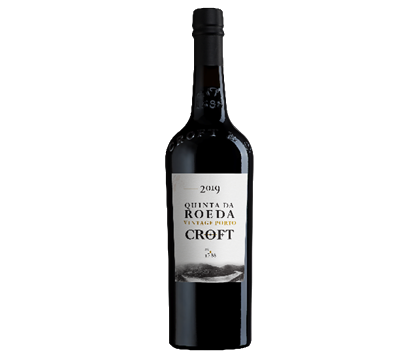 Croft’s winemaker, David Guimaraens, remarks: “Roêda is an outstanding property, which includes some old vineyards of great historic interest.  These contribute to the wonderful richness of the Roêda Vintage Ports, which really stand out for their aromatic complexity.”

Deep reddish black at the core with a broad ruby rim.  On the nose the fruit is ripe and succulent, with cherry and strawberry aromas combining with jammy blackberry and blackcurrant notes, but there is plenty of freshness to balance the opulence of the fruit.  The exotic resiny, herbal character typical of Roêda, with notes of eucalyptus and mint, is clearly in evidence and there is also an attractive scented dimension with hints of dried rose petal and cedarwood.  However, the spotlight remains on the soft, opulent fruit which emerges again on the palate and carries through into the long finish.  Although the palate is round and supple and the tannins velvety and discreet, the fresh acidity gives the wine firmness and vigour.  A Vintage Port in the Roêda tradition, captivating, seductive and easy drinking but with plenty of depth and background.

NOTES ON THE 2019 VITICULTURAL YEAR AND HARVEST

After a warm and dry period of dormancy, the vineyard cycle began slightly early with budburst on 9th March, about a week ahead of the usual calendar.  Overall, the growing season was drier and cooler than average although the usual April rains were quite heavy, with around 98 mm of precipitation. The grapes began to change colour (véraison) at around the usual time in mid-July.  Although the ripening season began with high temperatures, the weather in the critical month of August was cooler than average with some rainfall on 25th and 26th to balance the ripening of the grapes.  The relatively cool conditions and absence of excessive temperature peaks have translated into the elegance, crisp acidity and ‘singing’ fruit that we find in the 2019 wines.  Harvesting of red grapes in the eastern areas of the Douro began in hot weather on 4th September and at Pinhão on 14th. The crop was perfectly healthy and in excellent condition although yields were almost a tenth lower than the 10-year average.  The wines were attractively aromatic, with a high natural acidity and greater than normal colour intensity.

One of the original founding port houses, Croft traces its origins to 1588 when the company was established in England by Henry Thompson, a member of the Merchants Company of York. The Croft family, which joined the partnership in 1736 and gave the firm its present name, served the port trade with great distinction. A book published by the firm reveals much new research into the company’s long and fascinating history. The reputation of Croft as a Vintage Port producer derives to a large extent from its ownership of Quinta da Roêda, one of the finest estates in the Douro Valley, and from such legendary wines as the Croft 1945, recognised as one of the finest of that landmark year. In September 2001, Croft became part of The Fladgate Partnership, the family run group which also includes the famous Taylor’s and Fonseca port houses.

Quinta Da Roêda forms a vast sweep of terraced vineyard located on the north bank of the Douro just upstream from the village of Pinhão. The estate has long been regarded as one of the finest of the Douro Valley estates. The 19th century poet Veiga Cabral wrote, ‘If the Douro may be called the golden ring of Portugal, then Quinta da Roêda is the diamond set in that ring.’ The estate was acquired by Croft in 1889 and was extensively renovated by the firm, with replanting continuing throughout the first half of the 20th century. Since Croft’s return to family ownership, with its incorporation into The Fladgate Partnership, the property has again been the source of major investment. This includes the building of traditional lagares (granite treading tanks) allowing the reintroduction of foot treading, still unsurpassed as a method of extraction for Vintage Port. The character of Croft Vintage Ports is one of the most individual of all. Scented, exotic and crammed with luscious opulent fruit flavour, they develop great richness and complexity with age. Quinta da Roêda is at the heart of this distinctive house style. Its wines always form the base for the Croft Vintage Port blend and, in the case of the 2019, all the components of the blend in fact come from the property, including wines from the estate’s extensive terraces of old vines. Before dams tamed the Douro in the last decades of the 20th century, it flowed over a series of treacherous, fast running rapids. One of these was located on the curve of the river in front of Quinta da Roêda and the sound of the water rushing over the boulder-strewn riverbed could be heard throughout the vineyard. The name Roêda is said to be derived from the word that described that sound, ‘arrueda’.

Founded in 1944, Kobrand Corporation remains one of the few family-owned wine and spirits companies in the United States. Kobrand’s portfolio was meticulously selected according to a single, unerring principle: quality. This continued focus has made the Kobrand name synonymous with wines and spirits of the highest caliber for 75 years. Kobrand is the exclusive agent for an outstanding selection of fine wines, spirits, and sakes from key regions around the world, including the United States, France, Italy, Spain, Portugal, Germany, Japan, Chile, Argentina, and New Zealand. For more information about Kobrand and the portfolio visit http://www.Kobrandwineandspirits.com.

Home Videos The WORLD of WINE – Wine News. Cheap wine, tasting notes and cooking with wine The World of Wine – May 2021 … END_OF_DOCUMENT_TOKEN_TO_BE_REPLACED

How to visit Napa Valley on a Budget. In this video Carson and I explain a few ways to enjoy Napa on the cheap. Tip and advice about how to visit Napa … END_OF_DOCUMENT_TOKEN_TO_BE_REPLACED

Home Videos Get To Know Argentina Wine | Wine Folly If you love Malbec, Argentina is your ultimate wine region. But that’s not … END_OF_DOCUMENT_TOKEN_TO_BE_REPLACED